From the USA to Kenya: One Trailing Spouse

Hi, I'm Emily.  I'm a writer, reader, traveler, and trailing spouse from the U.S. My husband and I met as Peace Corps volunteers in Vanuatu (in the South Pacific).  After he and I had worked for a few years and gone to grad school, he was offered his dream job.  I left my [albeit crappy] job to follow him on his career path.  We're currently living in Nairobi, Kenya.

1. Why did you move abroad?
The short answer: for my husband's job.  The longer answer:  he and I have both spent quite a bit of time abroad (as students and as Peace Corps volunteers).  We enjoy living in foreign countries and so we were excited when he got his current position, which involves a lot of international travel and the potential to live abroad.  When he got the chance to work in Nairobi, we were very excited.

2. How do you make a living?
I'm a trailing spouse, and I can't get a work permit in Kenya.  That being said, I do work part-time as a freelance writer, mostly for American education companies.  (My background is in teaching.)  I worked full-time as a freelancer in the U.S. before we left, but pulled back on the work when we first arrived in Nairobi because I had heard the internet was very slow and unreliable.  I didn't want to let my clients down.  Now that I've seen that the internet speed isn't too bad, I'm pursuing more freelance writing work.  I also do a lot of unpaid writing- I blog, and I'm working on the first draft of a novel.

3. How often do you communicate with home and how?
My husband and I have moved 4 times in the past 5 years, so we're adept at keeping in touch with friends and family.  I use Skype and Facetime when my internet connection is fast, and I use email when it's slow.  I also do silly things, like play Words with Friends and Draw Something (apps on my ipad).  Those small, frequent interactions help me feel closer to people when I'm away.

4. What's your favorite thing about being an expat in Nairobi?
I love being able to take weekend trips in Kenya.  It's amazing to be in Nairobi in the morning, and then be driving through a national park and watching lions hunt zebra in the afternoon.

5. What’s the worst thing about being an expat in Nairobi?
I don't think this is Kenya-specific, but for me, the worst thing about living in a developing country is getting sick.  Between the air pollution, the questionable food I sometimes eat, and the questionable hotel beds I sometimes sleep in, I get sick much more often than I did in the U.S.  Whether it's a sinus infection,  bed bugs, or stomach flu, it's never fun.

6. What do you miss most?
I miss the luxury of always feeling safe.  Nairobi is not an especially safe place, carjackings and more petty crimes like robbery are common.  I don't drive here and we rarely go out after dark.  I always took my safety for granted in the U.S.

7. What did you do to meet people and integrate in your new home?
I've met expats in a variety of ways- by taking a language class, through online groups, through my husband's work, and through my blog.  Meeting locals is something I struggle with more.  I took a language course, so learning kiswahili has helped me communicate better with Kenyans and integrate more.

8. What custom/ habits do you find most strange about your adopted culture?
The system of driving in Nairobi has been hard to get used to.  Drivers have to be really aggressive if they want to get any where, and people tend to ignore all traffic rules.  I get nervous just sitting in the passenger seat; I can't imagine owning my own car here.  Almost every expat I know who has a car in Kenya has been in an accident.  The driving style works for Kenyans, but for those of us who are used to following the rules and driving cautiously, it's a disaster.

9. What is a myth about your adopted country?
I've heard plenty of stereotypes and myths about the African continent, but very little about Kenya specifically.  Maybe that's the biggest myth:  that "Africa" is a homogenous place.

10. Is the cost of living higher or lower than the last country you lived in and how has that made a difference in your life?
I was living in the U.S. before moving to Kenya.  If you want to live like you do in the U.S., it's very costly here.  Going on safari vacations, having reliable internet, taking taxis (which are safer than public transportation), and eating certain western foods can be really expensive.  If you're willing to live more like the locals, then you can live quite cheaply.  For my husband and I, safety is paramount, and we're willing to spend more money to live in a safer area and travel safely (i.e. taxis after dark).

11. What advice would you give other expats?
Plan ahead.  Even if you're already an expat, moving to another foreign country can affect your finances, your physical and emotional health, your career, and your relationships.  Prepare yourself for the changes by doing your research, and packing the tools you'll need to be successful.  I always bring plenty of books to keep me busy when I'm in the friend-meeting stage (and don't have a lot of social events planned).  I try to connect with people in my new country before I move, and I build time into my schedule for taking a language class when I first arrive. 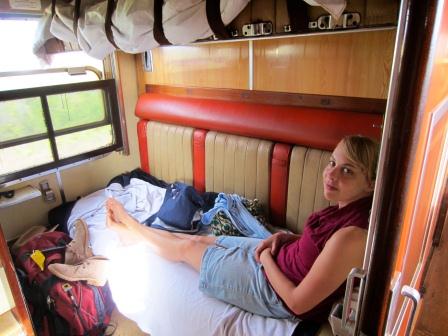 12. When and why did you start your blog?
I started my blog, One Trailing Spouse, in February 2012.  I wanted to connect with other people, especially other trailing spouses, and I wanted to tell people about what life is like when you're constantly on the move.  Also, my husband was in South Sudan for work at the time and I needed a project!