From Surrey to Minneapolis to Dubai: Circles in the Sand 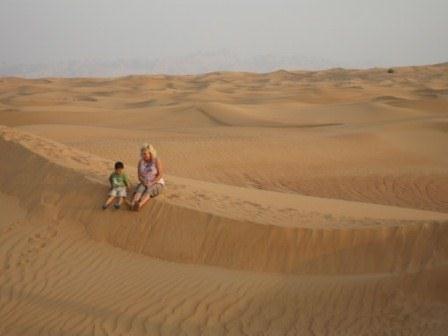 I write under the pseudonym Dubaiunveiled, because when we moved to the Middle East in 2008 I realised there are lots of misconceptions about this region of the world (“Will you have to wear a veil?” was one of the questions I was asked before moving). I’m originally from Surrey in the UK, but we relocated to the UAE from Minneapolis in the US.

1. Why did you move abroad?
My husband, a pilot, is responsible for all our moves! He’s American (I’m British), so I eloped with him to Florida five days after marrying. We spent about five years in the US, before moving to Dubai so he could fly bigger airplanes. We like to keep things interesting – and sunshine.

2. How do you make a living?
My husband works for Emirates and is lucky enough to be flying the A380 Airbus all over the world. His ambition to fly bigger airplanes came true! But he also has a lot of time at home, much more than he had in the States. I do some freelance editing work for a publishing company – and write a blog, called Circles in the Sand, when the children aren’t looking.

3. How often do you communicate with home and how?
My mother has always worked with computers and uses Facebook and Twitter! We communicate via email, Facebook updates and Tweets, so it feels like we’re in touch the whole time. Social media is invaluable for expats and really helps you keep up to date with the daily lives of your family and friends back home. I really can’t imagine penning letters, though I did spend years writing to an Australian pen pal when I was younger and loved learning about her life downunder – like embryonic, pre-internet blogging! It’s much easier to keep in touch now.

4. What's your favorite thing about being an expat in Dubai?
Along with the blue skies, we love the travel opportunities, the diversity of the nationalities in Dubai, the beaches and pools, the greenery (yes, there are landscaped parks), the friends we’ve made and the fact we can afford help at home. Also, I’d be lying if I said we didn’t enjoy Friday brunch – it’s like Sunday lunch but with a lot more excess and we indulge in it every so often, especially if kids’ entertainment is laid on too, or we’re celebrating something with friends.

We get a lot of visitors here in Dubai and they all seem to have a really good time, returning home with some rather lovely gold jewellery, several handbags, a Persian rug, a comical camel and their best tan. Ever.

5. What’s the worst thing about being an expat in Dubai?
Life in Dubai isn’t all about champagne brunches in five-star hotels, though. The sauna pick-up (aka the school run in 40Ú+ temps) is no fun and we all get rather irritable in summer, when life moves indoors due to the hot weather.

6. What do you miss most?
Family and friends, goes without saying. But also well-stocked supermarkets. Bagels, countryside and decent TV.

7. What did you do to meet people and integrate in your new home?
Meeting people was really easy because we moved into a compound where all the other residents were also new. If you have children, there’s a wide variety of activities you can do with your kids that bring you into contact with other mums. I went to a playgroup to begin with, then when my older son started school, I went back to work and met some fellow journalists. We now live in a large compound and there’s no shortage of like-minded expat friends and playmates for the kids.

8. What custom/ habits do you find most strange about your adopted culture?
At first, it was a little strange that the weekend is Friday and Saturday, so everyone goes back to school and work on a Sunday, but now that feels normal. Driving round Dubai can be nerve-wracking as you see some quite aggressive driving on a daily basis. In the fast lane, for example, you’re at risk of being ‘extreme tailgated’, whereby a car comes right up behind you and flashes its lights until you move over. I stay out of the fast lane, for that reason.

The culture is very maid-oriented, which some Westerners don’t like. I’ll admit it mostly works in our favour – having help at home means I can go out to work, and we’re able to spend more time as a family (as a friend of mine put it, having a housemaid, or ‘wife at home’, means Mum can go off and be someone else). But there are downsides. The play area is often filled with nannies rather than mums, and the nannies aren’t always able to control their tear-away charges.

Another thing that might make us sound terribly spoilt is that, in the Middle East, it’s possible to outsource every task you could conceivable think of, from the ironing to banging a nail into a wall, changing a lightbulb and assembling Ikea furniture. It’s actually very difficult not to have help in Dubai. One of my favourite Dubai bloggers, Where’s my ruby slippers? (http://wheresmyrubyslippers.wordpress.com), wrote about how at the mall that morning, a lady took her parking ticket at the exit and put it in the machine that operates the barrier. “Had she been able to shut my car window without cutting her arm off, I have no doubt she would have done that as well,” wrote Ruby Slippers. The drawback is that it becomes all too easy to just throw money at a problem – and we’re constantly having to teach our kids that life back home is very different. I really, really don’t want my children to turn into expat brats!

9. What is a myth about your adopted country?
It’s a myth that we’re all wealthy! The UAE might be tax-free, but the cost of living is high and we spent the first couple of years only just breaking even. I met a lady at a hotel swimming pool once who quipped, “You must all be very rich out here.” After listening to her tut as she pondered the amount of money she’d paid into the British government’s coffers, I replied politely, “Well, no. Have you been to a supermarket here? You get very little change after buying some bread and a fish finger.” There are also steep school fees to consider.

10. Is the cost of living higher or lower than the last country you lived in and how has that made a difference in your life?
Hiring domestic help, ie, a maid or gardener, is much cheaper than at home, but as alluded to in the previous answer, our grocery bill is always enormous. Clothes, toys, iPads, etc, all seem to be sold at inflated prices in Dubai. Rents, on the other hand, have fallen by a lot, and the days when landlords would demand a year’s worth of rent in advance thankfully seem to be coming to an end.

11. What advice would you give other expats?
Keep an open mind. There’s a settling-in period of six months or so, when it may all feel a bit overwhelming, but hang in there – life is good in the UAE! It’s also wise to not try to achieve more than one thing a day – it can feel like things work in mysterious ways, there’s a lot of paperwork to wade through, you’ll need dozens of passport photos (in which your cat and great aunt must be smiling, only joking!), the phone companies Etisalat and Du will drive you crazy and wives will need permission from their husbands to drive. But it’s all worth it. I promise.

I started my blog in April 2011, primarily to keep 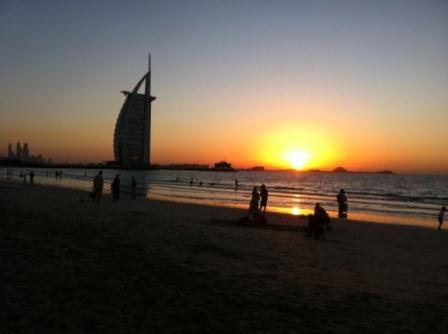 in touch with friends and family, but also because I really enjoy writing and Dubai provides such great blogging material. It’s really grown since then – I just celebrated 100,000 hits and I’m wondering whether I could sell enough advertising to buy a cup of tea!

Do stop by – I love getting comments from all around the world and do try to reply. I’ve made some lovely bloggy friends too and really enjoy the glimpses they offer into their lives on their blogs. Essentially, I’m quite nosey – and if I didn’t write down all the funny things that happen, I’d forget them and they’d be lost forever. One day, the kids will read my blog and say, “Muuuummm, why did you tell everyone that?”

Dubaiunveiled's blog, Circles in the Sand