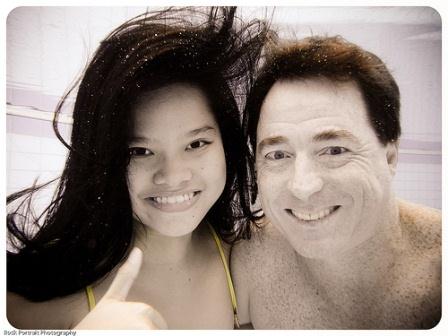 Hi, My name is Steve. I’m originally from Melbourne, Australia and I moved to Ho Chi Minh City in 2009.

1. Why did you move abroad?
After 13 years in a giant corporate, serving internal and external IT customers in various ways, I found myself increasingly dissatisfied (with life?), but not sure why. I wangled a severance package during a huge corporate restructure, which allowed me the luxury of a long overseas trip. I chose Asia because we have so many Asians in Melbourne, but because they tend to keep to themselves I knew nothing about them.

Seven countries and 53 days later I came home, having fallen in love with Vietnam and Japan, but not knowing if I would ever see those places again. I started a new job, but remained unhappy. A few weeks later I read that my favorite metal band, Judas Priest, was playing the Budokan in Tokyo. This is one of those iconic gigs that most people only ever dream of attending, but I was determined to make it happen. A rather spontaneous trip ensued, leading me back to Japan, with Vietnam added for good measure as well. It was after that trip I knew I needed to live in Vietnam. I undertook a TESOL course, hooked up with a local agency, sold my house, ended my 10-year relationship and moved. Crazy, you say? Maybe so. I am now much more satisfied with life, though.

2. How do you make a living?
I’m an ESL and ICT (Information Communication Technology) teacher at an International High School in District 10 of Saigon. I’ve been working there since I arrived in Vietnam, and also spent a couple of years in its sister Language Center before quitting that to focus on full-time career teaching.

The job itself is usually quite rewarding, as the school is dedicated to providing a modern teaching environment and methodology. It’s true that they have a long way to go to achieve the latter, but they are doing their best, and as a result they listen to and try to implement most of my suggestions. All a teacher can ask for is support in their endeavor to provide effective teaching, and my school supports me. The kids themselves can be delightful, but unfortunately most are spoiled and lazy, coming from rich families who treat them like little princes and princesses. So, the biggest challenge is to get through to them that their world is global, unlike their parents’, and they need to work hard at mastering both English and international etiquette to give themselves the best future.

I work Monday to Friday, usually from 8am to around 5pm and, very begrudgingly, Saturday mornings from 8-11. The salary is excellent, allowing me to live a very comfortable lifestyle and save effectively when I put my mind to it.

3. How often do you communicate with home and how?
I am not a regular communicator with my family and friends back in Australia, but use Skype or email to stay in touch every few months. I prefer to blog about my daily experiences, and feel that’s the best way to let people know what’s going on in my life. Like me, my family is very busy and active and doesn’t have a lot of free time to devote to staying in touch. We have recently started a private family blog, in the hope of reducing the distance between us virtually.

4. What's your favorite thing about being an expat in Ho Chi Minh City?
Probably the cost of living. It is very easy to save money because food, drink, rent and facilities are all very cheap. The food is most probably the best part of living here, and if I ever go back home that will be what I miss the most – particularly the fruit. Another thing I really like, that others often don’t, is the weather. I love heat – it makes me feel more healthy.

5. What’s the worst thing about being an expat in Ho Chi Minh City?
I am not used to so much noise and so many rude people, and there’s plenty of both here. Generally, Vietnamese have no regard for personal space, queuing or privacy, and I rate all of those very highly. The language barrier can be a problem at times, but I’m slowly picking up more rudimentary vocab, and I tend to always be with someone who can assist when communication becomes troublesome. The paperwork and administrative requirements to live and work here legally are also annoying, and can at times be quite stressful.

6. What do you miss most?
I miss some tangible things like my cars, home cinema and house, as well as being able to buy any consumable I want. I also miss easy bill payments online, common sense being applied in business, an effective and relatively honest police force and politeness.

7. What did you do to meet people and integrate in your new home?
Initially I made friends online while I was still living in Australia. This softened the shock of change until I got to know more people living here. I did so through gatherings of people with mutual interests like cricket and football, and through Twitter. To succeed in a place like Vietnam you really need local friends. Fortunately, Vietnamese are very friendly and willing to help. Unfortunately, many of the locals also have an agenda when they associate with a foreigner, so it’s important to watch out for that. Unexpectedly, most of the expats have issues, hang-ups or superiority complexes. Thanks to being burned a few times recently I tend not to trust too many people here, and as a result I keep a very small social circle.

8. What custom/ habits do you find most strange about your adopted culture?
There are so many things that seem strange and illogical to me. I guess some of the most common are these:

People say Yes when they mean No;

Locals give (incorrect) directions even when they don’t know where something is;

Queue-jumping – grrr! I often take action when this happens, pulling the offender back out of their stolen position, while glaring at them;

As much as 50% of road users ride through red lights and many locals do really stupid things on the road;

In Vietnam I need to say something three times before what I say is taken seriously and acted upon.

9. What is a myth about your adopted country?
I suppose the most common would be that people think they hate Americans and that it’s a dangerous place to live. Far from it. That war was a long time ago. In fact, I stumble across much more anti-French and anti-Chinese sentiment. I live in Saigon, and it may well be quite different in Hanoi. Another myth would be that facilities are primitive. Not the case at all. Although Vietnam is clearly still a developing nation, Saigon is quite modern, with cinemas, hospitals, restaurants, shopping, entertainment facilities and more to rival most foreign nations, if you can afford them.

10. Is the cost of living higher or lower than the last country you lived in and how has that made a difference in your life?
Cost of living is significantly lower than in Australia – perhaps 10 times lower. This is one of the main attractions of living here. Whilst I don’t get paid as well as someone working for a foreign company, I have far more disposable income in Vietnam than I did on a 6-figure salary back in Oz. The obvious impact is that I can do whatever I want without thinking about financial impact, and I can pay cash for everything. Credit cards are not commonly accepted here, but I rarely need them. I know of some teachers who are paying their mortgage back home whilst still living comfortably here.

11. What advice would you give other expats?
I would tell them to check their ego at the door on arrival. Another thing would be to listen to advice from others who have been here for a while, but at the same time, use care – don’t naively believe everything you hear as there are a lot of warped long-timers here. Guys need to be careful when getting involved in the local dating scene – and you will find it nearly impossible to avoid that scene. Stereotypes abound. No matter how much some ladies protest that they “are different”, underneath it all you’ll find most are quite the same - significant cultural clashes (I’m being nice) make honest, fulfilling relationships difficult. Do your research about what to expect, but don’t get too caught up by the negativity and misogyny polluting those who hang out in the regular expat haunts. In fact, unless you’re a bit of a boor, I would limit your time in such places. Spend more time enjoying the local culture, food and people outside the (primarily) foreign districts. As far as girls go, there are certainly some jewels amongst the pebbles, but not many. Foreign ladies should be prepared for a barren love life. Teaching jobs are easily found, but quality ones are not. You’ll need a degree and a TESOL certificate at the very least if you intend to work for a reputable school. Finally, if you are thinking of coming to Vietnam for an easy life with plenty of beer and women and not a lot of work, then stay home - you give foreigners a bad reputation. 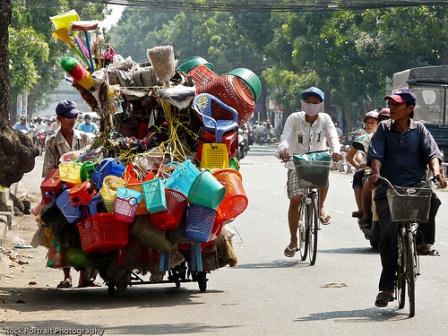 I’ve been blogging both casually and professionally for a very long time. Once I moved to Vietnam I put my professional blogs on ice and moved to a personal format designed to entertain and inform my friends and family. My blog, in combination with my Flickr collection, also serves as a personal memory repository. I like to go through my past and reminisce about all the many things I’ve seen and done. The name “Channel Steve” came from the idea that my blog contains windows into each of my interests (channels), such as music, photography, philosophy, food, travel etc. It was originally intended to be a portal to my many social network presences, but I’ve since stopped that.  I have no interest whatsoever in commercialising this blog – it’s just a place for me to express myself.