Fitting into the Expat World 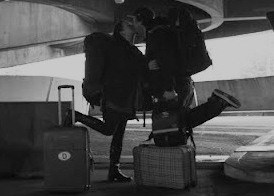 2nd time is a charm?

Reading expat blogs and interviews, it's interesting to me to hear about more tumultuous love affairs expats have with their adopted countries.

US Peace Corp employee, Krys, answered
"What’s the worst thing about being an expat in Cameroon?"

There aren’t too many expats in Cameroon, so there are a lot of stereotypes to fight.  People will assume you have money and charge you more, people think all Americans are Caucasian, so if you are of a different race, they might not believe you (until you bring up Barack Obama!), etc.  And yes, sometimes when I walk down the street, people will randomly yell “White person!” or a wannabe-Chinese “hello” at me! You just have to laugh it all away.

Traffic and pollution. Our quality of life is greatly diminished by these factors as it can take up to two hours to travel 3 KM and the lack of clean sidewalks and the bad air quality do not allow for alternate modes of transportation. When I first moved here I was pregnant and the pungent smell of the city (there’s a reason behind that nickname) was too much for me to bear. Another big frustration for me is miscommunication. Not being able to understand what the locals really think and not because a language barrier but the importance of “saving face” and a lack of honesty.

Kelly, a Canadian married to a Chinese man in Hebei, says

Despite all of China’s modernization and becoming the world’s largest economy, there are still many things here that feel as if a person has traveled back in time, especially outside of the major cities (and I live in a small city, not even a village).  Unheated and uninsulated buildings, lack of hot water, windows that don’t seal – it’s these little things that can add up to make life frustrating at times.  And yes, I’m fully aware that complaining about them makes me sound like a first world diva!

These are things I wouldn't dream of encountering in Germany. Becoming an expat is a big step, but these moves put my expansion of cultural boundaries to shame! Before I open my mouth, I could pass as a local. Rarely am I hassled for being different, especially in such an international city with different nationalities mingling on an everyday basis. When I describe my life abroad to friends and family back home it can sound quite exotic. But the longer you live away and settle into routine, expat life can lose its glamour.

That is not the case for these, and many other, expats. There is no chance of fitting in as they are singled out from the moment they step out their door. For some people, that's part of the attraction of expat life. A recent episode of NPR's This American Life, a weekly hour-long radio program hosted by Ira Glass, explored the world of "Americans in China".

"Months ago, in preparing for this show, we started reaching out to Americans living in China and asking for their stories. A shocking amount of the expats came back with stories about different times they were on Chinese television. So many people sent us their China TV stories that we began to wonder, "have ALL of you guys been on TV?! Is this the consummate expat experience in China?" Several expats talk to Ira about why the Chinese love foreigners on their TV shows. And Evan Osnos, a staff writer for The New Yorker who writes about China, says it's hard for Americans living in China to figure out what to tell friends and family back home. "

I was fascinated by their accounts. I was even a bit envious. Their stories described how they were treated as part celebrity, part performing pet. How fun...and bizarre. But I think the grind of being different would send me home before the tediousness of routine. I really do like being able to fit in. Maybe that is why we were able to return to Berlin rather than trying somewhere else. It isn't just that the city is awesome (it is), it's also that this is a place that can feel like home, and increasingly does with each passing day. Plenty of people adjust to life that barely resembles the life they've left behind and love it. For me, I think this means that even though I've geographically moved 5,040.79 miles away, my heart remains much closer.

Have you ever been jealous of other expat's experiences? How did you choose where to live?