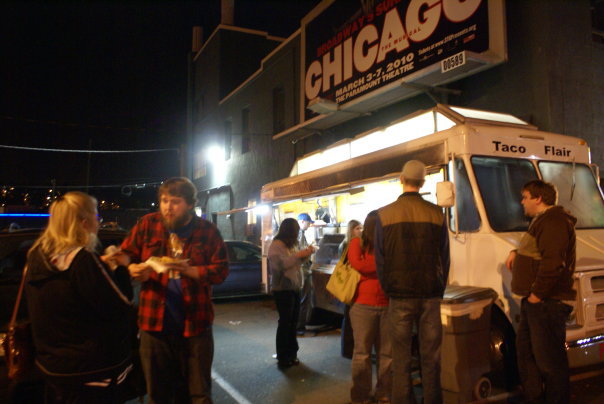 A recent news story from the New York Times caught my attention.

"In France, there is still a widespread belief that the daily diet in the United States consists of grossly large servings of fast food. But in Paris, American food is suddenly being seen as more than just restauration rapide. Among young Parisians, there is currently no greater praise for cuisine than “très Brooklyn,” a term that signifies a particularly cool combination of informality, creativity and quality."

This isn't the first time an expat has heard of the terrible reputation of American food abroad. But the term “très Brooklyn” and what it signifies is new to me. Wait - is American food cool?

Maybe not quite yet, but some innovative serving methods are making a difference. A taco truck has crossed the ocean and made it's way to Paris. Cantine California is the latest in a recent American culinary invasion along with classics like cheesecake, bagels and bloody Marys. The truck is operated by Kristin Frederick, a California expat and the move wasn't easy. "People said: 'The French will never eat on the street. The French will never eat with their hands. They will never pay good money for food from a truck'" says Frederick.

Despite these fears, the truck has thrived. I'm not surprised. Oh, taco trucks. How I miss thee. As I wrote about previously, Mexican food tops the list for things Americans miss most. The look, the smell, the taste of tacos straight off a truck is as familiar as my childhood home. And now Parisians are experiencing the pleasure for themself. 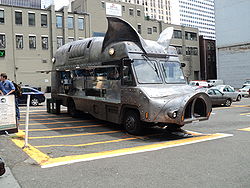 The food truck movement has been huge stateside. No longer offering sloppy scraps, the "national street food movement" provides fine dining on the fly. Seattle, my hometown, offers such delicacies as:

There is even a site, seattlefoodtruck.com, dedicated to the trucks and a subsection of taco trucks. On the national scale, Rachel Ray (American celebrity chef) literally jumped on the bandwagon- er, food truck - to promote her new cookbook. There is even an American TV show that pits food trucks against each other called The Great Food truck Race. It's a bona fide trend.

Not that America is leading in all food trends. A1 Concepts has created an innovative pizza vending machine that prepares pies from scratch in 2.5 minutes that they plan to release in the USA in the comign months. Already a success in Europe, the machines are called "Let's Pizza". They are set to be delivered to malls, airports, supermarkets, universities, gas stations, bus stations, and even hospitals. At just $5.95 for a 10.5-inch pizza, I'm interested in buying. I expect many Americans will be ready for this international bite as well.


So taco truck venders - anyone thinking of coming to Berlin?....please?