From Toronto to Berlin: Cheryl Howard 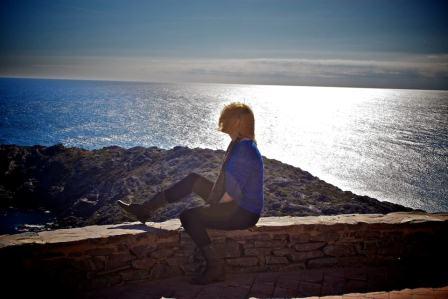 1. Why did you move abroad?
I took a 9 month sabbatical from work and spent my time being lazy and travelling. After visiting Europe twice, I fell in love with the continent (not a guy) and knew I wanted to move abroad.

Within months of my second visit, I sold almost everything I owned, quit my job and left behind my family and friends in Toronto, Canada. If you want to know the entire story about why I moved to Berlin, you can read all about it on my blog.

My love for Berlin and Europe has blossomed in the year since I've been here. I'm so fully committed to my new “relationship” that I recently applied for a long term work permit to stay  for another 2 whole years.

2. How do you make a living?
I was never really happy working in a corporate office environment. Upon moving to Berlin, I was finally able to realize my dream of working for myself. I'm now an independent freelancer working as a project manager and travel writer.

My professional background is that of a project manager and I currently consult for a local company helping out with some of their IT projects.

As far as my writing is concerned, I'm the one woman show behind cherylhoward.com, a “European travel and expat lifestyle publication”. I also contribute to a blog for a 5 star hotel in West Berlin which will be launched later this month.

And weirdly enough, sometimes I perform “translation” services. People have actually paid me to take German text and write it in English for their web sites. Given that my German language  skills are meager at best, this is hilarious! I basically translate Google Translate's suggested English into English that still may or may not still make sense.

3. How often do you communicate with home and how?
I don't really have a set schedule. I most frequently communicate through WhatsApp, Skype and email. As I'm a heavy social media user, there's also Facebook and Twitter.

Really special friends of mine get random postcards and packages through snail mail. Some are soon to receive a candy delivery of German Haribo.

4. What's your favourite thing about being an expat in Berlin?
There are plenty of reasons to love living in Berlin and the thing I love the most about the city is it's free spirit. That being said, these are some of very my favourite (albeit silly) things ...

Being able to drink anywhere be it at the movies, in the park or even on public transit.

Flea markets like the one at Mauer Park where you can sit back in the grass and watch a  karaoke event that attracts hundreds each week.

Attending 90's dance parties where people like Haddaway perform. Yes, this happened and I was there!

Being able to sit with friends for hours on end sipping wine at a cozy local bar. I've found myself leaving when the sun has come up more than once.

5. What's the worst thing about being an expat in Berlin?
Dog poop on the streets. I'm not sure why but a lot of people don't clean up after their canine friends here. It's gross.

Being called American. It seems that Europeans see anyone from North and South America as American. While there's nothing wrong with being American, I see myself as different and spend a lot of time clarifying the fact that I'm Canadian or in the very least should be called North American.

The moment I say I'm from Canada, I get asked in a rather excited voice “Do you know Robyn     Sparkles?” She is none other than the Canadian character on How I Met Your Mother. Germans really love this show and are a bit sad when I say that I've never watched an episode.

6. What do you miss the most?
Friends and family are a given. There are some unexpected things that I miss ...

Myself (along with a lot of other expats) yearn for rectangular shaped pillows! Germans sleep with giant sized square shaped pillows. I always end up folding mine in half so it bears a slight resemblance to the pillows of my homeland but somehow, it's just not the same. Will someone send me new pillows, please?

Oh and stick deodorant. You can only buy spray or liquid roll-on deodorant! I have to flap my arms up and down like a chicken waiting for my underarms to dry each morning and it takes forever.

My clothes dryer. Most people don't have a dryer in Europe and you have to hang everything to dry. Nothing is ever soft, fluffy and fresh smelling. My towels dry hard and prickly so much so they are like loofah sponges.

7. What did you do to meet people and integrate into your new home?
The first few months in Berlin were rather lonely and it wasn't easy. Some things that worked for me ...

Social media, especially Twitter. I started following other expats and locals who live in Berlin, started chatting them up and eventually met many of them in person. Many are now close friends.

I made a local wine bar my second home and friended someone who worked there who introduced me to other people.

8. What customs/habits do you find the most strange about your adopted culture?
The Germans devotion to sausage. Anytime, anywhere and you'll see someone eating sausage. I once saw an old woman on the uBahn eating a sausage at 10 AM. Predictably, it was paired with a bottle of Berliner Pilsner.

Dubbing English movies over in German. Imagine cult classics like the God Father or Star Wars    dubbed over in German! Many people admit to feeling surprised when they hear the actors' real voice.

9. What is a myth about your adopted country?
Some people think that German people aren't very friendly and see them as distant and cold. They're actually very warm and kind people and I count several Germans as good friends. It just takes a while to get to know them and once you do, you'll find yourself with deep long lasting    friendships.

11. What advice would you give other expats?
If you're thinking about moving abroad and it's something you really want to do, just make it happen. Don't let your fears, doubts and other excuses you may create for yourself hold you     back. Moving to Berlin was the best thing I ever did.

My blog cherylhoward.com has existed in some shape or form for several years now but only really became a travel blog in early 2010. After moving to Berlin, I narrowed the focus to European travel and expat living.

I started my blog to share my travel and expat living experiences with others with hopes to inspire them to travel more or even move abroad.