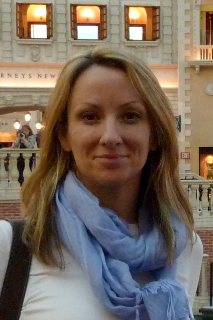 Rachel Yates is an expat trailing spouse from Wales, who has spent the last 10 years turning relocation disasters into a worldwide traveling circus. She is the CEO and chief janitor at Defining Moves, where she creates resources for relocating individuals and families. Currently living in San Francisco, she has spent the last ten years routing through London, Nairobi, and Los Angeles, complete with 2 kids, 2 dogs and 3 cats. She has only once been upgraded on a flight.

1. Why did you move abroad?
I was duped. I was told I was going for a lovely year's sojourn to Kenya, where I could live a life of leisure, sip sundowners and wear freshly pressed linen every day. I put my job on hold for a year, packed up the house, kids and dogs, and followed my spouse to the Norfolk Hotel, where he had been languishing while I did all the grunt work. Fast forward one week: the hotel was a fond and distant memory and instead I was in the cargo section of Jomo Kenyatta Airport bribing my dog's way to freedom, having singlehandedly delivered the kids to school, navigated Nairobi's horrific traffic system without the aid of the map, and was only just beginning to realize that I had been had..

2. How do you make a living?
Bwahahahaaa! Thanks to the torturous security systems attached to our online banking, I am the only one who has access to any of the household income, so whenever I am having a particularly bad day, I siphon it off the joint account, and list it under education..

Oh, you meant me? Ah, that's tricky. I have yet to work out how to turn a blog into something that will provide me with an income, but I’m having huge fun convincing the Other Half that one day, I will be the primary breadwinner and we can move to a beachfront property in Costa Rica on the proceeds.

3. How often do you communicate with home and how?
I speak to someone from a previous home pretty much every day, but they might be in 3 different places - all former homes. When we started out, it was via email and text message, but the discovery of Skype about 5 years ago created a monster..

4. What's your favorite thing about being an expat in California?
The weather. I love that San Francisco has seasons, but you can pretty much guarantee a warm summer and a ‘curl up indoors with a book” winter. I like change, which is probably why we continue to be expats.

5. What’s the worst thing about being an expat in California?
Lack of immediate access to Cadbury’s Milk Chocolate Buttons (Giant size). I make all my visitors haul over suitcases full of them in exchange for room and board.

6. What do you miss most?
See above... that and the wry humor of the Welsh - we have a way of making the worst moments seem really, really funny. Which, when you have a rugby team that oscillates wildly between triumph and disaster, is pretty useful.

7. What did you do to meet people and integrate in your new home?
Took the dogs for walks, accepted every invitation that came my way, and signed up for classes that interested me. The best advice I ever had about making a new network of friends was that ‘it’s a numbers game’, - you have to get out and meet lots of people to find the ones who will become lifelong friends. When you stop expecting everyone to be your new best friend and think of it as a process, you are a lot less anxious and much more willing to get out there.

8. What custom/ habits do you find most strange about your adopted culture?
That people are more willing to tell you about their successes and achievements. In Britain, modesty is considered a virtue and we turn self-effacement into an art form. It took me a long time to realize that people in Los Angeles were being serious when they reeled off their acting resume, and were not inviting smart-aleck comments in return. I made a memorable first impression..

9. What is a myth about your adopted country?
That everyone has perfect teeth. But, to be fair, most do..

10. Is the cost of living higher or lower than the last country you lived in and how has that made a difference in your life?
This one’s tricky. Goods and services tend to be cheaper, but expectations are different - people have much larger homes, so you tend to buy more to fill them. And people eat out much more and have far larger vehicles than we would be able to run in Britain. Running just one car in LA meant being labelled as ‘poor’ which was hilarious bearing in mind we’d just arrived from Kenya, where we were considered exceptionally wealthy. Navigating the differing socio-economic expectations in the various places you live is something rarely discussed in cultural orientation training.

11. What advice would you give other expats?
Plan carefully, and don’t assume that you are just going for a two year assignment. I have lost count of the number of expats who signed up for the short haul and are still expats ten years later. Don’t assume that because you have a relocation package, that the person administering it knows what you need or want, and that everything will magically appear.  It doesn’t.

For the reasons mentioned above. I was part of a corporate relocation program, but there were so many things that were never discussed because we were going for the short term, and because they were relevant to the family and not the organization. I wanted create resources that help people become more informed, know what they needed to consider before, during and after relocation, and point them in the right direction for finding help, regardless of whether they were moving independently or as part of a corporate move.