From Canada to China: Tales from Hebei 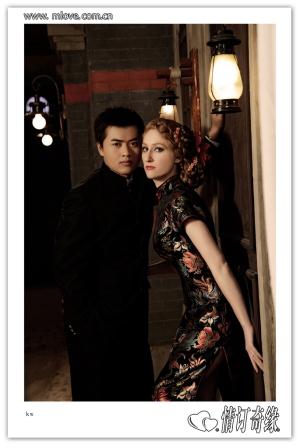 My name is Kelly Sandor-Yang.  I’m originally from rural Saskatchewan, Canada, but now I live in a small city in Hebei, China (yes, a few million people is “small” by Chinese standards!).

1. Why did you move abroad?
The short answer is that I was dissatisfied with my job and unsure of what I wanted to do (find a new one, change careers, go back to school).  I basically chose to run away from it all for a year to try to figure it all out.  Then, just to show that life really is what happens when you’re making other plans, during that one year I ended up falling in love with a Chinese man and deciding to stay.  We are now married and building our life together here.

2. How do you make a living?
I teach oral English here in China, as many foreigners do.  I was a teacher in Canada, and love interacting with the students and helping them learn.  I first came to China in 2004-2005 to teach for a year after I completed my university studies, since I wanted to travel a little before finding a job in Canada.  Because of this, when I decided to quit my job in late 2008, I had connections that allowed me to return here to teach again, and I have been here ever since.

3. How often do you communicate with home and how?
We email and chat online (using Skype or Facebook) when we can, given the time difference, and my family will occasionally phone me to hear my voice.  My father has also just gotten an iPhone, so we’ve been connecting via iMessage and Facetime.  Technology and the internet make things much easier than it would have been many years ago, and I’m thankful for that, even if it is a pain struggling through slow Chinese internet and connecting to a VPN to access blocked sites.

4. What's your favorite thing about being an expat in Hebei?
Will I get in trouble if I don’t say my husband?!  Probably.

He is certainly at the top of the list, but I also really love the presence of history everywhere.  In my blog, I make fun of constantly hearing the phrase, “China has a very long history…” as an explanation for habits I don’t understand, but I really do appreciate the history of this culture, coming from such a relatively young country as Canada.  It doesn’t matter where you travel, from a big city, to a small village, to a farmer’s field, there is history everywhere!  In nooks and crannies all over Hebei, and China as a whole, you’ll discover “the birthplace of” something, or a temple dating back 600 years, or a tea shop frequented by some famous historical figure back in the day.  There are so many stories out there just waiting to be told!

5. What’s the worst thing about being an expat in Hebei?
Despite all of China’s modernization and becoming the world’s largest economy, there are still many things here that feel as if a person has traveled back in time, especially outside of the major cities (and I live in a small city, not even a village).  Unheated and uninsulated buildings, lack of hot water, windows that don’t seal – it’s these little things that can add up to make life frustrating at times.  And yes, I’m fully aware that complaining about them makes me sound like a first world diva!

6. What do you miss most?
I got in trouble after a previous interview for not mentioning family first, so I’ll go with family!

But after that, most of the things I miss are foods that I can’t get or replicate here, though the list is dwindling now that I’ve got my hands on an oven and discovered a couple of import food shops online.  Then there are the strange, but simple things, like browsing in a bookstore where I can read the book jackets, seeing a thunderstorm roll in from the horizon at my family’s farm, or the first time you go for a drive on a warm spring evening with the windows rolled down.

7. What did you do to meet people and integrate in your new home?
I am very lucky in that I work with not only some other foreigners, but also bilingual Chinese teachers, so I was able to make some connections with coworkers right away.  The hard truth is that although everyone here is very friendly on a basic level, truly integrating and making local friends is very difficult, mostly because of the language barrier and the fact that I will always be visibly “foreign”.  I’ve made some friends through work, and through my husband, but am not sure that I will ever be truly accepted as an equal.

8. What custom/ habits do you find most strange about your adopted culture?
In a way, this is what my blog, Tales from Hebei, is about – those strange things I encounter or have to learn about here.  China has a very long history (I’m reminded of this constantly) and the customs and habits of most people here are so strongly rooted in that history that they are loathe to change.  Even stranger than the customs and habits themselves sometimes are the lines of reasoning and explanations for them!

I’m more convinced every day that the longer I stay here, the less I will understand about China.  For example, beliefs about health and wellness are very baffling to me – despite widespread antibiotic use (abuse?) here, even many doctors don’t seem to know about or believe in viruses and bacteria being the causes of illness!

9. What is a myth about your adopted country?
So many myths persist about China, but one of the biggest might be that all Chinese people look the same.  While there is certainly less visible variety than in a multi-ethnic country like Canada, I am going to go on record to state that I have absolutely no problem telling people apart.  Ironically, some Chinese are of the belief that all foreigners look the same too, so it’s a two-way street!

10. Is the cost of living higher or lower than the last country you lived in and how has that made a difference in your life?
For the country of China itself, I would say it varies depending on where a person lives (the cost of living in Beijing is much higher than the small city I live in).  For most things, my cost of living is lower than it was in Canada.  My salary to expenses ratio is much better here, which means that I can live a much more comfortable life here than I did in Canada.  I don’t live frivolously, but I also don’t have to budget my life down to the last penny to make it through each month.

11. What advice would you give other expats?
I’m not entirely sure I’m qualified to be giving advice at all, but I would say that you must have as much patience and humour as possible, especially in a place like China, or you won’t last (I’ve got the humour, to a degree, but I have a lot of work still to do on the patience!).  Remember that your chances of changing an entire culture’s behaviour are pretty slim, since they have their own reasons for behaving that way.  Everyone gets frustrated from time to time, but learning to let things go and laugh about them can help to keep you sane. 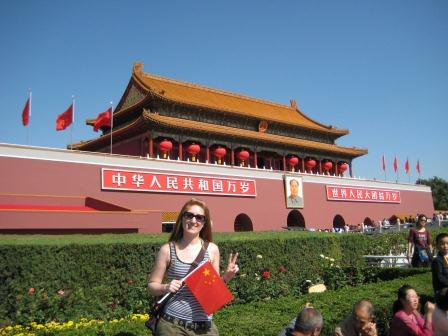 12. When and why did you start your blog?
I started blogging in January 2010 as a way to share some funny stories from my life with friends and family without having to retype the same story over and over!  It still amazes me that people who don’t know me at all actually enjoy reading it.