It's funny that no matter how far you go, some things never leave you. The taste of your first oreo. Your mom fixing a bowl of your favorite cereal before school. Lazy football Sundays with overflowing bowls of potato chips. American classics. So what is the rest of the world doing to our favorite treats?

"Russians prefer their Lay's potato chips dusted in caviar and crab flavors. The Chinese like their Oreos stuffed with mango and orange cream. And in Spain, Kellogg's All-Bran cereal is served floating in hot coffee instead of cold milk."

What are these monstrosities? (Ok - the mango oreo sounds delicious.) It makes business sense for International brands to adapt to different markets, but bizarre to see our food exported and mutated. What does that say about us - American expats in the flesh? How have we changed and adapted? Or have we just mutated? 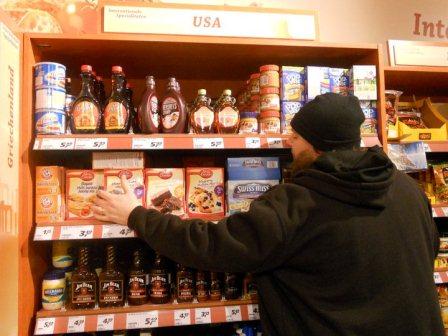 I guess I shouldn't be surprised. I've seen these misfits through German eyes. In Berlin, "American Week" pops up every year. Things I hadn't realized I was missing like maple syrup, pop tarts, and marshmellows sit - glorious - upon a shelf. It's quite a reflection on what Germans (or at least grocery suppliers) think we like. I don't know if I am ashamed or proud that almost everything on that shelf is mostly artificial.

However, some things don't need a shopping event to remind me of how much I miss them. Many stereotypes about the Germans are untrue.

But sadly we've come to find that one whispered about myth is a fact. Germans can't handle spice. Scrumptious, savory, succulent foods abound - but not spicy. This is a fair trade for German cuisine...except it also means it is close to impossible to find adequate Mexican food.

A common complaint among many American expats (check out how frequently "Mexican food" pops up in answer to "What do you miss?" in Expat Interviews), the loss of taquerias in our life has been cause for frequent lament and inventive cooking. Could feta work for queso fresco? Any idea if these Turkish peppers are spicy? Can we substitute Indian chili powder? Through Frankensteinian mash-ups we've managed to make it work (along with care packages of tortillas and refried beans from home).

It may seem strange to hear Mexican food claimed as an American expat's own, but I can hardly remember a week where some form of TexMex like burritos, enchiladas, or nachos didn't make it onto our dinner menu. A beautiful example of integration, I think Americans accept another culture's food before we accept their people. America - One big melting pot...

10 foods Americans Miss Most while Abroad,   but there were some other surprises.

Again, I'm not sure if I should be embaressed of this list. Ketchup packets? And our verison of pizza is a far cry from the Italian culture we stole it from. What is it about these foods that say home? Thinking of this from another perspective, what do German expats miss when abroad? The spicy Bautz'ner mustard? Curry Ketchup? Or just a giant Schweinshaxe (pork knuckle)?

What do you miss most?

If you have recipes, international grocerery shippers, or food tips to share - leave them in the comment section.