May Day in Berlin and Beyond 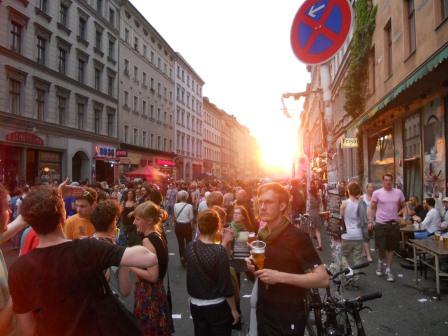 May Day didn't have any meaning for me in the States. If pressed, the only thing that would come to mind is the May pole with happy villagers dancing around it. Ribbons and flowers and all that nonsense.

That all changed when I came to Berlin. Like many cities (especially those with a left leaning populace) May Day can erupt in major political demonstrations and riots. Also known as "Day of Labour" (Tag der Arbeit), it is an national holiday in Germany. It had become a rioter's paradise with unruly crowds tipping over police cars, setting anything that doesn't move on fire, and generating a hailstorm of thrown bottles. "Protesting" meant destruction without all that messy political dialogue.

Obviously, these actions proved unpopular with the city and residents. Since 2005 Berlin has worked to transform these protests into parties. Now called "MyFest", the festival is not only a clever pun, but a representation of some of the best things in Berlin. Everyone dresses in their best hippie / hipster gear, listens to music ranging from hip-hop to Turkish folk to heavy metal, and dance, drink, and be merry. 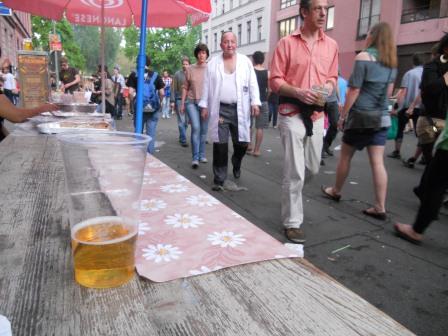 It is one of those events that draws everyone in the city. Friends meet and laugh and then drift back apart as you make your way through the crowds. A cosmic feeling of goodwill pervades as you munch on some falafel, sit Indian-style in the park, and drink copious amounts of beer. Even the cops - out in force - can be caught smiling.

Sadly, my hometown Seattle appears to have caught onto the holiday but is adopting more of the destruction than the celebration. The Seattle Times reports:

"1:10 p.m. | Those bent on doing damage, who call themselves Black Bloc, broke out the front windows of Niketown and several windows of American Apparel next door. Graffiti was put on Fidelity Investments at the corner of Sixth Avenue and Pike Street. "

What!? Seattle - that doesn't sound like you. I am proud of our beautiful city with it's intellectual, artsy community. We strive to be different, not sheep mindessly attacking the city. This is an embarrassment. Like the WTO protests of 1999, we seemed to have taken a serious issue and covered it up with petty violence.

With the news of my hometown's poor performance being broadcast this morning, I took a look at what was happening in other places. Again, the Seattle Times reports on May Day moods. A few of my favorites:

Tens of thousands of Spanish protesters joined demonstrations, weary after two years of deep spending cuts and tax hikes, sky-high unemployment and no end in sight to austerity. Prime Minister Mariano Rajoy is trying desperately to cut a bloated deficit, restore investor confidence and fend off fears that Spain will need an international bailout. "I am here because there is no future for the young people of this country," said Adriana Jaime, a 25-year-old marcher."

In France, tens of thousands of workers, leftists and union members held boisterous rallies ahead of presidential elections Sunday that a Socialist is expected to win for the first time since 1988. Many voters fear incumbent President Nicolas Sarkozy will erode France's welfare and see him as too friendly with the wealthy. "Sarkozy has allowed himself for too long to manhandle the lower classes," said 24-year-old Dante Leonardi. "Today we must show ... that we want him to leave."

Around 100,000 people - including President Dmitry Medvedev and President-elect Vladimir Putin - marched in Moscow to support the government. The two leaders happily chatted with participants and many banners criticized Russia's opposition movement. One read "Spring has come, the swamp has dried up," referring to Bolotnaya (Swampy) Square, the site of some of the largest opposition demonstrations."

Deep gloom, eh Spain? And how bizarre that Russia takes a pro-government stance. As with so many things, Berlin is the place to be...at least according to me. And that's really all that matters. Your expat life only works if it works for you. This is my third Erster Mai and looking at past pictures and comparing this year's events I see how much I've learned. It reminds me that I am part of this scene, and Berlin has become part of me. If I returned to the States tomorrow, I would be looking forward to next year's May Day.

Did you celebrate May Day where you expat? What kind of celebrations are common in your area? I love comments!