We are NOT the Champions

The Olympics rapidly approach and while I expect my home country to be a powerful competitor (USA! USA! USA!), there is one popular event where we won't even compete. The United States men's national soccer team (Futball, Fussball, etc. for all you non-Americans) did not qualify for the 2012 Olympic Games.

Full time: USA 3, El Salvador 3. Americans are out in the group stage. Salvadoran players with tears of joy — one of the great moments in the country’s soccer history. ES wins the group, Canada finishes second, USA is third."

After promises of a young American team ready to play, we're out before we even began.

The Games - as usual - has already stumbled on the way to the podium, but I must admit I am disappointed not to see the Americans compete in this most international of sports. American's enthusiasm for soccer is still tempered by our fanatical support of the "American Sports" of football (the kind you play with our hands), baseball, and basketball, but soccer viewership is on the rise. Due to increased television coverage, growing Latin American population and integration, and recent team expansions - I can honestly say I'm a fan. My hometown is even the proud new home of the Seattle Sounders. Last year, in our third season of play, the club hosted the third-largest crowd ever for a single MLS match - 64,140 people!

As proud as I am of the Seattle team, it is hard to cultivate the deep roots and ingrained traditions teams have in Germany. This kind of fandom has not reached American soccer. Like so many things in Berlin, there are two major Fußball teams.

Hertha BSC - A founding member of the German 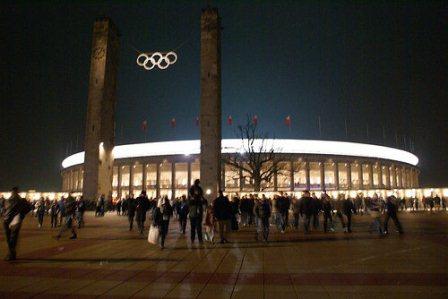 Football Association in Leipzig in 1900, the club is quintessentially West Berlin. They play in the legendary Olympiastadion which was built for the 1936 Summer Olympics. The team has struggled, but is currently in the Bundesliga, Germany's top professional league.

FC Union - Union was one of Berlin's premier clubs in the interwar period between World War I & II. Once nicknamed "Schlosserjungs" (metalworker or locksmith-boys), the popular cheer of Eisern Union! (Iron Union) still echoes through the stadium as the team takes the field. The club currently plays in the 2nd Fußball Bundesliga.

Last year the two were in the same league for the first time ever. I went to the match-up which resulted in fires in the Stadium, a ban on alcohol, and a surprising Union win. It was epic.

What I find with these teams is that it's more than just sports, these are identities. You draw an opinion of a person when they claim allegiance to one team over the other. I feel lucky to be an ausländer (foreigner) so I can enjoy both team's dynamic and totally different environments.

Major US players often choose to play abroad for these kinds of fans. Fanatical, devoted, a little bit insane - there is no doubt of their loyalty and enthusiasm. American pros have also made their mark on the field. John Harkes and Kasey Keller in England, Eric Wynalda in Germany and Earnie Stewart in the Netherlands have all paved the way for today's expat players. Do you know who has scored the most Premier League goals in 2012? An American - Clint Dempsey. With five games remaining in the season, he has scored an impressive 16 goals in the league and 22 in all competitions. That's some golden footwork. With that thought, maybe there is hope for Americans and soccer yet.