Following the path to the 2012 Summer Olympic Games in London, this is the second article in the series covering the Games. The first, "London's Preparations", covered the developments in the city. As the event creeps ever closer, more problems appear and locals and expats in the city examine if it's all worth it.

Issues with the Games

Problems are common for an huge, international event and the Games have never been immune to trouble.

One of the most frustrating issues with the troubled path to the London Olympics is the obsessive secrecy of the organizers. Local politicians have been largely kept out of the planning and a breakdown of Olympics ticket pricing will be unavailable until the Games are over. It appears that a number of the cheaper tickets available to the public (as opposed to those set aside for the media, public officials, and athletes's families) only granted access to events like low-stakes soccer match-ups and Paralympic competitions. No one will know for certain until after the Games.

Developments like new stadiums and improvements to the city's infrastructure are understandably expensive. The predicted cost of the games when London won the bid in 2005 was £2.37 billion. The Olympics public sector funding package, which covers the building of the venues, security and policing, was upped to around £9.3 billion in 2007 and it now looks as if these estimates were still too conservative. Sky News researched the expenses of the Games and discovered that the true expense could be over £12 billion, an overage of £2.7 billion!

The Public Accounts Committee (PAC), and the public, have raised concerns about the management of those funds. The actual cost to the taxpayer of the Games will be in excess of £11 billion once the £766m cost of buying back the Olympic Park and legacy costs of £826m are factored in. Possibly most worrying are the unexplained increases like the original security budget of £282 million increased to £553 million. How many more surprises are to come?

Even people who are leaving for the events themselves are struggling with the current disruption in the transportation system. It is predicted that tube passengers may face delays of more than 30 minutes at peak times in stations like Canary Wharf, Bond Street and Bank (and commuters are advised to plan up to 3 hours more for their journey in the morning). About 30 miles of the 109-mile Olympic route network will include "games lanes" reserved exclusively for Olympic transport.
London Transport Commissioner Peter Hendy said, "On the busiest days, we expect around an additional three million journeys on the capital's transport networks at Games-time."
Locog chair Sebastian Coe explained, "The scale of the Games is unprecedented - across both Games there will be 14,000 athletes, 7,000 technical officials, more than 20,000 media and 11 million spectators... Success depends on all of us doing our bit to keep London and the UK moving."

Efforts have been made to ease the congestion. The site, www.getaheadofthegames.com, identifies travel hotspots, allowing travelers to plan journeys in advance. Passengers can select their intended travel dates on an interactive map and find predictions on the traffic at specific Tube stations. The predictions are based on the number of passengers who typically use public transport and the road network during the summer, taking into consideration the average increase the Olympic Games brings. A guide to transport options is provided by Get Ahead of the Games. In addition, hours are increased for the Tube and DLR services which will be running on Sundays with increased hours in the evenings. 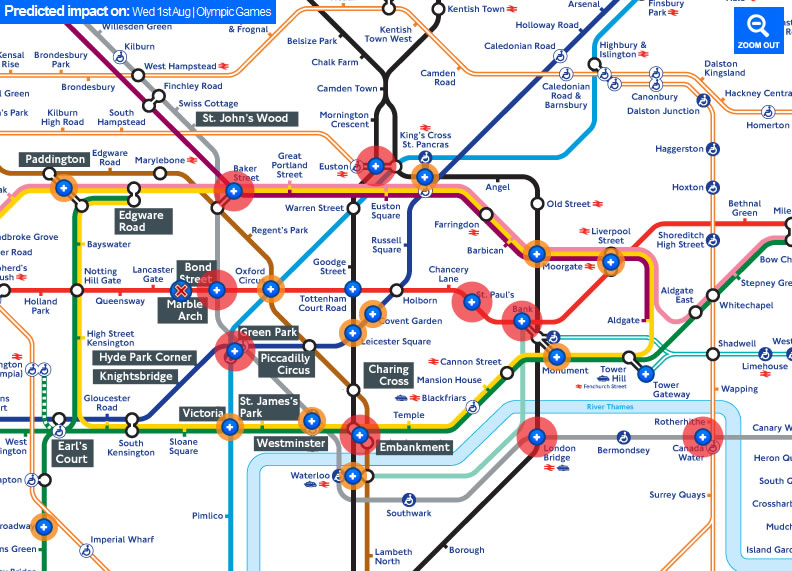 Need to know more about traveling to London, expat issues in the UK, or need a guide to the city? The expat guide to London is what you need!

Posts about the Games from Expats in London