From Ireland to Britain to Ontario: Expatlog 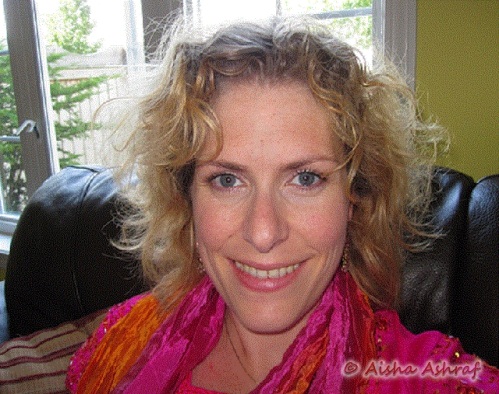 Hi, I’m Aisha Ashraf. I’m a freelance writer and I blog as Expatlogue, an accidental expat in Canada. Generally, introducing myself involves some explaining because my name doesn’t match my skin colour. I am originally from Ireland but spent most of my life in Britain where I was educated by Catholic nuns, before converting to Islam in my twenties. I realize this is not a great advertisement for the nuns, but I did appreciate the education they gave me, along with a lifelong love of plainchant!

I married into a Pakistani family, learnt Urdu, how to cook delicious Punjabi food and make roti. In the summer of 2010, we moved to Ontario, Canada.

1. Why did you move abroad?
My husband and I had often spoken about moving abroad but obviously it makes more sense to wait until you’re saddled with kids and mortgages before taking a leap like that! With the British economy in the doldrums, it seemed a good time to put some feelers out. He works for a global company and so was able to get a transfer to Canada. He’d worked abroad before, while I stayed home with the kids, but family life isn’t the same when one of you is missing so this time we all came along!

2. How do you make a living?
I’ve worked in a variety of jobs; in administration, as a trained florist and as a nursery school teacher. I stayed at home to raise my children and have since reignited an old flame for writing. I write various articles and columns for Expat Resource websites and am part of the team on the world’s first, totally altruistic and ethical blog showcase network, LoveAllBlogs. I am also working on an autobiographical project covering experience in the fields of mental health, cultural and religious transition.

3. How often do you communicate with home and how?
Social media and Skype make it easy to stay in contact with family and friends back home. Sometimes it feels like we’re in contact more since we moved 3500 miles away!

4. What's your favorite thing about being an expat in Ontario?
Ontario is Canada’s most populous province and its economic hub. Canada is built on immigration so many people we meet here are from somewhere else. In the early days this went a long way to making us feel less like outsiders in our new home. As a multi-cultural family, racial and cultural acceptance is very important to us and so far we have experienced none of the prejudice here that we encountered in Britain.

The best thing about our new home is its proximity to Lake Ontario. During the summer we spend whole days at the beach, swimming, snacking on watermelon and skipping stones!

5. What’s the worst thing about being an expat in Ontario?
From a personal perspective, I have to say the roads. Driving in Canada is very different from driving in the UK and not just because you’re on the other side of the road. Driving etiquette is non-existent different here. People rarely stop to let you join a stream of traffic, or to maneuver in or out of a parking space. The roads are multi-lane and wide and the signage is very poor. Bad design leads to fatal accidents on an almost daily basis. There would be an outcry if this were the case in London. Cyclists are seen as an annoyance by many drivers who pass far too close and pedestrians have to keep their wits about them too.

6. What do you miss most?
Decent chocolate, Twinnings Assam tea, Frank Coopers Marmalade, Wagamama’s, dilutable fruit squash, sausages. Hmmmmm, funny – it’s all food and drink! Small things were what caused the most distress in the first few months. Missing the familiar smell of our washing powder from home, all the unfamiliar brands in the shops, the awkward fixed rear-wheel trolleys in the supermarket and adjusting from miles to kilometres; these were just a few of the things that used to twist the knife of homesickness.

7. What did you do to meet people and integrate in your new home? 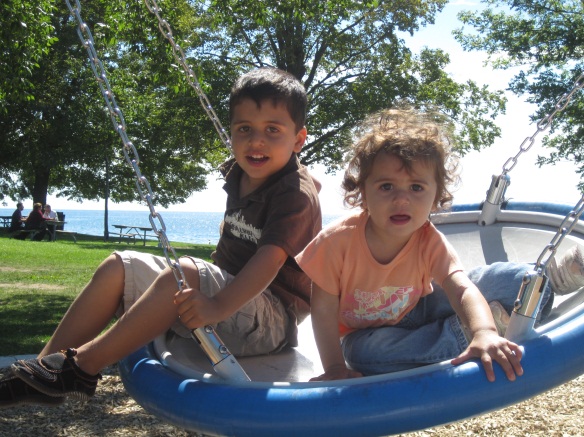 Three small children make meeting people easy. They demand to be taken to parks, beaches and splash- pads then wander over and harass perfect strangers, so you usually end up talking to someone. That said, people in Canada are very open and friendly. It’s still common here to greet someone you pass on the street. When people found out we were new to the country they gave us their cell-phone number and told us to call if we ever needed anything.

You get talking to the familiar faces in the schoolyard; we invited people round for dinner and have been over to other people’s homes. I arranged play-dates for the kids and logged on to our local internet community forum which keeps me up to date with what’s happening in our neighborhood. We’ve gone along to local fun-days and celebrations and gone out in the evening with friends. My husband took part in a sponsored bike ride for the Heart & Stroke Foundation. Generally, the more you put in, the more you get out – but you do have to take the first step of putting yourself “out there”.

8. What custom/ habits do you find most strange about your adopted culture?
I do have to suppress a giggle when I see people out and about with their large, insulated portable coffee cups! Many Canadians reliance on coffee is such that they absolutely cannot wait until after they’ve run their errand, preferring instead to take it with them. You see people out driving, walking the dog, and picking up the kids while clutching their caffeine injection – whatever gets you through the day! You would think that everyone you meet would suffer constantly from coffee-breath, but thankfully this is not the case…

9. What is a myth about your adopted country?
Some Canadians have told me of the strange ideas harbored about them south of the border. I’ll never forget the kitchen assistant at the hotel where we stayed when we first arrived, telling me how shocked some U.S. vacationers were to find that we are not submerged in snow all year round. Not to mention their disappointment on discovering that we don’t live in igloos and drive teams of huskies to work!

Contrary to some popularly held beliefs, we do experience four distinct seasons here.

10. Is the cost of living higher or lower than the last country you lived in and how has that made a difference in your life?
“We’ll wait and get it in Canada – it’ll be cheaper there” was a constant refrain in our house before we arrived here. I’m not sure where we got the idea from, but it proved to be unfounded. Perhaps people gave us that advice having visited the States, thinking Canada would be the same. It isn’t. Fuel, food, clothes and appliances are all more expensive here than in the U.S. It is a constant source of frustration to Canadians, who take shopping trips over the border to avail themselves of the bargains, particularly on Black Friday after the U.S. Thanksgiving holiday.

In comparison with Britain, groceries are the same or slightly more expensive, with the exception of meat. Fuel is cheaper, although try telling a Canadian that and you’ll likely get funny looks, as the cost of petrol has risen sharply here in the past couple of years. Drugs and medicines are fiendishly expensive, so are baby supplies. Clothes are about the same. With electronics, cars and houses (the last, dependent on location) you tend to get more “bang for your buck” here. Communications (Phone, internet and cable TV) are very expensive and so is car insurance for expats, as companies willing to consider your driving history abroad are few and far between. It was a year before we bought a car because we couldn’t find affordable insurance. A year in Canada without a car is a VERY long time!

11. What advice would you give other expats?
Get yourself involved and “out there”. You have roughly three months (everyone is different) until the honeymoon period wears off and you begin to pine for the civilized country you left behind. The friends who can stomach you throughout the “everything here sucks when compared to

Montreal Guide
To be considered for an interview (as well as other articles), add your blog to BlogExpat!