From Salt Lake City to São Paulo: Keeping Up With the Joneses 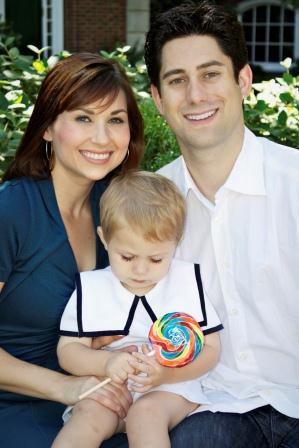 Oi! I’m Maike Jones (pronounced My-ka), an American expat living in São Paulo, Brazil. Originally from Salt Lake City, Utah, I spent my childhood and young adulthood in the scenic mountains of the western United States. My husband, son and I then moved to Boston, Massachusetts for two years, after which we made the big leap to São Paulo in July 2011.

1. Why did you move abroad?
My husband Porter, also a native Utahn, lived in Brazil for two years in his early-twenties. After completing our graduate and doctorate degrees in the United States, Porter pursued career opportunities fusing his MD/MBA and knowledge of Brazil and accepted a position with the #1 private hospital in South America. After working in politics for five years, I traded in the boardroom for the playground to be a stay-at-home parent, so my exhausting yet rewarding job goes where I go. However as a lifelong travel enthusiast, I was thrilled at the opportunity to raise our young family in an exotic land far away, so long as our accommodations included both running water and electricity.

2. How do you make a living?
As mentioned earlier, before becoming a mom I worked in politics and governmental affairs for an individual who was recently a candidate for President of the United States. When we moved to Boston I refocused my energy to raise our son as a stay-at-home parent. I’ve been encouraged to grow my blog into something that could translate into a career, but my personal blog about our loco expat experiences is just for kicks. Fortunately my husband gives me an undisclosed allowance with which I indulge in my passion--pretty designer stilettos!

3. How often do you communicate with home and how?
How often I communicate with home depends on the person with whom I’m communicating. My best friends and I email practically every day with antics from the latest news, celebrity gossip and fashion websites as well as updates on how we’re faring in life and love. We generally email “real family” on a weekly basis and talk via skype twice a month, depending when we’re in the mood to talk to the ‘rents. Thanks to skype and email we can still drive each other crazy from 6,000 miles away.

4. What's your favorite thing about being an expat in São Paulo?
There’s so much to love about this experience. I’ve enjoyed the bragging rights of being one of the most daring women I know as well as the immeasurable number of exciting destinations only a stones throw away (our goal is to visit every South American country and Antarctica while we live in Brazil). However the amazing Brazilian people who’ve lovingly welcomed us into their circle of friends is number one. I’ve been so humbled by how inclusive Brazilians are to foreigners. In my experience Americans sometimes accept strangers at arms length whereas Brazilians literally accept you as family. Seriously, our friends insist on bringing us to ALL their family functions. We’re the new extended family!

5. What’s the worst thing about being an expat in São Paulo?
The most difficult aspect has been accepting that while I learn Portuguese I’m the girl with little to no personality. I like to think I have a big personality with lots to say, perhaps too much, so this has been a personal challenge. Difficulty communicating happens to every expat who can’t speak the native tongue and other expats undoubtedly feel my plight. I meet with my language tutor twice per week but am still very far from having a stimulating conversation in Portuguese, not to mention I’m painstakingly slow at mumbling what little vocabulary I know. I’m unsure who’s more patient; me for learning Portuguese or my Brazilian friends who encouragingly smile while I fumble for words!

6. What do you miss most?
Although I love Brazil I also sorely miss the United States. On rare occasion I shed some tears when lamenting about my favorite breakfast cereals unavailable in Brazil. Then I slap myself until I’m re-convinced life goes on and chant my favorite quote by Abraham Lincoln, “Most people are as happy as they make up their minds to be.”

Besides the language barrier and missing close friends, what I pine for most is temporal. Prices are more reasonable in the United States, especially cars (FYI: Brazil is so expensive!) I miss many American restaurants as well as food and personal items I was accustomed to buying. Fortunately I have time to frequently travel to the United States and quench my American appetite. Trust me, my overstuffed suitcases put other overstuffed luggage to shame. What’s inside? Absurd amounts of cheerios, mac n’ cheese, licorice, peanut butter, and those stilettos I mentioned earlier.

7. What did you do to meet people and integrate in your new home?
We fortunately knew many native Brazilian and American expats in São Paulo through school connections made in Boston before moving to Brazil. Albeit comfortable, we committed ourselves to search beyond these networks and reach out to new neighbors via work, church, our neighborhood and son’s preschool. In fact I met my closest friends at my son’s swim lessons whose children are in his class. Besides being open to making friends just about anywhere, we accept every invitation to dinner parties and social events and likewise extend many invitations. Fortunately integrating has overall been a smooth process because Brazilians are social creatures--everyone wants to be your friend!

8. What custom/ habits do you find most strange about your adopted culture?
I find the devotion/obsession with rice and beans borderline nauseating. Brazilians eat rice and beans every day and often scoff at meals that don’t offer these staples. I can’t think of anything besides water and chocolate I could fathom eating every day. I’ve also never seen so many nannies on hand and don’t love the custom of dressing hired help in head-to-toe white. I understand the reasoning but personally think it negatively emphasizes social class, a problem that strongly persists in Brazil. Last, everyone kisses hello and goodbye on the cheek, something many Americans might find an invasion of personal space. As a foreigner trying to fit in I’ve embraced this custom to hopefully leave the impression that Americans are friendly!

9. What is a myth about your adopted country?
That it’s always hot! Local Paulistas joke that all four seasons occur in one day in São Paulo. As someone who’s endured New England weather, winter is a stretch but yes, 24 hours in São Paulo often feels like a brisk experience with spring, summer and fall. There’s also a misguided idea that Brazil is inexpensive if not downright cheap. I’ve traveled to more than 25 countries and São Paulo is one of the most expensive cities I’ve encountered; that is if you consider two hamburgers and sodas for US$50.00 cheap. Fries are an additional charge!

10. What advice would you give other expats?
My friend gave me the best personal advice after I gave birth to my son. She said, “Listen to everyone’s advice then disregard it. Do what feels right.” Although the situation was different the advice is the same, everyone has an opinion (granted some are even good opinions), but ultimately you’ll go crazy if you overly contemplate what others think is best for you (like unnamed family who insist we should “pack heat” to ward off potential abductions by Brazilian mafia--haha!). That said if you moved with family it’s a great time to form a stronger bond because for the time being, you might be all each other have. I feel especially close to my husband and son because our extended family is far away so we rely on each other for everything.

11. When and why did you start your blog?
I started my blog in 2008 when I learned I was pregnant to create a family history for my son. I often wondered what my parents did for fun when I was young, not to mention have a glance at my dad’s circa 1980’s Tom Selleck mustache, and my blog was a result of personal questions stemming from my childhood.

12. How has the blog been beneficial? 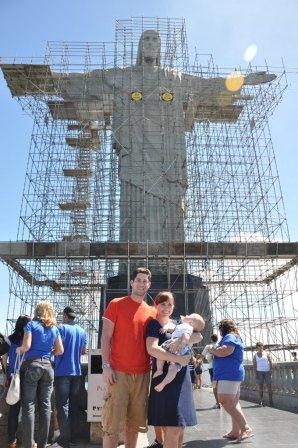 My blog reflects the stage our family is experiencing. After our move from Salt Lake City to Boston it grew into a forum to stay connected with family and friends and now as expats, has been a positive way to connect with fellow expats, share our experiences and learn from others who’ve traveled similar roads. The transition isn’t always easy and blogging is more therapeutic than shouting at one’s spouse, “We’re from the desert! Why did you move us to a country with unruly humidity?!” I’m joking… kind of. Jokes aside expats are the some of the friendliest people I’ve met the world over and I’m delighted my blog has connected me with so many fabulous expats. As they say in Brazil, beijos aka kisses!

Maike's blog, Keeping Up With the Joneses