The Wonders and Disappointments of an American Kitchen

On our house hunt of Berlin, I have been turned off by modern flats offering "American style" kitchens. That's weird, because on a recent trip back to the States I loved the acres of counter space and interacting with friends and family through the open plan. What's with my love/hate of the American Kitchen?

Funnily enough, two recent articles about the subject caught my attention. Expatify's article "American-style kitchens vs. expat-style kitchens" and Matador Network's "I hate your giant American kitchen" explore the big bad reputation of the American kitchen. Expatify's piece discusses it's not the size that matters; it's the food that counts. Matador's piece is less subtle. She really doesn't think bigger is better.

It's true that American kitchens tend to be huge ("American kitchen tends to be double or triple the size of kitchens in most of the world..." Expatify), painfully similar ("Cathedral ceilings, recessed lighting, granite countertops..." Matador), and are taking over the world. I couldn't believe the number of Berlin flats that have had their charming little Küche cruelly chopped out and replaced with a boring expanse of Ikea cabinets.

So what exactly is an American kitchen?

Think vast lands of granite counter space (and preferably an island). Think massive hoods over the stovetop. Think Contemporary. Bam! Today's modern American kitchen can be found in homes across the land.

I recognize the luxury of these amenities, but find I have probably always undervalued these virtues if I think of the kitchens in my past. Let's take a trip down my kitchen memory lane shall we? (My husband will be modeling the various kitchens’ amenities). 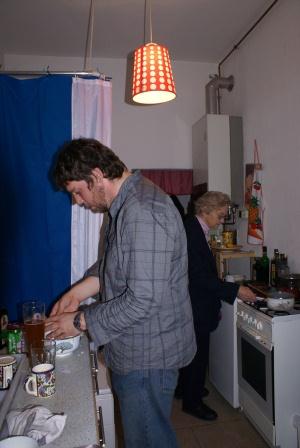 I was very proud of this apartment as it was our first real European apartment. What did that include? Note the blue sheet in the background. Yep - that's a shower. Yes, we were the proud owners of a kitchen shower. The bathroom was also just off the kitchen, although it was luckily kept behind a door. 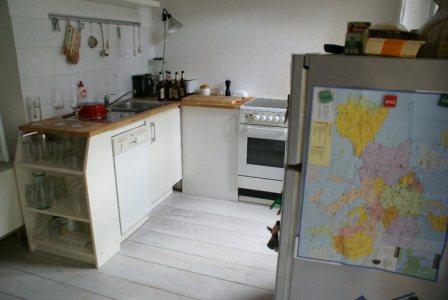 I loved this kitchen. Note the "huge" fridge Americans! Yes, huge. We've grown accustomed to the knee high dorm fridges that are so common in most of the world. We make do, shopping almost every day and tossing beer out on the balcony during the fall/winter/spring here in Berlin (one positive that we didn't move to an island in the sun). And really, who needs those enormous refrigerators? Right? Right?! 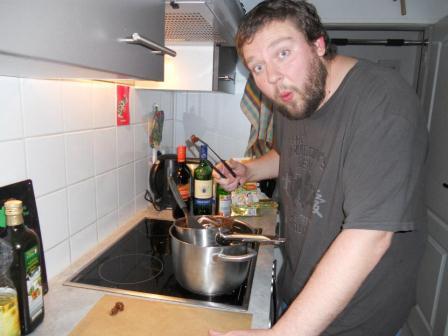 This third kitchen is by far the most modern of our Berlin apartments and by far my least favorite. It had been renovated, meaning it was much more expensive than other apartments and featured finicky laminate counters, large permanent shelving that took up too much room, and a slow electric stovetop versus my preferred method of gas. It did, however, allow us to make tasty treats like these chocolate covered gummi bears. Mmmmmm...chocolate. 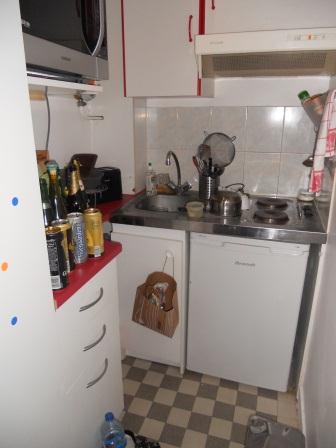 Just for fun, I added this picture of a Paris kitchen from the flat we stayed at over Christmas. There is enough space for a small fridge, microwave, 2 stove-top burner, sink, shelving and approximately one person. Admittedly, this is too small for me. But it was great fun for a week, figuring out how to boil some water and make a sauce at the same time.

Not impressed? You probably shouldn't be. I've loved each of our quirky little kitchens, but they hardly hold up to modern comforts. But that's me. I feel like I moved to Europe to hold on to these funny spaces, fighting the intrinsic American need to improve. Like a custodian of character or ringmaster of quirky kitchens I show my American friends and families pictures of our little kitchens and they just shake their head. I guess it's not for everybody.

What about you? What kind of kitchen is your place sporting? And where do you fall on the Great American kitchen debate?