While English is becoming the norm, the number of new (artificial) languages is expanding 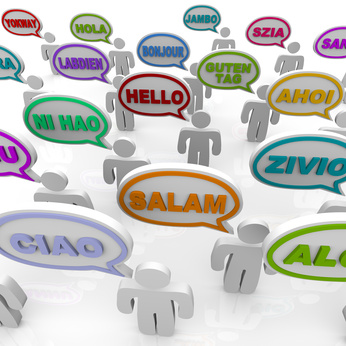 In a previous article, we have seen that the UK’s lack of language skills could cost the country £17 billion of loss in GDP (and although beginning in the 1990s, decline became more rapid after 2004, thanks to Tony Blair who had the brilliant (!) idea to make languages optional for GCSE, in order to show a better success rate).

All expatriates understand the benefits of languages. How frustrating it can be to be abroad and not be able to deal with simple things such as shopping or transport, without even talking about utility companies, properties or tax. Today we count about 7,000 different natural languages (as of 2009, SIL Ethnologue catalogued 7,358 languages grouped into 121 families, but the number may vary between 5000 and 10,000 depending on the definition of "different" languages or dialect), often spoken by only a few (96% of those languages are only spoken by 4% of the population). How many will still be there in 2100? Maybe only half of them as they often die out with the people that spoke them.

Some languages are progressing, such as Chinese. More and more people are learning it in European countries and in the United States. English remains the dominant choice in Occident, but Asian languages such as Hindi and Urdu, spoken in India, are increasing, along with Spanish (especially in North America). Developed countries are showing interest in keeping their regional languages with teaching of Breton (from Brittany) in France or Cornish (from Cornwall) in Great Britain. We know that being able to speak two or more languages is an advantage. With the world becoming more and more international, the trend will only continue. Expatriates already know the importance with many families and children (including their own) speaking several languages. It is a paradox: the more the relationships are becoming international with many people being able to jabber a bit of English, the more the need of mastering other languages is also needed.

J.R.R. Tolkien wrote in one of his letters : "what I think is a primary ‘fact’ about my work, that it is all of a piece, and fundamentally linguistic in inspiration. [. . .] It is not a ‘hobby’, in the sense of something quite different from one’s work, taken up as a relief-outlet. The invention of languages is the foundation. The ‘stories’ were made rather to provide a world for the languages than the reverse". The author of The Hobbit and Lord of the Rings constructed more than 20 languages with complete grammar and vocabulary (Elvish of course, but also Taliska, Khuzdul, Entish, Valarin...).

When Ludwig Lazarus Zamenhof created Esperanto (as a way of promoting the peaceful coexistence of different people and cultures), he tried to raise funds for two years to publish a booklet describing the language until he received the financial help from his future wife's father (the book was eventually published in 1887). He certainly wouldn't have thought that a century later professionals would make fortunes inventing languages for Hollywood movies.

Paul Frommer worked 6 months to create the Na'vi language used by James Cameron in his 2009 film Avatar. He based some Na’vi grammar on Polynesian languages and made creative decisions, like using consonants such as ejectives consonants (chosen by Cameron amongst other possible tones) and placing verb modifiers in the middle of words, instead of at the beginning or end of them. Disney recently hired Mr. Frommer to develop a Martian language called Barsoomian for John Carter, a science-fiction movie to arrive in March.

But the idea to make constructed languages for films may have started twenty years before, with the language spoken by the fictional Klingons in the Star Trek universe. The language was originally created by Marc Okrand for Star Trek III but has not spread as only a few people can speak it fluently (its vocabulary, heavily centred on concepts such as spacecraft or warfare, make it difficult for everyday usage ;-) ).

Suzette Haden Elgin created Láadan, a language aimed to be used by women. It was based on the concept that Western natural languages may be better suited for expressing the views of men, with women expressing how one feels about what one is saying, without being forced to respond "I know I said that, but I meant this" (Láaden has a word, "bala", that means "I’m angry for a reason but nothing can be done about it", different from "bama" which has no-one to blame, or "bina" which is like bala but with no reason :O ). The language was included in her 22nd century science fiction Native Tongue series.

The Language Creation Society (LCS), founded in 2007 by David J. Peterson (author of the famous Dothraki language for HBO's television series Game of Thrones), is a non-profit organization formed to promote constructed languages (conlangs) and offers services to make and support conlangers.

The created languages often have a complex grammar and extended vocabulary (Dothraki has got 3,163 initial words but aim to extend to reach about 10,000 words) which does not make it much different from languages such as Italian or Japanese. It appears that a language with many words is more difficult to learn, but is easier to express things, while a poor vocabulary will often need the help of the context.

Nowadays you can follow and learn the new "artificial" languages on websites such as dothraki.com (where you can find grammar and an English/Dothraki dictionary), laadanlanguage.org and learnnavi.org. You can also even follow them on twitter with @learnnavi. Some years ago the most common way to construct a language was to read Mark Rosenfelder's Language Construction Kit. Today the word langmaker in Google will bring thousands of result with many different easy guides to start a new language.

But although Hollywoods' needs are slowly transforming the obscure hobby of language construction into a viable, albeit rare, career, the time when we will  see na'vi or dothraki taught at school along with arab and swahili, is still far far away, if ever.

(source: based on a dossier from Courrier International [FR])