From Minnesota to Hanoi: Fishsauce, Motorbikes and the Golden Tortoise 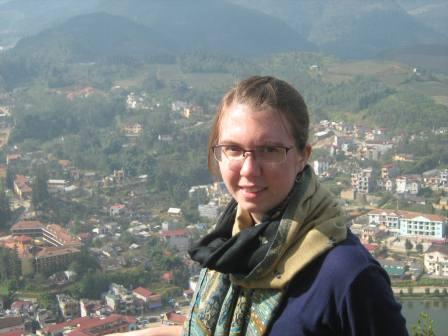 My name is Hannah and I’ve lived all over the United States, though most recently Minneapolis, Minnesota.  I’ve been living in Hanoi, Vietnam for nearly six months now.

1. Why did you move abroad?
I had planned to live abroad since I was a little kid.  I had a good role model in my grandmother who lived in Lebanon, Saudi Arabia, Egypt and Switzerland as a girl.  Additionally, I’ve lived in eight different US states.  Moving abroad seemed like a natural next step.  My parents weren’t shocked.  They’d sent one sister to study Arabic in Amman, Jordan, when she was 16, the other to study in Germany and me to study in France.  I moved abroad when I did, though, because I hated my job.  I scheduled medical appointments in a call center.  Despite seeming very sudden (I was offered a job and moved here three weeks later), the move was completely predictable.  To sum it up, I guess that I had always planned to live abroad but the decision to leave when I did was spurred by economics as I am going to be paying off student debt till I’m 400 years old.

2. How do you make a living?
I’m an English teacher, which I really enjoy, though I’m not sure I’d like to do it forever.  My first company was a language center, a private company that was, at one point in its history apparently, quite worthy of its reputation.  Now it’s really corrupt and hires a lot of unqualified teachers.  Also, I had to work at 7:00 in the morning on Saturday and Sunday.  I recently switched jobs and I’m now working at an international school, which has a much better schedule and more supportive co-workers, most of whom are dedicated, qualified teachers.  I’ll probably continue working there for the duration of the contract and I don’t know if I’ll seek out more teaching work once that’s finished or if I’ll go back to graduate school.

3. How often do you communicate with home and how?
I actually don’t talk to friends and family as often as any of us would like.  Everyone’s busy so it’s difficult to coordinate schedules for Skype sometimes, though I do talk to my mom and sisters quite regularly.  I talk to my best friend less often, partly because she’s insanely busy with law school and partly because she’s had a lot of trouble getting internet at her apartment.  We do email a lot and use facebook.  We’ve started emailing each other one crazy or amazing or terrible thing that happened during the day, sometimes with photographs, to make each other feel like we’re still in the same city.

4. What's your favorite thing about being an expat in Vietnam?
I’m enjoying the process by which things that are very different become normal.  For example, the electrical wires are a mess here; loose ends dangle into the street and the poles sag under the weight of a dangerous number of electrical lines.  I’ve seen overfull garbage trucks drive past and someone sits on top of the rubbish to lift the power lines so the truck can drive under.  These power lines used to scare me and, while I would never leave something like a space heater plugged in overnight, I’ve gotten used to it.  One of the coolest things about living somewhere is that all of these totally random, bizarre things begin to seem mundane.  That’s why I photograph them, to remember that it once seemed extraordinary.

5. What’s the worst thing about being an expat in Vietnam?
I really like to talk.  Talking in English or French with expat friends is no problem.  I can do that all night but English is not widely spoken in the north of Vietnam, so it is difficult to make friends with Vietnamese.  I’m learning Vietnamese but it is so hard that the process is going so slowly.  It’s tonal, like Chinese, and while the grammar is super simple each word could mean something different depending on which tone I use to say it.  My Vietnamese teacher told me last week that I sounded like I was singing.  This week she said I sounded like an adolescent boy whose voice hadn’t developed yet.  At least she doesn’t beat around the bush.  If only I had an ear for music but, alas, I am no one’s favorite singer at Karaoke night.  But, speaking even a small amount of Vietnamese helps a lot, until people assume I know more than I do.

6. What do you miss most?
It’s difficult to decide what I miss the most.  Listening to NPR and baking would be amazing.  I have no oven here and my computer won’t connect to public radio from the states for some reason.  I don’t miss anything terribly but I do eventually have to live in a city that has good public transportation; Minneapolis has quite a good bus system and Hanoi’s just doesn’t compare.  Oddly, I really miss snow.  Living in Minnesota, I hated the snow, but Vietnam’s change of season is not dramatic enough for me.

7. What did you do to meet people and integrate in your new home?
Well, I live in a shared house so I have three housemates.  Two, a French girl and an Australian just moved out and two Swedes just moved in.  So now it’s me, the Swedes and another Aussie. It’s not at all difficult to make friends with other expats.  I met my closest Vietnamese friend, though, by getting my motorbike fixed at her family’s shop.  We chatted for an hour while they were checking the bike and hang out regularly.  All of my housemates and I make an effort to talk to our neighbors, at least to say hello since we can’t say much else.  We also go to the same vendors in the market and shops over and over again.  It helps us get local prices and it lets the people working in my neighborhood know that I’m not just a tourist.

8. What custom/ habits do you find most strange about your adopted culture?
Shouting.  You have to be kind of pushy here and though I’m more direct than a lot of Americans (I dislike passive-aggressiveness), it’s uncomfortable.  I grew up in a place where you say, “Excuse me,” or make eye contact with the waiter in order to get service.  Here, you shout, “Em oi!!!!”  I’m getting used to it but it’s not easy.

9. What is a myth about your adopted country?
About two months after I moved here, I was on the phone with my sister and she said something about how I lived in a third world country.  Vietnam is absolutely not third world.  There are parts of it, really rural places like Cao Bang and Sapa, where people harvest rice and corn by hand, water buffalo stroll along the roads and pull the plow, but Hanoi is ambitious.  The most exciting thing about living here is that the country is developing every day so there’s a hopeful energy to it.  Development is embodied most, I think, in people’s drive to learn English.  Parents are enrolling their children in language centers, hiring private tutors and the government recently announced an initiative to improve the quality of English education in schools.  To reach its full potential, however, Vietnam is going to have to ditch the corruption.

10. What advice would you give other expats?
I have two pieces of advice that I think are really important.  First, be patient and have a sense of humor.  Your happiness will go in waves and some days you will feel like you are soaring one minute and like you want to cry the next.  Moving is really hard but once you’ve been in a place for a month or so, you’ll start to figure things out.  Suddenly, you’ll be driving around on your motorbike and realize that you know exactly where you are even though you’ve never been on that street before AND someone will be driving past with a red Christmas tree tied to their Vespa.  Second, learn the language.  No one is impressed by the expats who’ve lived in a place for five or so years but can still only order food and count.  You’ll gain a whole new understanding of your neighbors and adopted city if you learn the language.  Language isn’t rocket science; it’s common sense so don’t be overwhelmed by the process.  On some days, grammar will be the only logical thing. 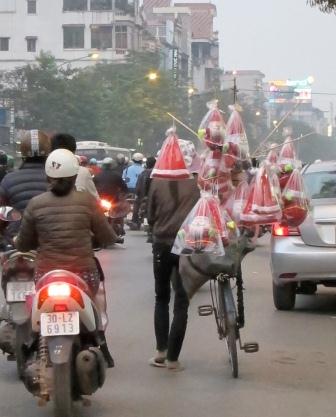 11. When and why did you start your blog?
I started the blog right around the time I moved to Vietnam.  It was mostly so I could post photos because facebook was so often blocked.  I don’t want to use it as a space to vent, though, so I try to keep it positive.  I am really detail-oriented so I like my photos to focus on the small quotidian things, like a beef carcass in the market or a fish market in Cao Bang, and I like to be funny.  You cannot live in Vietnam without a sense of humor.

12.  How has the blog been beneficial?
It helps me keep things in perspective.  If it’s been a crappy day but I need to post something, I like to choose a funny photo or story to share.  It reminds me that I love Vietnam, although we don’t have an easy relationship.