Expats Around the World Remember - 10th Anniversary of 9/11 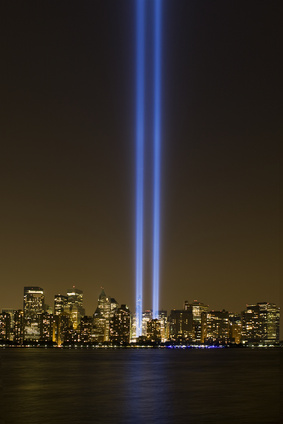 We are under 48 hours from the anniversary of the terrorist attacks that took place on the Untied States on September 11th, 2001. However, I wouldn't say we are 48 hours away from remembering the event. As if you could avoid the non-stop news coverage, I don't think it has left many people's minds since the attacks occurred.

The September 11th attacks, also called 9/11, were a series of four coordinated suicide attacks against targets in New York and Washington, D.C. on September 11, 2001. On that morning, 19 al-Qaeda terrorists hijacked four passenger jets, managing to crash two planes into the Twin Towers of the World Trade Center in New York City causing both towers to collapse. Hijackers crashed a third plane into the Pentagon in Arlington, Virginia and in the fourth plane passengers attempted to take back control of the plane which prevented it from reaching its intended target in Washington, D.C, but did result in it's crash in Shanksville, Pennsylvania. In total nearly 3,000 people died in the attacks from over 90 different nations.

Rebuilding has been slow, mentally, emotionally and physically. As the anniversary looms, New York City is ready to open the National September 11 Memorial & Museum. Adjacent to the memorial, One World Trade Center is estimated for completion by 2013. The Pentagon was repaired within a year, and the Pentagon Memorial opened in 2008. The Flight 93 National Memorial in November 2009, and the memorial is to be formally dedicated on September 10, 2011. On the day of the attacks, New York City mayor Rudy Giuliani proclaimed, "We will rebuild. We're going to come out of this stronger than before, politically stronger, economically stronger. The skyline will be made whole again." It seems as if this promise is finally being fulfilled.

There are many, many events taking place in New York City this weekend. Here is a complete listing of events.

I think that people want peace so much that one of these days government had better get out of their way and let them have it.
American President Dwight D. Eisenhower

EasyExpat welcomes your thoughts, stories, and informational about memorials in our forum and in the comments section.