Respecting Ramadan as an Expat or Traveler 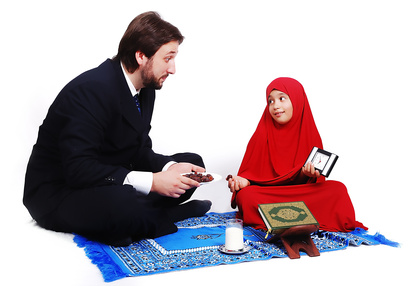 The ninth month of the Islamic calendar is the Islamic month of fasting, Ramadan. Believed to be the month that the Qu'ran was revealed to the prophet Muhammad, participating Muslims refrain from eating, drinking smoking, sexual intimacy with their partners and negative behaviors like swearing, lying and getting angry from Imsak, which is just before sunrise, until Maghrib, at sunset. This is in order to purify the soul, refocus attention on God, and practice self-sacrifice. Ramadan is much more than abstaining, Muslims believe Ramadan is a time to read the entire Qu'ran and is an auspicious month for the revelations of God to humankind.

Tarawih prayers - In the evenings, many people go to the mosque to perform extra prayers. Every night one thirtieth of the Qu'ran is recited, so that by the end of the month, the entire Qu'ran has been read. People wish each other "Ramadan Kareem" or "Ramadan Mubarak" for a successful, happy and blessed month.

Iftar - At sunset, the family will gather the fast-breaking meal known as Iftar. The meal starts with the eating of three dates - just as Muhammad did. Then it's time for the Maghrib prayer, which is the fourth of the five daily prayers, after which the main meal is served.

Laylat al-Qadr - Referred to as "the night of decree or measures", Laylat al-Qadr is considered the most holy night of the year. This is the night in which the Qu'ran was first revealed to the Prophet Muhammad. Also, it is believed to have occurred on an odd-numbered night during the last 10 days of Ramadan, either the night of the 21st, 23rd, 25th, 27th or 29th.

Eid ul-Fitr - Eid marks the end of the fasting period of Ramadan and the first day of the following month. The Eid falls after 29 or 30 days of fasting, per the lunar sighting. Eid ul-Fitr means the back to the fitrah. Food is donated to the poor (Zakat al-fitr) as charity is important during Ramadan, to be reward 70 times greater than any other time of the year. Everyone puts on their best clothes and communal prayers are held in the early morning, followed by feasting and visiting relatives and friends. The prayer is two Raka'ah, and it is sunnah muakkad as opposed to the compulsory (Fard) five daily prayers. Muslims are expected to do this as an act of worship, and to thank God.

How to Be Respectful

Though these requirements only directly pertain to Muslims, many of these recommendations are appropriate for everyone to reflect on. To be positive, patient, kind, well-meaning and charitable are sentiments everyone should be able to focus on.

Pros & Cons of Visiting during Ramadan

How Expats can Show Respect

Just as tourists are not necessarily expected to follow Ramadan, respect for the holiday is important. Legal authorities are often on the lookout for any inappropriate behavior demonstrated by non-Muslims. In Dubai, police have been instructed to initially issue a warning to offenders before awarding fines of to $550 USD for any infractions.

If you employ domestic staff who are Muslim, you should be aware of their dietary needs. This may have an impact on their ability to perform their day-to-day tasks. Allow employees to complete any strenuous jobs first thing in the morning, after they have eaten, and respect the fact that they may grow tired in the afternoon from abstaining. In some countries, such as Indonesia, you will be expected to pay a one-month bonus to all domestic help and household staff near the end of the fasting month.

Try to maintain a quiet demeanor during Ramadan. This includes refraining from playing loud music at home or in your car, avoid swearing, dress especially modestly, and not dancing in public. Note that these behaviors are considered highly disrespectful and are not acceptable on your balcony or car if you can be observed. It is polite to refrain from eating, drinking and smoking in front of those who are fasting. In some countries, such as Dubai, it is illegal to eat and drink in public during the month of Ramadan. As an additional resource, expatriates living in predominantly Muslim countries will also find Ramadan etiquette guides in their local newspapers.

Participate in the community and celebrations. The numerous charitable events are the perfect place in which to show your participation. Charity is a positive act no matter your religion or location and will be highly respected. And though the city can be repressively somber during the daytime, sundown is an event for daily celebration. Connect with your Muslim neighbors, co-workers, and acquaintances and take the opportunity to learn more about the people and place you now call home.