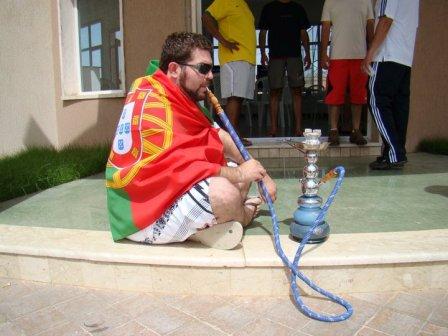 My name is Tony and I was born (to Portuguese parents) and raised in South Africa. After 18 years in the motherland, I moved to London where I (and my parents) decided would be the best place to become smart (otherwise known as a university education). After living in London for six years (and seeing the sun for a total of 7 days in those 6 years), I decided to move after getting a job offer in Abu Dhabi. A year after arriving in Abu Dhabi, I was posted to Tripoli, Libya until the current revolution meant relocating once more, this time to Beira, Mozambique.

1. Why did you move abroad?
I moved abroad (to London) because my parents and I thought it would be a worthwhile experience to study in London as opposed to going to college in South Africa. It was probably the best decision ever made, as moving from my 20,000 population town to a cosmopolitan city like London, meant growing up very quickly and gave me the opportunity to meet people from places I never even knew existed!

2. How do you make a living?
I’m a glorified builder (or engineer if you want to be technical). It’s actually quite useful job as it allowed me to travel due to work. Mozambique is the third country that I’ve worked in with my current company. The other great thing about working as an expat on the type of contract is that you have regular holidays which meant that I could indulge in some more travelling.

3. How often do you communicate with home and how?
Facebook is one of the ways I keep in touch with my friends, though I tend to use phones and Skype with my family and fiancé as its always better to see their faces and hear their voices than just seeing a message written by them

4. What's your favorite thing about being an expat in Mozambique?
I’ve been in Beira for just over a week so I’m still settling in, but one thing I definitely like so far is how friendly Mozambiqueans are. No matter where you are, they always greet when they walk in. The other thing I love is living right on the beach. Waking up to hearing waves break on the beach is definitely a change to hearing car horns.

5. What’s the worst thing about being an expat in Mozambique?
The only thing I can complain about is the state of the roads in the city.

6. What do you miss most?
Having been away from home for almost 10 years, I’ve gotten used to homesickness and missing my family, though there is one person that I miss terribly on these assignments, my fiancé.

7. What did you do to meet people and integrate in your new home?
I’m lucky as my company has quite a large presence in Mozambique so there are a lot of other people who are in the same boat as me so it makes it easier to adjust.

8. What custom/ habits do you find most strange about your adopted culture?
So far nothing to report from Mozambique, but I’ll share some the strange things from the other places I’ve lived in.

United Arab Emirates: Emirati men greet each other by touching their noses.

Libya: Libyans (and most other Arabs) have habit of saying Inshallah (God Willing) after everything which can be quite disconcerting at times. I once caught a taxi in Tripoli and when I asked if he could take me to my house, he says “Inshallah!”… That didn’t leave me very confident of his driving skills.

A general comment about customs in adopted countries and cultures is the working habits of the local population. Sometimes their views on work and their approach to it can be infuriating but at times it can also be humbling as they do teach that sometimes there is more to life than work

9. What is a myth about your adopted country?
I don’t know any myths about Mozambique, but I´m sure there will be some myth busting during my stay, but I can share myths about the other countries I´ve lived in:

United Arab Emirates and Libya: The myth that some people have that all Arabs are American and/or foreign hating religious zealots. This myth is perpetuated by sensationalist media outlets. My experience in these countries (including other Arab countries I´ve travelled to like Lebanon, Syria and Oman) shows that Arabs like any other group of people are curious about foreigners. They don´t always agree with what you think but that doesn´t mean that they are going to kill you on the spot as some people in the media make you believe.

Quite the contrary, Arabs are some of the most hospitable people I´ve come across in my travels and work. I never encountered a situation where I felt threatened in any way and usually the people I talk to tend to be curious about what my country and are willing to talk about it for as long as you want. Yes, their beliefs are different to mine and most westerners, but they do have respect for those beliefs.

10. What advice would you give other expats?
Fully embrace the new experience no matter how difficult the place is.

Explore where you live, do as much as you can to get to know the area, city and country.

Always try and learn the basics of the language in your adopted country as 99% of the time locals always appreciate it and thus are nicer and even more helpful. 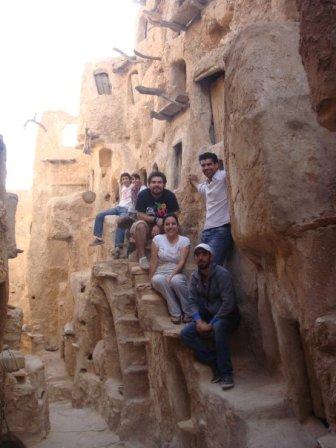 I started my blog a couple of weeks after arriving in Libya as a way to help my friends and family  keep up with how things were going.

12.  How has the blog been beneficial?
The blog was a great coping mechanism in Libya on the days when I felt kind of blue as it meant I could write about my frustrations and troubles with adapting. The blog was also useful for people who didn’t know anything about Libya as it shed some light on a country which were hidden away for so long.


The blog also led to some interesting opportunities as I became a writing contributor to Look Out Libya, a site dedicated to expats moving to Libya.


The other great thing about the blog is that it’s a great kind of diary to look back at in the future.

More articles
Protests in Asia and how they affect expats
Beside the Covid pandemic, there has been an increase in political unrest in recent months, particularly in Asia, that ...
UK Pensioners in Europe post Brexit
Brexit has affected many facets of life for UK nationals like trade and freedom of movement in the EU but it also ...
How pensions work after Brexit
The last minute deal negotiated for Brexit contains a section dedicated to social security cooperation. Not much change ...
Ideas of budget-friendly travel after the pandemic
Argentina, Romania, Turkey, but also more simply theme parks closer to your home, here are some ideas for a change of ...