From Paraguay to America to Argentina and back: Nomadic Behaviour 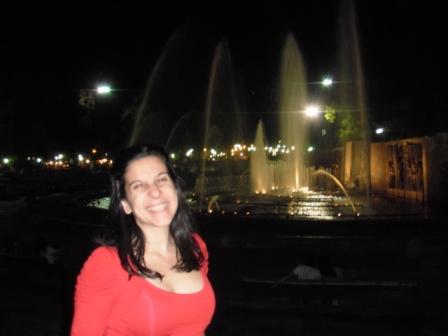 My name is Natalia Fernandez. I was born in Paraguay. My father was a diplomat and my mother an Argentine expat.  I grew up as a TCK (third culture kid) so asking me where I’m from will result in more then one possible answers. I grew up in Chile, The United States, Paraguay, Argentina and Peru.  Our family moved to the US from Chile in 1981, and we grew up and enjoyed childhood until 1993.  There was a change of government in Paraguay, the first civilian president.  I finished elementary and middle school and we were off again. This time it was Peru. Here, I finished high school and went to Paraguay and Mexico for university. After living in Paraguay for a few years, I decided to start travelling, so I did. I traveled all around the southern cone, until Christmas every year when it was back to Paraguay for a couple of weeks.

I am currently living in Paraguay, visiting relatives and family before I leave again. It’s good to have a home base where someone is always waiting for you.  My husband and I love to travel, in fact he wouldn’t be my husband if he didn’t. We’re on a quest for the perfect place to live and love life.  I’m not a complicated person, I don’t drive, I never owned a car, I walk. I don’t use creams or make-up that often; it takes me 30 seconds to get ready to go out. We have a grain and sugar free diet, we’re careful about what we put in out bodies. I LOVE origami and have a website that makes origami balls in exchange for donations for prosthesis for people living with phocomelia in Paraguay, like myself: www.kusudamaco.wordpress.com.

This summer we are going to Florida, let’s see where we decide to go from there.

1. Why did you move abroad?
I first moved abroad before I was less than a year old.  My father went on mission to different countries all over and we had to go with him. It’s expensive for a country like Paraguay to constantly relocate a family of 4 but it was also very important for the rest of the world to see what a Paraguayan family was like.

Growing up like this sucked. I was always changing schools and moving to other countries. However, I became a polyglot and have the ability to understand many different cultures, and have given me an extraordinary ability to adapt to my surroundings.  And as an adult I now realize I was very lucky to have these experiences growing up.

2. How do you make a living (working? Tell us about your experience)?
I make my money online, it keeps me mobile. I teach and write for money online.  I’m a biologist, a naturalist and specialize in sustainability and self sufficient farming. Thanks to digital books and the internet it’s easy to learn about your surrounding natural environment, so the more I travel, the more I lean.

3. How often do you communicate with home and how?
Skype. I gave my mother a computer for Christmas.  We skype all the time, almost every day! My sister is also an expat, she and her family live in Scotland.  It’s the best way for us too keep in touch, it’s free and simple.

4. What's your favorite thing about being an expat?
I’ve been an expat all my life.  When I first return to Paraguay I was 13. Everything was so different from the other “western” places I’ve been living. My mother made sure we were aware of who we were and we would visit Paraguay regularly, but it wasn’t until we moved that I realized how different the world could be.

Chickens and cows running around on the streets, old ladies selling visceral organs of the back of a mule, it was all fascinating and super gross (but cool).

When we move to Peru, the bus system, the danger (back then at least), the food, the llamas! Wherever we went, we had to represent our country and I had to understand the culture I was living in. That’s what you do when you’re the daughter of a diplomat on Foreign Service.

5. What’s the worst thing about being an expat in Argentina?
Argentineans are not all the same.  There are 2 types: the ones that live in Buenos Aires Capital and the ones that don’t.  Asking directions is hit or miss, they don’t want to tell you “they don't know” so they may give you the wrong direction.

People from Buenos Aires are very disrespectful; they judge you on the color of your skin and your place of birth.  I’ve thrown lots of drinks into peoples faces’, and they’ve deserved it.

The rest of Argentina is very different, more representative of the warm, friendly and helpful people that Latin America has a reputation for. So if you want to visit Argentina, remember: it’s a HUGE country and Buenos Aires, although a great place to start off- not the best to learn about the country.

6. What do you miss most?
My family, the food, my friends, the rawness of the native language.

7. What did you do to meet people and integrate in your new home?
I use Couchsurfing the most. I’m not a high end traveler, I want to meet real people that have regular jobs and that do regular things. I speak the language so I don’t have a problem meeting people.

8. What custom/ habits do you find most strange about your adopted culture?
Siesta. Except for Buenos Aires, the country sleeps from 1 – 4 pm. All shops are closed for 4 – 5 hours and then open up from 5 – 8.  It takes a while to get used to.

9. What is a myth about your adopted country?
Over 95% of the population is white. We’re not all Indians riding on horses down here.

10. What advice would you give other expats?
Keep an open mind and learn the language.  It’s that simple.  These two things are key to surviving as an expat anywhere you go.

Learn about the history: It will help you understand customs and the way things are done. Don’t expect everything to be “western”. If you hang out at Starbucks all the time, what’s the point of being an expat?

11. When and why did you start your blog?
I started my blog last year after my father died.  He was an amateur historian but was never organized enough to write. I hope to one day be a published author,  there’s so much that needs to be told.

12.  How has the blog been beneficial?
It’s mostly helped improve my writing.  My family doesn’t read my English blog at all, neither do most of my Spanish speaking friends.

These aren’t the people I want to write for.  If Spanish is your native language, understanding Argentina or Latin America in general is not a big problem. I write in English because I can, and although I may sound American, my mind is a mix of all the countries I’ve had the privilege to grow up in.  Lucky me!

To find out more about being an expat in Argentina, Easy Expat's Buenos Aires Guide

More articles
The rise of electric cars across the world
Experts in the motor vehicle industry believe that electric vehicle (EV) sales are on the path to surpass petrol and ...
What are the possibilities for children travelling alone?
Most of airline and rail companies do not offer possibilities for children to travel without relatives or parents. ...
Best locations in Luxembourg with serviced apartments
If you are preparing to relocate to Luxembourg, then you probably are aware of its high property and rental prices, and ...
Cities with congestion zones
Major cities like London, Paris, Milan and Copenhagen have instituted a variety of urban vehicle access regulations and ...
How to move with peace of mind in 2021
Whether you are relocating solo or as a family, planning is the watchword for relocating during the pandemic. ...