Volcanic ash consists of small tephra (particles of rock and glass smaller than 2 mm). This ash can be spewed into the air during eruptions. Volcanic ash can be hazardous as it can affect breathing and cause malfunctions in machinery. 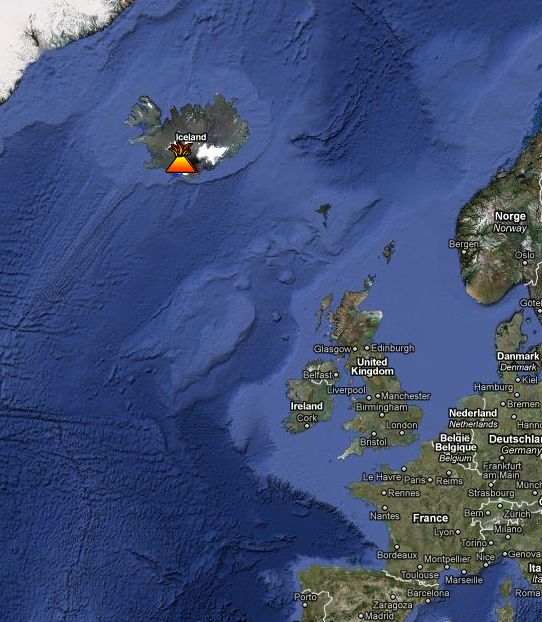 The volcanic eruption in Iceland of Eyjafjallajokull (pronounced ay-yah-FYAH-lah-yer-kuhl) is believed to have started on March 20th, and led to a worldwide transportation disaster. The ash cloud hovered over the Atlantic Ocean and caused a week-long suspension of air traffic in Europe. Ash turned the sky hazy and tinted it a dirty yellow. Volcanic ash particles cans stay in the troposphere for weeks, and the finest tephra particles remain in the stratosphere for months. This suspended material can create spectacular sunsets. At its greatest height, the plume reached 33,000 ft (about 11 km) into the air. The controlled airspace of many countries was closed to instrument flight rules traffic resulting in the largest air traffic shut-down since World War II. 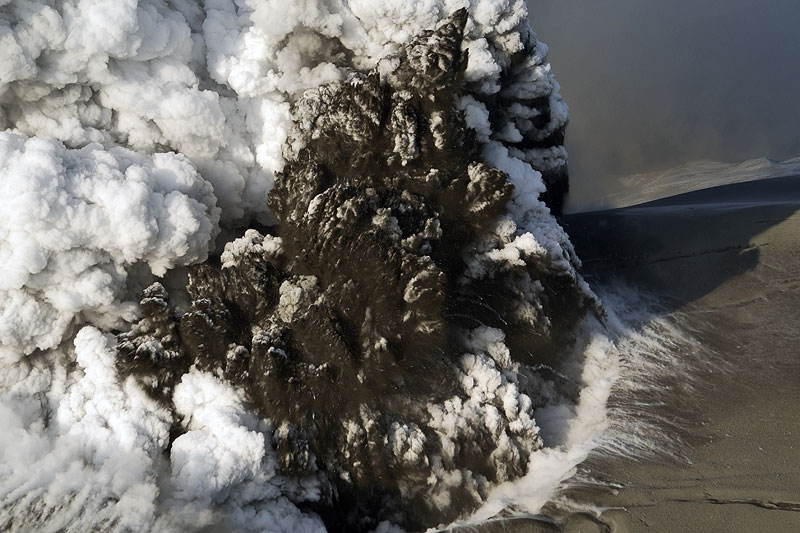 Day-to-day life in Iceland continued with very little disruption. Businesses were open as usual and people went about their usual routines.

Effects of Volcanic Ash on Airplanes

Sandblasting effect- Ash can "blind" pilots by sandblasting the windscreen requiring an instrument landing, damage the fuselage, and coat the plane.

Clogging of the plane's sensors- Accumulation of ash can also block an aircraft's pitot tubes. This can lead to failure of the aircraft's air speed indicators.

Combustion power failure- Damages the machinery as large amounts of air are sucked in during combustion operation, posing a great danger to aircraft flying near ash clouds. Very fine volcanic ash particles (particularly glass-rich if from an eruption under ice) sucked into a jet engine melt at about 1,100 °C, fusing onto the blades and other parts of the turbine (which operates at about 1,400 °C).

Airspace was largely re-opened on April 23rd, 2010, but was intermittently closed in different parts of Europe in the following weeks. To track the ashfall, the Icelandic Meteorological Office issues daily forecasts of ashfall. By the 21st of April, 95,000 flights had been canceled. The International Air Transport Association (IATA) estimated that the airline industry worldwide would lose €148 million (US$200 million) a day during the disruption.

The closure of the airspace left five million travelers stranded around the world. Airports in the east, such as Portugal, Morocco, and Turkey were open. Once inside Europe, many people tried to reach their final destination by train or road. Once travelers made it to France, travel conditions continued to be poor as there was an ongoing rail strike affecting long-distance trains.

Compensation from airlines and travel insurance was received to some, but the vast majority of people were out considerable sums of money and time.

Since many travelers were stranded in Great Britain, Eurotunnel allowed driving access from the island to mainland Europe. During the worst parts of the crisis, bookings rose 30 percent. One-way fares cost about £150 per car. This can include up to nine passengers plus luggage. Travel off-peak and lead-in fares are from £44.

Eurostar (08432 186186) was another option as this train carried an extra 110,000 people during the ash shutdowns. Cheapest return fares are around £69 from London to Paris. However, they did reach capacity and Eurostar passenger trains were solidly booked.

Ferries (0871 244 1400) offered yet another option, departing from Portsmouth or Plymouth to Santander. Peak pricing for ferries to Santander start at £675 return for a car and four people, including en-suite cabin accommodation. Journey time is 24 hours.

Some passengers were ferried to Britain after the British cabinet crisis response committee (COBRA) decided that Royal Navy ships should be utilized to repatriate stranded British travelers.

How Has The Volcanic Ash Cloud Affected You?

Tell us your story in the comments below...