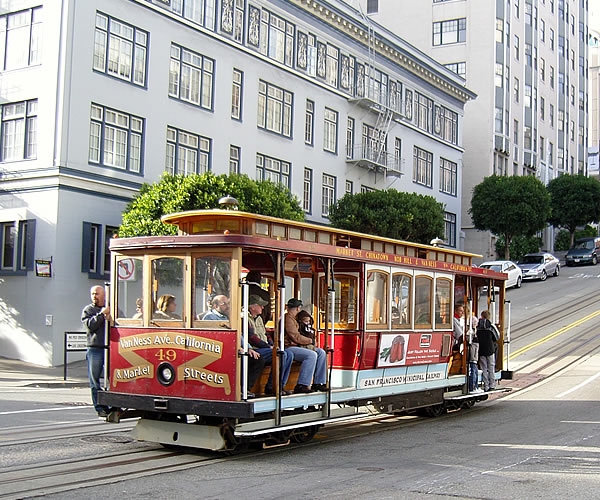 San Francisco is a lovely city to travel by walking, even with the hills, but there are a variety of transportation options from which to choose. There are several different modes of public transport including the iconic cable cars and buses. There are miles of bike lanes, and many different companies in which to rent a car. Ferries and boats even make the waterways accessible. A variety of maps, like www.pocketbaymaps.com/, make traversing the city a bit easier.

"Green" (environmentally friendly) and public transportation are more popular here than in almost any other US city. Bicycling has about 40,000 residents on the move to work regularly. The city has worked to make this a better option with additional bike lanes continually being added to the already 68 miles (109 km) of bicycle lanes. Rideshare is an organization that allows interested parties to find a convenient carpool. Also, nearly a third of the commuters use public transportation. The San Francisco Municipal Railway, known as Muni, make public transport possible with a combined light rail/subway system (the Muni Metro) and a bus network that includes trolleybuses, standard diesel motorcoaches and diesel hybrid buses. The Metro streetcars run on surface streets in outlying neighborhoods but underground in the downtown area. In addition, there is the F Market historic streetcar line, which runs on surface streets from Castro Street to Fisherman's Wharf and the iconic San Francisco cable car system which has been designated as a National Historic Landmark.

If you are interested in riding transportation frequently, buy a Fast Pass. The pass costs $45/month ($10 for senior and youth passes). Weekly passes are valid for one week's unlimited use on all Muni lines, Monday to Sunday. Passes are $15 and there is $1.00 surcharge to ride the cable car. Convenient of visitors, Muni Passports are available for one, three or seven consecutive days of rides.

Muni Metro is a mass transit system operated in the City and County of San Francisco. Metro cars have been made to fit the historical context of transportation in the city. Muni operates 80 routes throughout San Francisco with stops within 2 blocks of 90% of all residences in the city. This is the second busiest public transportation in the United States.
Basic Muni fare (for bus, metro and streetcar) is $1.50, and includes a transfer good for 90 minutes. The fare for seniors, youth, and people with disabilities is $0.50.
Muni Metro runs from approximately 5 am to 1 am weekdays, with later start times of 7 am on Saturday and 8 am on Sunday. Late-night service is provided along much of the L and N lines by buses that bear the same route designation.
Route planner is available on the website (or use transit.511.org/accessible/tripplanner/index.aspx), or make a free call from the San Francisco Bay Area by dialing 511, say "Muni", then "Operator".

Landmark cable cars started as an idea of Andrew Hallidie in 1873 when he gave the system it's first test run. Over the years, the system grew and developed along with the city and became as much a symbol of the city as the Golden Gate Bridge. This is the world's last permanently operational manually-operated cable car system! The driver of a cable car is known as the gripman. This is a highly skilled job, requiring the gripman to smoothly operate the grip lever to grip and release the cable, release the grip at certain points in order to coast the vehicle over crossing cables or places where the cable does not follow the tracks, and to anticipate well in advance possible collisions with other traffic that may not understand the limitations of a cable car. Only about 30% of people who attempt the training course actually pass and there is only one grip woman, Fannie Mae Barnes, hired on January 15, 1998.
Compared to other aspects of the public transportation system, the map is quite limited, but people still come from around the world to ride the rails.


Tickets can be purchased at turnarounds or from the conductor as you board and the fare is $5.00 each way. For seniors and people with disabilities, fares are $1.00 before 7:00am and after 9:00pm.

MUNI buses work in combination with the light rail lines to offer coverage over the entire city. Sometimes crowded, but fairly comfortable, buses are another easy way to get around. The buses are also hybrid electric and thus green friendly. Next Muni is a convenient feature that allows riders to be able to see exactly when the next bus arrives as the vehicles are tracked by GPS.
Tickets are sold on the bus, but exact change required, or in Muni metro stations. Transfers last 90 minutes. If you plan to see a lot of San Francisco and stay for a few days, invest in a MUNI Passport which are on sale at the cable car turn around.

The Transbay Terminal serves as the terminus for long-range bus service (such as Greyhound) and as a hub for regional bus systems like AC Transit (Alameda County), SamTrans (San Mateo County), and Golden Gate Transit (Marin and Sonoma Counties). Amtrak also runs a shuttle bus from San Francisco to its rail station in Emeryville.

Originally dreamed up in 1946 and finally constructed in 1964 as a solution to congestion, BART (Bay Area Rapid Transit), is an excellent source of transportation in the bay area. These commuter trains are composed of five lines on 104 miles (167 km) of track with 43 stations in four counties. Around 375,000 passengers ride BART each week making it the fifth busiest rapid transit system in the United States. Trains appear about every fifteen minutes on weekdays and twenty minutes during the evenings, weekends and holidays; however, since a given station might be served by as many as four lines, it could have service as frequently as every three to four minutes.
Fare is based on a formula that takes into account both the length and speed of the trip. A surcharge is added for trips traveling through the Transbay Tube, to San Francisco International Airport, or through San Mateo County. A stored-value card fare system, the TransLink smart card, is used to pay for transportation and has many different plans to suit every rider. The fare calculator can help find out the exact cost of a ride, but $1.50 is the base price of trips under 6 miles (9.7 km). The http://www.bart.gov/tickets/calculator/index.aspx. This system is slightly faster in downtown San Francisco than the city's light rail system.

Amtrak is a national service that connects to San Francisco through a shuttle bus from San Francisco to its rail station in Emeryville. From here, riders can travel across the country.

Oakland International Airport: This is the airport furthest from downtown San Francisco, but still is an international carrier which services 15 million passengers annually.

San Jose Airport: The smallest of the three bay area airports as it is surrounded by the city of San Jose, but still serves around 11 million customers a year.

Be careful with yourself and your belongings and ignore offers of transportation from solicitors in the terminal. Go to ground transportation information counters, bus stops, and taxi dispatchers for safe and legitimate transportation. Ignore non-uniformed persons offering to assist with baggage.

Finding a taxi should not be a problem within the city, especially around tourist attractions. To make sure you have found a safe taxi (insured, background check on driver, security cameras), look for: the words "San Francisco Taxi Cab" on the side and rear of cab, small metal license plate on the dashboard, and a drivers ID visible from the backseat.

The charges for riding in a taxi are standard and should match up to these charges. Ask for a receipt at the end of your ride to examine your bill and to have the number of the taxi you rode in.

Passengers also pay for bridge tolls. For distances 15 miles or farther outside the city limits, taxis will charge 150 percent of the metered rate. Tip 15 to 20 percent of the total fare.

Most major car rental companies have outlets at the major airports. To reserve a car, you can often find the best deals by reserving on-line, but most companies offer a phone number to help customers with any questions they may have while also taking reservations by phone. Most companies will require a major credit card to reserve a car.

On a day-to-day rental, a car will cost (without insurance) $14 and up for a used car and $40 and up for a new car. A month's rental of a car will average around $575 (not including insurance or a security deposit). For a smaller car, prices will range between $300 and $600 per month (not including insurance or a security deposit). Prices vary considerably depending on the dealer, the size of the car, and the make and model. Most companies offer free pick-up, so ask what services are included when making your reservation.

To check traffic conditions on-line: www.sfgate.com/traffic/ or www.traffic.com/San-Francisco can help find the fastest ways around the city. To find out the cheapest places to get gas, go to www.sanfrangasprices.com/.

If you want to move money abroad, from or to for example, Fexco provides efficient and secure global bank to bank transfers and bespoke payment solutions for both business and personal clients.

Do you have comments or personal information to communicate about this article? Add your comment.
Find links about practical life / transport in San Francisco and a lot more in The links of expatriation.
Find more definitions and general answers on expatriation issues in the Expat FAQ (Frequently Asked Questions).
Read more...


Go to the Forum to talk more about transport in San Francisco, practical life.
Search for members in