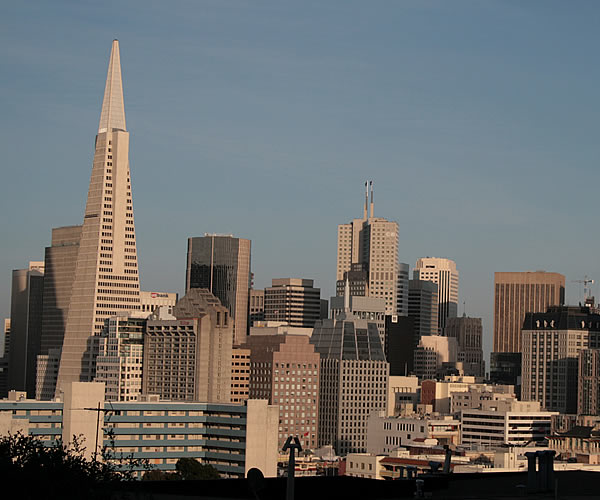 The United States lies within the western hemisphere in North America. The country is bordered by Canada to the north, Mexico to the south, the Pacific Ocean to the west, and the Atlantic Ocean to the east. The United States of America are comprised by fifty states and a federal district. In total, USA is 3.79 million square miles (9.83 million km²) and has more than 300 million people. It is the third largest country by total area, and third largest by land area and by population.

San Francisco sits at the tip of the San Francisco Peninsula on the West Coast of the United States. The city is located almost in the center of the state of California's long coastline. The San Francisco Bay and Pacific Ocean lie on opposite sides of the peninsula and are prominent features of the city, as are several islands that belong to the city including Treasure Island, Yerba Buena Island, and the notorious Alcatraz. One of the most identifiable features of the city are the 43 rolling hills the city is built on and the beautiful Victorian homes and cable cars that dot them.

California has a Mediterranean climate with mild, wet winters and dry summers. San Francisco is surrounded by water on three sides which heavily influences it's climate and makes it more mild then its neighboring California cities with little seasonal temperature variation. Average summertime temperatures are between 59 to 75 degree Fahrenheit (15 - 24 Celsius) and between 50 to 59 degree Fahrenheit (10 - 15 Celsius) in the winter. The city's temperature barely ever reaches freezing. A common saying is that San Francisco has three seasons: winter, summer and fog. The combination of cold ocean water and the high heat of the California mainland create foggy conditions throughout the spring and early summer. Eastern neighborhoods are somewhat less foggy because of the hills which separate the ocean air from the mainland temperature. This side of San Diego has an average of 260 clear days a year. For current weather conditions, http://www.wunderground.com/US/CA/San_Francisco.html.

The San Andreas and Hayward Faults are responsible for much of California's earthquake activity and this effects San Francisco indirectly. Minor earthquakes occur here on a regular basis, with the last major earthquakes occurring in 1989 with an earthquake measuring 7.1 on the Richter scale. There is a long-standing joke in much of California about the "Big One" that will send California sliding into the Ocean. For current data, check out www.data.scec.org/index.html.

Do you have comments or personal information to communicate about this article? Add your comment.
Find links about overview / geography of San Francisco and a lot more in The links of expatriation.
Find more definitions and general answers on expatriation issues in the Expat FAQ (Frequently Asked Questions).
Read more...


Go to the Forum to talk more about geography of San Francisco, overview.
Search for members in the Usa