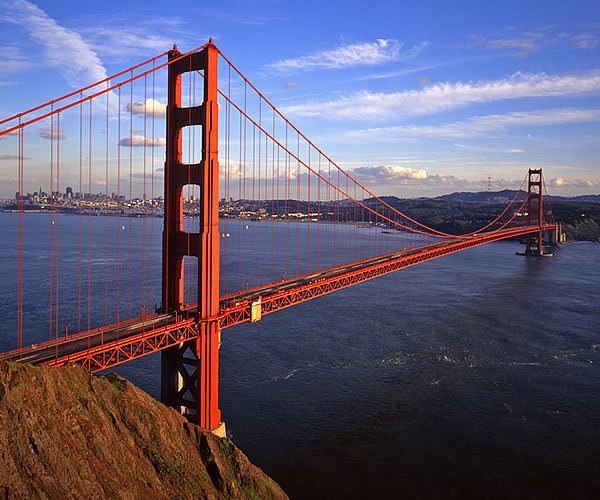 San Francisco is a place to just experience by walking around and "getting a feel" for all the city has to offer. A guided tour of a specific attraction or the city as a whole can be an excellent way to following Tony Bennett in saying "I left my heart in San Francisco".

San Francisco City Guides Walking Tours cover a number of different aspects of the city with several free tours. Most tours are a little over 1 1/2 hours, no reservations are needed, there is walking, but it is fairly light, and the style is fun and informative.
SF Botanical Gardens are a beautiful part of the city and a free guided walks at (1:30pm daily )adds to the experience. There are also maps of the gardens and redwoods so visitors can tour by themselves.
San Francisco Movie Tours has a bus that takes visitors around the city to spots that have appeared in movies, complete with individual screens to show the clips and a guide to lead the action.
San Francisco Duck Tours take place on original, refurbished World War II Amphibious landing craft that tour over land and water with wacky guides.
San Francisco Shuttle Tours literally go all over the city to show visitors what sets SF apart. Whether your interest lies in wine, nature, or city attractions, the shuttle will take you there.

Most museums, attractions, and history sites offer tours as well. Call the place you are interested in directly and ask what services can be arranged.

There are many different publications and websites that do their best to keep abreast of happenings in San Francisco.
The San Francisco Chronicle offers daily installments of news and information on San Francisco restaurants, events, and happenings.
The San Francisco Examiner is another daily newspaper with an excellent on-line version offering the latest in SF.
Indybay is concerned with the latest political happenings and movements within the Bay area.
The San Francisco Bay Guardian comes out in print weekly and has listings for everything fun in San Fran.
SF Station is an on-line resource for events, lifestyle, and more. The website, www.onlyinsanfrancisco.com/calendar/, has reviews and guides to just about anything going on in San Francisco plus a weekly, continually updated, calendar.
Asian Week offers a comprehensive calendar of events for those interested in Asian-American happenings.

A youth card or student card can offer you a lot of advantages abroad and is a recognition of your status. Two international cards will give you discounts and are essential for those taking a gap year or going backpacking:

What the Cards offer:

You can apply directly online to get the cards (http://www.isiccard.com) or buy asking your University or youth centers.

Many visitors to San Francisco have trouble picking out exactly what they want to experience while in the city. The people, the architecture, the feel of the city is what many people are most interested in. Luckily, by doing some of the touristy things, visitors get a view of what makes the city special and find what they are looking for.

Golden Gate Bridge is a symbol of the city and one of the world's most beautiful bridges. The color of the bridge is actually a dark orange as the approximately nine million people from around the world visit the Bridge each year see. The bridge is best enjoyed by walking across and can be reached by boarding buses #28 or #29. The nearby Fort Point overlook offers an excellent vantage point to view the bridge as well as the beautiful gardens surrounding the viewpoint.

Alcatraz captures the imagination, whether it be in its use to the Native Americans, its days as a prison, or its current situation as a museum.

Golden Gate Park is a haven of all athletic and outdoor activities. Larger than New York's Central Park, the site once consisted of sand dunes. Today, green grass and more than one million trees characterize the park. Deeded to the people in 1870, the park was to prevent the feeling of future overcrowding. This forethought proved invaluable, as 75,000 people now visit the park on an average weekend.

Although the famous Cable Cars are for transportation purposes, the draw many visitors because of their charm and history. San Francisco's many hills, cobblestones, and frequent precipitation proved difficult for horses and carts to handle- thus, the Cable car was born. On August 2, 1873 Andrew Hallidie, the inventor of the cable car, tested his system at the top of Nob Hill. The rest, as they say, is history.

Lombard Street is quintessential San Francisco hillside with immaculately coiffed gardens and eight switchbacks within a block. The street has been called the "crookedest street in the world". At the intersection of Hyde and Lombard, a cable car route provides spectacular views of Alcatraz, Angel Island, Coit Tower, Yerba Buena Island and the Bay Bridge.

This is the largest Chinatown outside of Asia with an impressive gate entering into the neighborhood. The first Chinese immigrants arrived here in 1848 and more flooded in at the discovery of gold. Though their has been racism and prejudice in the past, the city values the Asian community and this section of town is highly touristy.

Coit Tower can be seen in many pictures of the skyline of San Francisco. Perched atop Telegraph Hill, it can be used as a marker when walking around the city. Even better, at the top of tower visitors can get a 360 degree view of the city.

Fisherman's Wharf Merchants Association was founded in 1946 to preserve the history and future of the fisherman and merchants that make the wharf so spectacular. Restaurants, souvenir stores, hotels, and attractions appear all over this are where once there was just fish.

This brief list of highlights can be further investigated (along with many other fabulous attractions within San Francisco) at: www.10best.com/San_Francisco,CA/ or www.onlyinsanfrancisco.com/what_to_do/.

Another option for saving money is to invest in a City Pass. The Pass costs $59 ($44 for ages 5-17) and allows $113 worth of admissions to attractions, cable car rides and bay cruises.

The theatre comes in many mediums in San Francisco. The http://www.san-francisco-theater.com/ offers a guide to broadway plays while the site, www.theatermania.com/san-francisco/shows/ offers a comprehensive listing of shows big and small.

Orpheum Theatre takes its style form a 12th century Spanish palace with magnificent wood doors and ornate sun and stars softly illuminates your seat from above in the elaborate cathedral. This theatre is part of the "Best of Broadway" series.

Golden Gate Theatre For over 80 years this art deco theatre has featured acts from the Marx Brothers, Frank Sinatra, and Hairspray. This theatre is part of the "Best of Broadway" series.

American Conservatory Theatre(ACT) offers classes in acting as well as a variety of performance. Established in 1965,ACT is the largest theater company in the San Francisco Bay Area and employs more than 800 people each season and has entertained 7 million playgoers.

Curran Theatre is the picturesque theatre used for the theater scenes in "All About Eve". Inside, old-fashioned details and crystal chandeliers welcome theatre-goers into another time. This theatre is part of the "Best of Broadway" series.

To find discounted tickets, TIX Bay Area((415) 433-7827) on Union Square has a half-price ticket booth that has day-of-tickets to performances at many of the large and smaller houses.

San Franciscans are proud of their city and its history and the plethora of museums focused on different aspects of the city reflect this:

The Virtual Museum of the City of San Francisco: The museum covers great historical events within the city such as the 1906 earthquake, California Gold Rush, and internment of the Japanese during World War II.

San Francisco Maritime National Historical Park: This museum focuses on the implications water and trade have had on San Francisco. Visitors can find the museum in Fisherman's Wharf where they can stand on the stern of Balclutha and look out at the ocean.

Museum of Craft and Folk Art: This is the only folk art museum in Northern California and it offers exhibitions of traditional and contemporary folk art and crafts from around the world.

San Francisco Museum of Modern Art: This is the first museum on the West Coast devoted solely to 20th-century art. In the center of the Yerba Buena Gardens, this is a hotbed of artistic ventures.

The Asian Art Museum: One of the largest museums in the Western world devoted exclusively to Asian art, this museum allows visitors to explore 6,000 years of history.

The Mexican Museum: In a nod to the areas former rulers and current largest minority, this museum holds over 12,000 spectacular objects representing thousands of years of Mexican art and culture within the Americas.

Cable Car Museum: For the city with the only operating cable car system in the world, this free museum offers a hands-on exhibition in the city's cable car barn and powerhouse.

The Exploratorium: Perfect for children and adults, this playful museum is experimental and hands-on.

Believing that the arts should be for everyone, no matter their financial circumstances, the city's museums host many free days. Visitors don't even need to step into a museum to find art, the Public Art division ensures that a percentage of new construction is allocated to integrating artwork's into the site. The downtown landscape is dotted with artwork and even police and fire stations, bus stops, and plazas offer a local artist's work. To find out more about cultural studies and art in San Francisco, contact: San Francisco Arts Commission, Film Arts Foundation, or Artspan.

February's Chinese Spring Festival is one of the events to start off the New Year Exhibitions with crafts, demonstrations, New Year food tasting's, performances of lion dances, martial arts, and dancing. June offers the LGBT Pride celebrations which is actually a two-day festival that travels along Market Street with shops, concerts, and one fabulous parade. The summer continues with 4th of July celebrations punctuated by fireworks at the Waterfront Festival. The free Fillmore Jazz Festival and North Beach Jazz Festival liven up the summer streets. The San Francisco Jewish Film Festival, also in July, first and oldest Jewish film festival in the world. In August, there is the SF Shakespeare Festival. September brings the Fringe Festival, for experimental theatre and cutting-edge performances. The local chocolate also has its own festival in September, the Ghirardelli Chocolate Festival. The Castro light up in October with its own festival. The Castro Street Fair offers goods and entertainment to entertain all crowds. Transitioning from summer to fall is the Chinatown Night Market with varied wares for sale. Although a long way from Munich, the Oktoberfest By The Bay lives up beer in pretzels and everyone pretends to be German. The Holiday season is celebrated with the Annual Tree Lighting Ceremony at Ghirardelli Square, Great Dickens Christmas Fair, and Holiday Festival of Lights in December.

Do you have comments or personal information to communicate about this article? Add your comment.
Find links about entertainment / theatre, opera, museum in San Francisco and a lot more in The links of expatriation.
Find more definitions and general answers on expatriation issues in the Expat FAQ (Frequently Asked Questions).
Read more...


Go to the Forum to talk more about theatre, opera, museum in San Francisco, entertainment.
Search for members in the Usa