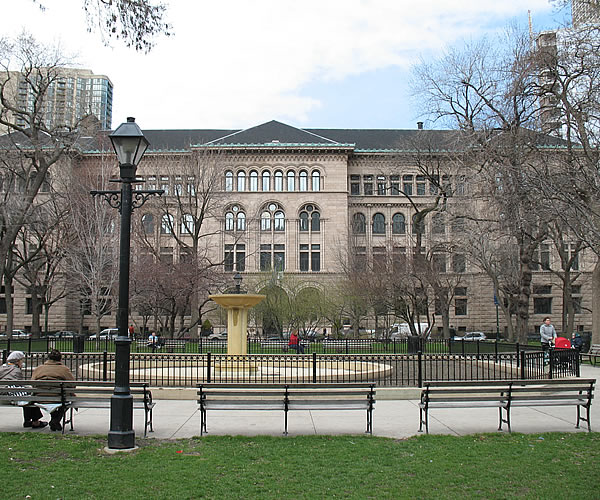 Chicago is one of the leading city for conventions in America. Numerous facilities house a variety of events across the city. The city's main convention center is McCormick Place right on the water. It is the third largest convention center in the world. For listings of events:
http://www.chicagotraveler.com/chicago-conventions-trade-shows-conferences.htm.

A typical work week includes Monday to Friday from 9:00 AM to 5:00 PM making up a typical 40-hour workweek. However, this can very greatly from job to job and some jobs require workers on "swing shift" (work at night) or for employees to regularly come in on the weekend. Many professional workers are expected to put in much longer hours exceeding 60 hours a week.

Most companies offer 2 weeks of paid vacation time a year. Employees may also call in sick, but this may be taken out of vacation time. There are several mandatory non-work days, usually connected to the weekend to make a "3 day weekend". This includes New Year's Day (Jan. 1), Independence Day (July 4), Veterans' Day (Nov. 11), and Christmas (Dec. 25). In addition, most companies offer a winter break around the end of December to New Years and two or three extra days at Thanksgiving.

Minimum wage in Illinois is currently $7.50, but this will raise to $7.75 in July 2008. Under most circumstances, wage earners and lower-level employees may be legally required by an employer to work more than forty hours in a week; however, they are paid extra for the additional work. Many salaried workers and commission-paid sales staff are not covered by overtime laws. These are generally called "exempt" positions because they are exempt from the federal and state laws which mandate extra pay for extra time worked. Generally, workers are paid time-and-a-half, or 1.5 times the worker's base wage, for each hour of work past forty.

Most jobs are advertised, answered by a group of applicants, interviews are held, and the most appropriate candidate is offered the job. At this time, the candidate is usually offered a contract for a specified wage per hour or salary. Other rules like an expectation of how the employee should be paid, dress, and generally performed are also outlined. It is vital to understand and be able to commit to all aspects of the contract before signing.

Rules of termination are also usually stated in the contract and often dictate that an employee must give at least two weeks notice if they intend to quit. An employer must similarly give notice before firing the employee, although they do not necessarily need to have a reason, especially in the first three months of employment which is frequently considered a probation period.

Do you have comments or personal information to communicate about this article? Add your comment.
Find links about at work / work usage in Chicago and a lot more in The links of expatriation.
Find more definitions and general answers on expatriation issues in the Expat FAQ (Frequently Asked Questions).
Read more...


Go to the Forum to talk more about work usage in Chicago, at work.
Search for members in the Usa