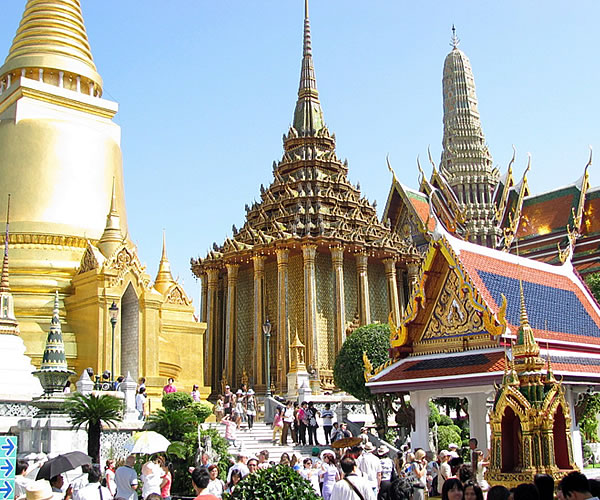 The theatre is becoming increasingly popular in Thailand with performances being given both in Thai and English. Recently, international shows Miss Saigon, Swan Lake and Phantom of the Opera have all been performed in Thailand.

Theatres like the Patravadi Theatre (Address: 69/1 Soi Wat Rakang. Take the Chao Phraya Express Boat (North bound) to Wang Lang (Siriraj) Pier. On exiting the pier, turn left and walk 600 metres to the theatre) are premier establishments for Theatre in Bangkok. Established in 1992 and situated on the banks of the Chao Phraya River, the Patravadi Theatre complex is a centre for hopeful performing artists and a stage for enjoying Thai classical and modern dances. Known as being home to the best modern contemporary dance performance in Bangkok, Patravadi fuses contemporary and classical Thai dance movements to craft a unique angle on an otherwise traditional performance.

Siam Niramit (Address: Tiamruammit Road, opposite Thailand Cultural Centre; MRT: Thailand Cultural Centre Station) tells the story of Thailand's seven centuries, featuring more than 700 years of culture, customs and traditions. Set in the world highest stage, the show is told through three sections: Journey Back into History, Journey Beyond Imagination: The Three Realms and Journey Through Joyous Festivals. Renowned for being one of the largest stage productions in the world, Siam Niramit is a spectacular show not to be missed.

Other Theatres and Performing Arts Centres in Bangkok

As with films at the cinema, the Thai Royal Anthem is played out of respect for the King and the Royal Family before each performance. It is important you remember to stand at the appropriate time to show your respect.

Thailand's ladyboys or katoeys are some of the most beautiful transvestites you will see and are wholly embraced by a highly liberal Thai society. These cabaret-like shows pay tribute to anything from the glamour of Hollywood to mythical creatures and legends of the Orient and feature magnificent extravaganza-type sets and costumes. A ladyboy show promises an evening of sophisticated and pleasant entertainment for the whole family. Calypso Cabaret as Asiatique Nightmarket is the most famous and popular show.

The Bangkok Traditional Puppet Show (Address: Suan Lum Night Bazaar, 1875 Rama IV Road, Lumpini, Pathumwan; Tel. 66 (0) 2252 9683) at Aksra Theatre is a much loved performance. Classic folk tales are told through the traditional art of puppetry. Three puppeteers dressed in black control the legs, arms and head of each puppet and both the puppets and puppeteers dance along with the live orchestra, which merges Thai and European instruments.

When you think of Thailand and Bangkok, opera is not perhaps the automatic thing you would think of, but the Bangkok Opera Company was founded in 2001 as a production company to mount Madana, the first full-length grand opera by a Thai composer. Founded and inspired by Thai author SP Somtow, who adapts some operas himself, Bangkok Opera Company continued to grow and expand both in physical size but also with their choice of performances. This is Thailand's first Western opera, fusing Western styles with Thai stories, or Thai variations on classics such as Turandot.

In 2002, the Bangkok Opera company performed a series of productions with Purcell's Dido and Aeneas, and then progressed to grander and more large-scale works such as Mae Nakk, The Magi Flute and Turandot. At the end of 2005, the Bangkok Opera announced its first complete season and commenced a five year project to perform the complete Wagner's Ring Cycle in Bangkok.

Its resident orchestra is the Siam Philharmonic Orchestra and its resident chorus is the Orpheus Choir of Bangkok.

Opened in 2008, the Siam Opera (Address: Siam Paragon Shopping Complex, Th Rama 1; 66 (0) 2690 1000) is the operatic division of the Bangkok Opera Foundation and it is Thailand's flagship opera company. Known as Bangkok's most up-to-the-minute and efficient theatre, it hosts performances ranging from traditional Thai dance to opera via symphony and musicals.

Founded 30 years ago, the Bangkok Symphony Orchestra (BSO) has firmly established itself as Thailand's best orchestral company. The BSO is a non-profit organisation and is one of the very few symphony orchestras in the world that receives no public funding and relies purely on ticket sales and the kindness of sponsors, donors, endowments and other fund raising activities for its finances.

The BSO chose the works of Beethoven to be their first performance on 26 November 1982, and since then has continued to operate under the patronage of the Bangkok Symphony Orchestra Foundation and is honoured to have the benefit of the Royal Patronage of the Crown Prince of Thailand, His Royal Highness Prince Maha Vajiralongkorn. Each season, the orchestra performs a wide catalogue of classical music, and concerts of popular music featuring musical theatre, films and television. Concert programmes also feature Thai classical and contemporary music. Special concerts are given in schools, university campuses and in city parks, such as Lumpini Park, during Bangkok's cooler winter months.

The 70 professional Thai musicians of the BSO have performed under the baton of many internationally-renowned guest conductors including Loris Tjeknavorian, Takuo Yuasa, Massimo Paris, Paul Nadler and Zheng Xiaoying, famous guest solo artists such as Peter Donohoe, Anthony Camden and Dang Thai Son have also all performed.

Thailand Philharmonic Orchestra and the Goethe-Institute

The Thailand Philharmonic Orchestra and the Goethe-Institute orchestra is situated at the Mahidol University under the patronage of the Royal Thai Government. It promotes arts, culture and music in Thailand and the musicians strive for national and international status.

The Siam Philharmonic Orchestra was founded in 2002 under the name "Mifa Sinfonietta". It has since been developed from a small chamber ensemble to the current classical style to Thailand's classical musicians. The works of Mozart and Haydn are regularly performed.

Located in the grounds of the 18th Century Wang Na Palace, The Bangkok National Museum houses the largest collection of Thai art and artifacts. Opened by King Rama V to exhibit the gifts bestowed to him by his father, it holds a fascinating collection of decorative arts, Chinese weapons, gold treasures, precious stones, Khon masks, puppets, ceramics, clothing and textiles, woodcarving and traditional musical instruments from around Southeast Asia.

American Jim Thompson dedicated over 30 years to making the Thai silk industry famous worldwide. He lived in a complex of teak villa, located close to a khlong. At the height of his success Jim Thompson mysteriously disappeared and conspiracy theories are still banded around today about what might have happened to him. However his legacy continues and his teak home is now filled with his treasures, art, antiques and of course the Thai silk he became so well known for.

Travelling by water used to be the main method of transportation around Bangkok. This museum is home to eight of Thailand's most special vessels: The Royal Barges. These boats only make an appearance in the most special ceremonies - they have only been used 16 times in the last 65 years. Each carved from teak and finished with magnificent and majestic creatures, this is an opportunity to see the otherwise rarely seen barges.

Just like its counterparts in London and abroad, Madame Tussauds is home to ax figures in the like of royalty and Hollywood's finest. Located in the Siam Discovery Centre and with 10 exhibition rooms in total, this is your chance to be snapped with Barack Obama, Leonardo DiCaprio, Brad Pitt, Princess Diana, and even the Thai Royal Family.

Founded by Khunying Tongkorn Chandavimol in 1956, she initially studied doll-making in Japan. Her dolls are based on Thai mythology and include a collection of over 400 dolls.

Incorrect Info for Suan Lum
Hey, just wanted to let you know that Suam Lum closed in 2011, but it still appears on maps, confusing everyone. Thanks!
Do you have comments or personal information to communicate about this article? Add your comment.
Find links about entertainment / theatre, opera, museum in Bangkok and a lot more in The links of expatriation.
Find more definitions and general answers on expatriation issues in the Expat FAQ (Frequently Asked Questions).
Read more...


Go to the Forum to talk more about theatre, opera, museum in Bangkok, entertainment.
Search for members in Thailand