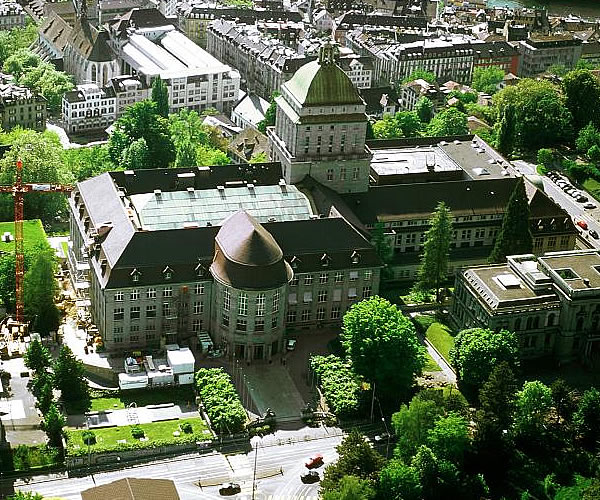 There are four national languages in Switzerland: German, French, Italian and Romansh. All four languages have equal rights, but in practice the use of Romansh is fairly isolated. German, French and Italian enjoy equal status in Parliament, the federal administration and the army. The official language used by the government and in most publications is German, while the main spoken language is Zurich German (Swiss German Züritüütsch), which is a dialect of Alemannic. English and French are also widely spoken and often used in official publications and announcements alongside German.

The population is made up of: (Swiss-)German 63.9 percent, French 19.5 percent, Italian 6.6 percent, Romansh 0.5 percent and others 9.5 percent. Cantonal school regulations require that every child learn a second national language starting in primary school. English is increasingly taught at an early age, sometimes taking priority over a second national language. People who move to the country may need to learn one or more local languages depending on where they settle. Berne, Fribourg and Valais are officially bilingual.

Swiss German, or Züritüütsch (in Swiss German) or Schwytzerduetsch (High German) or Suisse-Allemand (French), is the language spoken in the German-speaking areas. It is actually not a single language but a wide variety of local accents and dialects. It sounds quite different from the German spoken outside of Switzerland. Dialects are so varied and different,even some Swiss have problems communicating with people from other regions. German Hochdeutsch ("high German") is taught in school and people will often revert to this when speaking with German-speaking foreigners. This is also the language used in written communication as there is not an official national grammar, or even an agreed upon spelling for "Schwytzerduetsch".

French is spoken in the cantons of Geneva, Jura, Neuchatel and Vaud, as well as in parts of the cantons of Bern, Fribourg and Valais. The French-speaking area of Switzerland is called Romandie. There are different dialects especially in rural districts, but communication between areas is less problematic than Swiss German. There is also a greater similarity between French spoken in western Switzerland and the French spoken in France.

Italian is spoken in the southern valleys up to the St. Gotthard, Lukmanier, San Bernardino, Maloja, and Bernina passes. This region comprises the whole of the canton of Ticino and the valleys of Misox/Calanca, Bergell/Bregaglia and Poschiavo in the canton of Graubuenden (Grisons). It is mostly spoken with a Lombardy accent.

Originally conquered by the Romans, this area was latinised by the original inhabitants. Being isolated by the numerous valleys, there were five distinguishable idioms besides Italian in three southern valleys. The language has been declared an official language, but it continues to erode. There have been efforts to create a single written language known as Rumantsch Grischun and maintain the language.

With the plethora of languages used in the country, there are many language schools. There are language schools (Sprachschule or academie de langues)or German language courses at Volkshochschulen or universites populaires). There are full-time and part-time courses, as well as residential courses (where they offer accommodation). Most offer sample lessons or let you sit-in for free before signing up. Shop around before choosing.

Private lessons are another option. More expensive than language courses, these can be very effective. Expect to pay between 10-20 euro per hour depending on the tutor's qualifications and experience.

You can search for opportunities in a local newspapers, on message boards at pubs, copy centers, supermarkets, universities, and cafes, or on online boards such as EasyExpat's classifieds or Job Listings for tutors and classes. You can also find friends on the forum to work on language exchange.

An exchange partner (Sprachaustausch, Tandem, echange de langues) is an excellent resource for practicing a new language with a native speaker. As an added bonus, language exchange partners can help you understand the culture of the area and inform you of local happenings. Questions about gift giving, festivals, nightlife, and greetings can be addressed without worry. In the best case sceneries, an exchange partner is not only your ambassador, but a friend.

Do you have comments or personal information to communicate about this article? Add your comment.
Find links about education / language courses in Zurich and a lot more in The links of expatriation.
Find more definitions and general answers on expatriation issues in the Expat FAQ (Frequently Asked Questions).
Read more...


Go to the Forum to talk more about language courses in Zurich, education.
Search for members in Switzerland