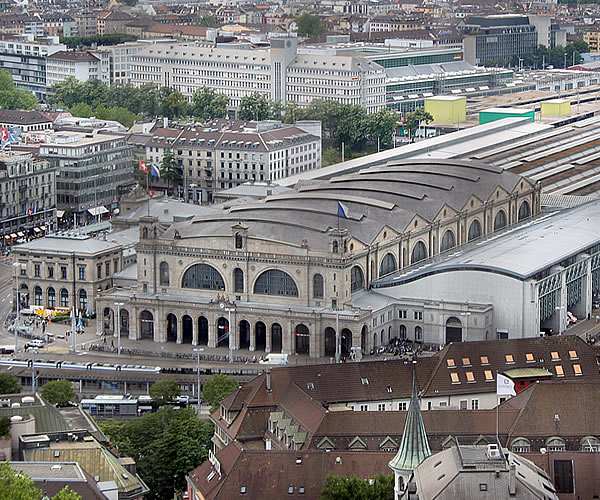 Switzerland is not part of the European Union and the currency is the Swiss franc (also known as the Franken or franco). Banknotes are found in denominations of 10 (yellow), 20 (red), 50 (green), 100 (blue), 200 (brown), and 1000 (purple) Francs. They are all the same width and contain a variety of security features. Coins are issued in 5 centime (brass, rare), 10 centime, 20 centime, 1/2 Franc, 1 Franc, 2 Franc, and 5 Franc (all silver colored) denominations. One centime coins are no longer legal tender, but may be exchanged until 2027 for face value. Two centime coins have not been legal tender since the 1970's and are worthless.

Switzerland is more cash-oriented than most other European countries. Price-labels usually contain prices both in francs and in Euro. Some supermarkets, restaurants, ticket machines, and large hotels accept Euro and will give you change in Swiss Francs or in Euro if they have it in cash. Most exchange-rates comply with the official rate, but if it differs you will be notified in advance.

ATMs are easy to find throughout Switzerland in both cities and small towns. ATMs are the easiest and best way to get cash away from home. Also referred to as a "cash machine" or a "cashpoint", the usual fee for a withdrawal at a "foreign" bank's ATM is CHF 2. Sometimes, banks provide the cardholder with usually 10, 12 or 24 free withdrawals, especially if the bank is a small one, with few ATMs.

Be sure you know your personal identification number (PIN) and your daily withdrawal limit before you depart. You should also notify your bank of travel plans so they are aware of where your card will be used and do not put a stop on it for suspicious activity. Also consult with your bank to find out if they have any partnerships with the country you are visiting. Make sure you understand the fees and regulations in your contract to avoid excessive fees. Remember to make a record of your credit card number and the emergency phone number for cancelling your card, should you lose it.

Though cash is still necessary for many purchases, especially in small stores, cards can be used in more and more places. Note that some establishments might not accept your credit card unless you have a computer chip imbedded in it. More and more places in Switzerland and Europe are moving from the magnetic strip credit card to the new system of Chip and PIN.

It is also possible to withdraw cash advances from your credit cards at banks or ATMs, provided you know your PIN. however, you will pay interest from the moment of your withdrawal. Also, note that many banks now assess a 1 to 3 percent "transaction fee" on all charges you incur abroad (whether you're using the local currency or your native currency).

Swiss banks, as well as the post office (which handles some financial transactions) use an electronic payments system known as Swiss Interbank Clearing (SIC). The system is supervised by the Swiss National Bank and is operated via a joint venture.

Most currencies can easily be exchanged for euros anywhere in the world. Moneychangers are frequently advertised at entrance points and in the downtown area. Make sure you understand the rates before committing. Changers at international airports are usually the best deal.

Note that the best rates can usually be found by taking money from an ATM. This depends on your home bank, but this is usually the safest and cheapest way to withdraw money.

Electronic money transfers to another country are no longer as difficult as they used to be. Just about every bank in the big cities offer this service. Account holders should use the IBAN number and swift code to transfer funds internationally. All accounts in the EU are allocated with these numbers aimed at facilitating cross-border payments. These are vital for employees based in a different country from their employers. Service charges are variable (depends on the sending and receiving bank).

Transfers from the same bank normally take effect on the same day; from other banks this process can take up to five working days. Transfers from abroad require the international IBAN code, may take longer and incur additional costs.

The easiest way to complete a transfer is if you have a dual-currency account, such as the connection between Deutsche bank and Bank of America. Electronic transfers to dual currency accounts incur no or very low fees.

Swiss neutrality and national sovereignty has allowed the country to have a thriving banking sector. Swiss banks are legendary for the privacy. The Banking Law of 1934 codified the rules of secrecy and criminalizes violation of it. An estimated one-third of all funds held outside the country of origin (sometimes called "offshore" funds) are kept in Switzerland.

All banks in Switzerland are regulated by Swiss Financial Market Supervisory Authority (FINMA). Most banks offer similar quality services and online banking is standard. However, do shop around to find the best fit for you with agreeable fees.

There are many levels of bank accounts. For Swiss residents:
Current accounts which are useful for day-to-day management of your money, but pay little interest.
Salary accounts pay slightly more interest than current accounts, but without check writing capabilities and/or some other services
Savings accounts offer higher interest, but are not very useful for many transactions.

Non-residents of Switzerland who want to open a Swiss bank account face little restrictions besides being at least 18 years old. However, the more investment options and guidance you want, the higher the required balance. Account can be in almost any currency, although most choose the Swiss franc, U.S. dollar, Euro or Sterling. There is often no minimum balance required, however you've made deposits there is a minimum balance you have to maintain which varies from bank to bank and by type of account.

It's easiest to open your account in person, but you may be able to open an account at some banks by mail or fax. It is not necessary to make an appointment before opening a bank account. You will also need to prove where your money is coming from with certified documents because of Swiss anti-money-laundering laws.

Any requested credit or debit cards can be expected to arrive after a week to ten days.

Numbered Accounts have numbers associated with them (or sometimes a code word) rather than a name. Contrary to popular belief, there is no such thing as an "anonymous" Swiss bank account. Even though Swiss bankers must maintain silence regarding their clients and client accounts, there are always records of ownership.

Numbered accounts are more difficult to open and require your presence at the bank. They typically require an initial deposit of at least $100,000 and cost about $300 per year or more to maintain.

There are over 300 banks in Switzerland. These range from large international banks to regional.
National: National banks UBS and Credit Suisse dominate the Swiss banking market.
Regional: Switzerland has many small universal banks that focus on lending and traditional deposit accounts. By restricting their business to one region they gain customer proximity, become more knowledgeable with local news and events and also with regional business cycles.
Cantonal: Switzerland is made up of 26 official "cantons," or states. Currently, there are 24 Cantonal banks. Cantonal banks are either 100 percent-owned or majority-owned by the cantons and must be managed in accordance with proper business principles. Their history goes back more than a hundred years, offering low-cost loans and secure investment opportunities since the 19th century. All the Cantonal Banks account for around 30 percent of banking business in Switzerland and have a combined balance sheet total of more than 300 billion Swiss francs.
Private: Switzerland's private banks are individually owned, have collective and limited partnerships and are among the oldest banks in Switzerland. They focus primarily on asset management for private clients and do not publicly offer to accept savings deposits. Foreign: Switzerland also has several foreign-controlled banks, meaning over half of the company's votes are held by foreigners with qualified interests. Ownership is predominantly held by nations of the EU (over 50 percent), followed by Japanese (around 20 percent).
Investigate them to find the bank that has charges, fees, and services that work best for you.

UBS is the largest Swiss bank. Together with Credit Suisse it accounts for over 50 percent of all deposits in Switzerland. It has extensive branch networks throughout the country and most international centers. Credit Suisse is the second largest bank in Switzerland and because of it's size and importance, it is subject to an extra degree of supervision from the Federal Banking Commission.

Swiss National Bank (SNB) is an Aktiengesellschaft under special regulations. About 55 percent of its shares are owned by public institutions like cantons and cantonal banks.[citation needed] The remaining shares are traded on the stock market. They are mostly owned by private individuals. Raiffeisen Group has over 1,200 locations throughout the country and the highest number of branches. They are affiliated with the Swiss Union, which is responsible for the Group's risk management, coordination of the Group's activities, and framework for each individual banks' business activities.

Do you have comments or personal information to communicate about this article? Add your comment.
Find links about practical life / bank services in Zurich and a lot more in The links of expatriation.
Find more definitions and general answers on expatriation issues in the Expat FAQ (Frequently Asked Questions).
Read more...


Go to the Forum to talk more about bank services in Zurich, practical life.
Search for members in Switzerland