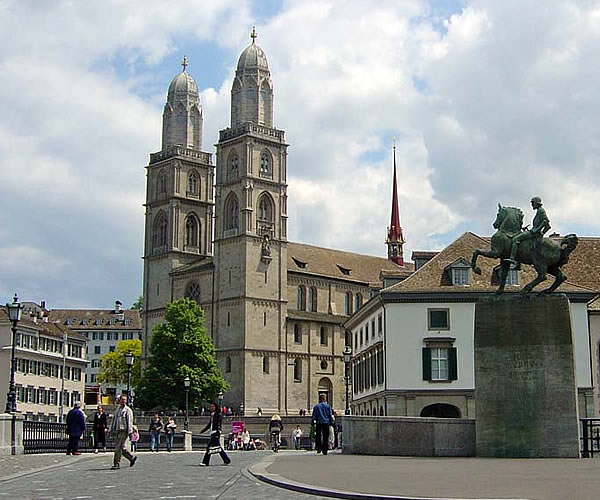 Tourism and Sightseeing in Zurich

Local tourist offices provide information about the city, maps, hotel and hostel bookings, information about getting around on public transport, tours, and how to find the best deals in the city. The official site, http://www.Zurich.com/en/Visitor.html, offers recommendations on accommodations, gastronomy, tours, sights, and information.

Most of Zurich's sights are located within the area on either side of the Limmat river, between the Main railway station and Lake Zurich. The Old Town area is known as the Altstadtbummel and is a must-visit.

Schloss Kyburg
This castle stands above the River Limmat, offering gorgeous views across the Zurich cityscape. It is the best-preserved castle in north-eastern Switzerland. The castle is about 900 years old and offers themed exhibitions.

St. Peterhofstatt (St. Peter's Church)
This church has the largest clock face in Europe at 9 meters (30 feet). It is the most visited of all Zurich's landmarks.

Kaferberg Mountain
One of the draws of Switzerland is the beautiful outdoors. Kaferberg mountain is situated within Kreis 10 and is one of the city's biggest natural landmarks. There are trails and vantage points, as well as outdoor tables to enjoy the scenery.

Grossmunster
Near Lake Zurich, this old Romanesque church is known as the "Great Minster" and was built around 820. It was declared by Charlemagne as an imperial church and is a symbol of reformed Zurich. Up the narrow and steep stairs, there is a great view of Zurich.

Fraumunster
"Our Lady's Minster" is the first church built before 874. During 2004, it was fully renovated, allowing for a 360 degree panoramic view of Zurich.

Chinese Garden
The Chinese Garden was a gift from Zurich's Chinese partner town Kunming. One of the features is "Three Friends in Winter" – a pine, bamboo and winter cherry.

Uetliberg
Located to the west of the city, it is at an altitude of 813 meters (2,667 ft) and is the highest hill. There is a 360 degree view from a tall viewing tower. This is also the start of the planetenweg (planetary walk), an 8 mile walk along the ridge with models of the planets along the way.

Rhine Falls
This is the largest waterfall in Europe. A 45 min train ride away from the city, it is a magnificent sight. There is also an adventure park and other activities.

Roman Baths
Offering a glimpse of Swiss history, the ancient Roman baths originated back to the 3rd century AD. However, they were only discovered recently, in the 1980s. They can be viewed around the clock, but only through a protective iron grating.

Strandbad Mythenquai
Located alongside Lake Zurich, the City Beach Resorts comprise a long stretch of sandy beach. There is a diving platform and children's playground against the backdrop of the Alps.

Urania Sternwarte
Switzerland's historic observatory is just over 100 years old. There is an enormous telescope with multi-language shows.

Zoological Garden
One of the best-known zoos in Europe, Zurich's Zoological Garden contains some 2,200 animals of about 260 species. Founded in the 1929s there are snow leopards, India lions, clouded leopards, Amur leopards, otters and pandas in the zoo.

Botanical Garden
The Botanical Garden houses about 15,000 species of plants and trees and contains as many as three million plants. There are rare species from south western Africa and New Caledonia.

There is a range of tours with different focuses, price points, and modes of transportation. Many inexpensive tours start at the larger hostels, and most accommodations will have pamphlets.

Tram Tours - The quickest and most convenient way to get acquainted with Zurich is with a 2-hour trolley tour. A headset delivers running commentary in seven languages.

Grey Line Tours - A variety of tours that explore the sights of the city through a variety of modes of travel.

Circle Tour - Tourists are transported around the city in a traditional trolley bus, passing many attractions and enjoying spectacular views across the surrounding towns, mountains and Lake Zurich. Or you can take a boat trips along the Limmat River, a meandering waterway spanned by a series of bridges, before ultimately reaching the lake.

Easter Celebrations - Religious ceremonies take place at many of the city's churches.

Sechselaeuten - The guilds of Zurich celebrate their traditional spring festival with the burning of the snow man (Boogg). A procession of several hundreds of people with historical guild costumes and horses takes place in the center of the town.

Labor Day/May Day - This holiday for labor tends to bring out some playful public resistance and transportation can be difficult as the trams stop running halfway through the day. There may be minor violent outbreaks and damages to cars after dark.

Verein Gay Pride Christopher Street Day - One of Switzerland's biggest and most significant gay pride events, with a parade along the streets surrounding the Helvetiaplatz and many flamboyant costumes.

Swiss National Day - On August 1st, celebrations are carried out in most Swiss cities. There are fireworks, both public and private.

Street Parade - One of the largest and most popular annual events in Zurich this is a large techno and dance music festival. It takes place along Lake Zurich, normally occurs on the second Saturday in August. There are over a million participants.

Zurich Film Festival - One of the most important international film festivals, the festival takes place over the course of 11 days. It attracts both stars and popular international productions.

Circus Monti - Circus events at the Kasernenareal, with clowns, trapeze artists and many other circus favorites.

Jazznojazz - Blues and jazz are enjoyed at various central venues and run each year by the All Blues Konzert organization.

Expovina -One of the largest wine tasting events held on the Buerkliplatz. Features literally thousands of wines from throughout the world.

Lichterschwimmen on the Limmat - late December, visitors gather at the Stadthausquai, alongside the River Limmat, to witness the lighting of the candles and enjoy the hot Swiss food.

Santa Claus Parade (Samichlaus-Umzug) - Dates back to the middle of the 20th century. People dress as Santa Claus, parading down the streets of Seefeld in aid of charity.

Silvesterzauber der Zurcher Hoteliers - On December 31st, street parties occur throughout the city. They draw crowds of more than 100,000 with food stands and fireworks.

Do you have comments or personal information to communicate about this article? Add your comment.
Find links about entertainment / tourism and sightseeing in Zurich and a lot more in The links of expatriation.
Find more definitions and general answers on expatriation issues in the Expat FAQ (Frequently Asked Questions).
Read more...


Go to the Forum to talk more about tourism and sightseeing in Zurich, entertainment.
Search for members in Switzerland