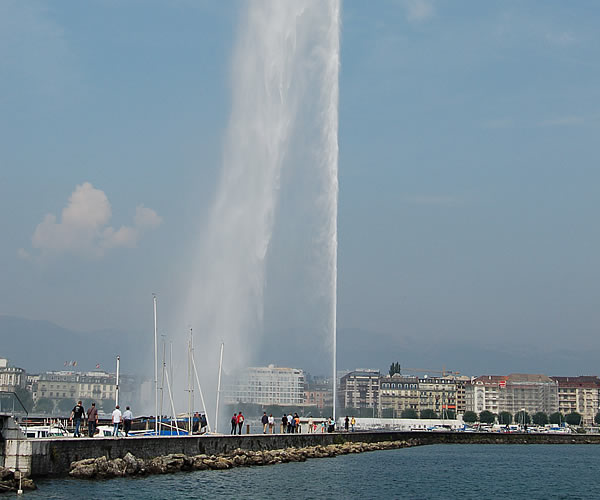 Geneva is located 373 m above Mean Sea Level between the Alps and Jura mountains, to the south-west extrimity of Switzerland and beside Lake Geneva (French: Lac Léman, but the Genevois call it Lac de Genève). It's the second most populated city of the country with 185 000 inhabitants (foreigners make up about 45% of the population - with more than 180 nationalities, it is an example of an international city). Until 1870, Geneva was actually the most populated of the Swiss cities, but has been overpassed by Zurich.

Geneva is part of the Canton of Geneva, the smallest: 282 km2. It is an enclave surrounded by French territories (department of Haute-Savoie in the south, Ain in the north). Its border is 107.5 kilometres long but only 4.5km long with the Swiss confederation. The link with Switzerland is assured by a thin land linking Geneva to the Canton of Vaud, along the Lake Geneva (the small part of the lake, that is part of Geneva, is called Petit lac).

Switzerland is a mountainous country, with 3 natural chains: Alps, Middleland (or Mittelland) and the Juras. Numerous and wide valleys run within this area of rough climate, carved by the icy periods thousand years ago. The Mittelland, that covers one third of the territory, is a region with hills and fertile land, with loads of lakes, as the Lake of Geneva.

The country has several rivers, amongst them are Rhin and Rhone. The demographic growth of the country (7.5 million inhabitants) is low, partly due to the immigration policy. However, the population is relativly dense, and concentrated in the Mittelland region , where you find the biggest cities: Zürich, Geneva, Lausanne and Berne (the capital).

Do you have comments or personal information to communicate about this article? Add your comment.
Find links about overview / geography of Geneva and a lot more in The links of expatriation.
Find more definitions and general answers on expatriation issues in the Expat FAQ (Frequently Asked Questions).
Read more...


Go to the Forum to talk more about geography of Geneva, overview.
Search for members in Switzerland