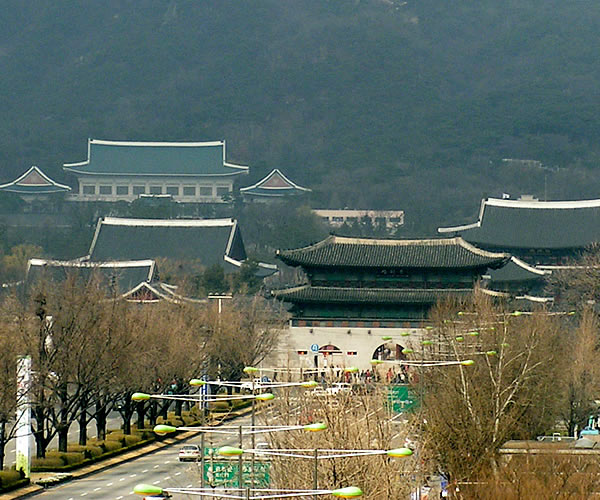 South Korea is located to the east of China at the southern tip of the Korean Peninsula which juts out from Asian land mass. The only country with a land border to South Korea is North Korea. South Korea has 2,413 km of coast line running along three seas. To the west is the Yellow Sea, to the south is the East China Sea, and to the east is the Sea of Japan (East Sea). South Korea's land mass covers 100,032 square kilometres, which makes it a little bigger than Portugal. The original border between North and South Korea was the thirty-eighth parallel of latitude. After the Korean War, the Korean Demilitarized Zone (DMZ) formed the boundary between the two. The DMZ is a heavily guarded, 4,000-meter-wide strip of land that runs from the east to the west coasts for a distance of 241 kilometres.

Since it occupies a central position in East Asia and there are no sizeable land or sea barriers along its borders the Korean Peninsula has long been a cultural bridge between China and Japan. Indeed Korea contributed greatly to the development of Japan by transmitting Chinese Confucianism and Buddhist culture, art, and religion.

South Korea is a mountainous country but unlike Japan or the northern provinces of China is geologically stable: there are no active volcanoes and there have been no strong earthquakes in modern times.

As in most developed countries, Korea’s ancient forests have been progressively cut down over the centuries. The disappearance of the forests has been a major cause of soil erosion and flooding. However thanks to successful reforestation programs and the declining use of firewood as a source of energy the situation is slowly being remedied.

South Korea has a temperate climate with four distinct seasons. South Korea is less vulnerable to typhoons than the rest if Asia. Typhoons usually pass over South Korea in late summer, especially in August, and bring torrential rains. Flooding occasionally causes considerable damage however. Indeed in September 1984, record floods caused the deaths of 190 people and left 200,000 homeless. This disaster prompted the North Korean government to make an unprecedented offer of humanitarian aid. Autumn is the best time to visit Seoul since the temperatures are mild and the sky is clear.

Seoul is the capital of South Korea and is one of the most highly populated cities in the world, located in the north-western part of the country on the Han River. With the establishment of South Korea (the Republic of Korea) in 1948 it became the capital, except for a short time during the Korean War.

The traditional heart of Seoul is the old Joseon Dynasty city, which is now the downtown area, where most palaces, government offices, corporate headquarters, hotels and traditional markets are located. To the north of downtown is Bukhan Mountain, and to the south is the smaller Namsan. Across the Han River are the newer and wealthier areas of Gangnam-gu and surrounding neighbourhoods. Yeouido is a large island in the middle of the Han River and is home to the National Assembly, the major broadcasting studios, and a number of large office buildings, as well as the world's largest Presbyterian church.

If you want to move money abroad, from South Korea or to South Korea for example, Fexco provides efficient and secure global bank to bank transfers and bespoke payment solutions for both business and personal clients.

Do you have comments or personal information to communicate about this article? Add your comment.
Find links about overview / geography of Seoul and a lot more in The links of expatriation.
Find more definitions and general answers on expatriation issues in the Expat FAQ (Frequently Asked Questions).
Read more...


Go to the Forum to talk more about geography of Seoul, overview.
Search for members in South Korea