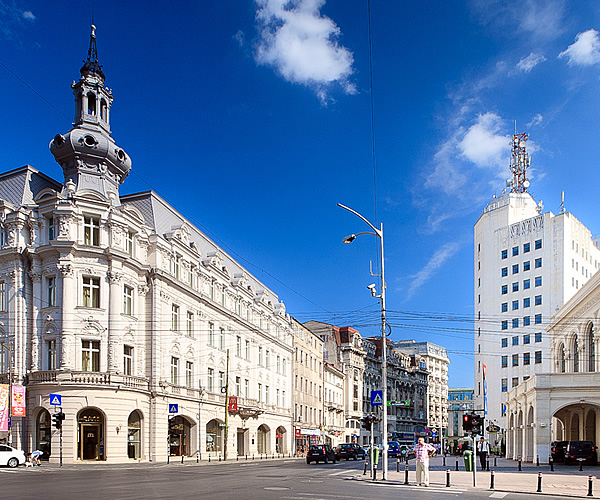 Tourism and Sightseeing in Bucharest

The country's official tourism site is Romania.travel, and for Bucharest it is See Bucharest.

While not particularly rich in landmarks, Bucharest offers a variety of sightseeing options.

Herăstrău is the biggest park in Bucharest, offering attractions such as tennis courts, a boat renting complex and terraces open during from spring-time to early autumn. Bordered by 19th century villas built in the neo-classical style, the area around it is one of the most beautiful in the entire city. The park has no opening and closing hours, but for safety reasons it is recommended to visit it during day-time.

Opened in 1860, it is the oldest public garden in Bucharest, and was designed by the German landscape architect Carl Meyer. The garden is a harmonious blend of lush green vegetation and historical pavilions, and it offers a playground for children, a chess board area, boat rentals and a rose garden.

A near-copy of the Triumph Arch in Paris, this Romanian replica was built in 1936 following the plans drawn by the architect Petre Antonescu. Visitors can admire the Arch from the outside and stroll around the surrounding area, filled with gorgeous historical houses dating from the 1930's.

This beautiful passage linking the busy Calea Victoriei avenue and the National Bank of Romania  was built in late 19th century and named after the architects Mihalache Macca and Xavier Vilacrosse. Nowadays renovated, it hosts cozy cafes and boutique stores selling speciality tobacco and hookah pipes.

The Bellu Cementery is the place where many of Romania's famed historical characters have their eternal resting place, including poet Mihai Eminescu, actor Toma Caragiu, and aviation pioneer Henri Coandă. Walk around marble statues, monuments and be sure to visit the cemetery chapel, open until 4 pm.

Hidden in the old center of the Romanian capital this church is a little gem displaying a unique mixture of Romanian and Byzantine architecture. Its small pillars and façade display delicate stone carvings and the interior is covered in frescoes and centuries-old wooden icons. Make sure to check out its small, but peaceful inner yard that offers a break from the hustle and bustle of the avenues nearby.

Having escaped by miracle to the demolition rounds of Romania's former dictator, Nicolae Ceaușescu, it is now one of the most beautiful historical churches in Bucharest. Situated along the busy Victoriei avenue, make sure to pay a visit while you're on your way to the National Art Museum and the Romanian Atheneum.

This gorgeous neo-classical building built in the second half of the 19th century and financed entirely by public subscriptions is considered one of the symbols of the Romanian culture. The ceiling of the main concert hall is decorated in golden leaf and richly decorated with paintings depicting the history of the Romanian people. Home to the prestigious George Enescu Philharmonic, the easiest way to visit it and experience its extraordinary acoustics is by attending a concert. However, visits can also be arranged upon request at the telephone number +40 21 316 0024.

The inn, a traditional Romanian building from the pre-modern period, was built by the Armenian merchant Emanuel Marzaian ("Manuc Bey"), and it was initially a favorite meeting place from tradesmen from all corners of the Balkans. Nowadays, it hosts a typical restaurant with traditional specialities and an Ottoman feel, a pastry shop and a wine cellar.

Hop On / Hop Off Sightseeing Bus Tours
The Bucharest City Tour open air bus is provided by the Bucharest Public Transport Authority (RATB) and runs every year from late-April to late-October. Buses run every 20 minutes on a selected route between Piața Unirii and Piața Presei Libere. Tickets are valid for 24 hours and can be purchased on board, in any of the partner hotels, and on a list of travel agencies.

Romania Slow Tours Bike Tours
An excellent way to learn about the city's communist architecture and turbulent recent past while pedaling through some of its beautiful parks and back streets. The tour starts at the Piața Aviatorilor and ends at Parcul Tineretului. Booking is necessary.

Walkabout Free Tours
A walking tour that takes you through the city's main tourist spots and historical landmark with friendly guides and heaps of information. The tour starts in Piața Unirii and finished in Piața Universității and lasts for two hours. No reservation is necessary.

Cost: the tour is free, but you can tip the tour guide if you liked the service.

Jewish Tour of Bucharest
The old Jewish heritage of Bucharest is something not even many locals know about. Yet the city was once home to an important Jewish community, consisting mainly of Ashkenazi Jews. The abandoned and subsequently restored synagogues, the Choral Temple, and the former Sephardic neighborhood are part of this unique tour that uncovers a distinctive part of Romania's history.

Interesting Times Bureau
Interesting Times Bureau is a small operator offering specialized tours with an alternative touch. Tours may take you around the Romanian capital's food scene, hidden markets, or in areas of urban decay. You may experience home-cooked meals, the city's street art, its bohemian scene and discover cool places frequented by locals. Tours are available upon request. Booking is necessary.

Cost: starting from 35 euros, depending on the tour.

Bucharest is a bustling city with a plethora of events and festivals running throughout the year. Whether you're a music fan, a cinema addict, or a food lover, you will always find something that suits your taste.

Do you have comments or personal information to communicate about this article? Add your comment.
Find links about entertainment / tourism and sightseeing in Bucharest and a lot more in The links of expatriation.
Find more definitions and general answers on expatriation issues in the Expat FAQ (Frequently Asked Questions).
Read more...


Go to the Forum to talk more about tourism and sightseeing in Bucharest, entertainment.
Search for members in Romania


The latest messages posted on the expat forums - Bucharest