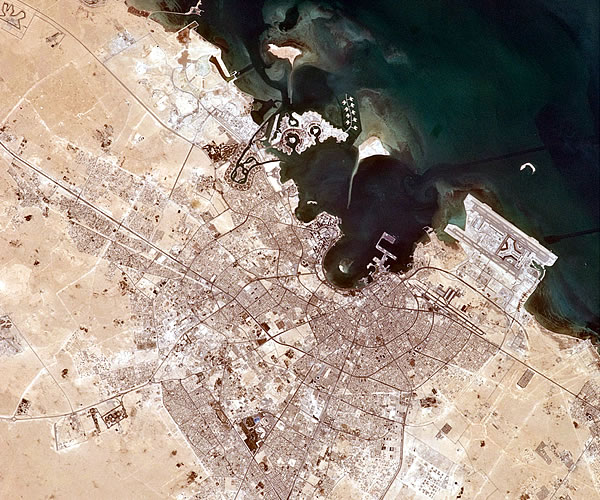 Archaeological discoveries indicate the land of Qatar was populated as early as 4000 BCE. From the fifth to fourteenth centuries CE, Qatar and its people contributed to the cultural and economic development of the Mediterranean and Middle East regions. During the 16th century CE the Qataris aligned with the Turks to drive the Portuguese out of the region. Subsequently, Qatar and other regions of the Arabian Peninsula came under the control of the Ottoman Empire for the next four centuries.

In the aftermath of WWI Turkish rule in Qatar ended, and Qatar signed a protection treaty with Britain in 1916. However, British influence in Qatar was limited to supervision in administrative matters. When Britain announced a policy to end the treaty relationships with the Persian Gulf sheikdoms in 1968, Qatar joined the eight other states then under British protection (today's United Arab Emirates and Bahrain) in a plan to form a union of Arab Emirates. By 1971 the nine had not agreed on terms of union, and Qatar instead became an independent state on September 3, 1971.

Since this time, the Emirs of Qatar have sought to change the country's priorities to make the country modern and competitive. This includes Khalifa ibn Hamad efforts to lower family allowances and increase spending on social programs like housing, health, education, and pensions. This has included a move toward greater democracy, and a freer press. In 2003, a woman was appointed to the cabinet as Minister of Education. Further women's rights have been granted in allowing women to drive, vote, and engage in education and training. The country has also become increasingly open to tourism.

Border issues remain an issue between Qatar and Bahrain as there is debate over who owns the Hawar Islands. They are located only about 1 nautical mile (1.9 km) from the Qatari mainland whilst being about 10 nautical miles (19 km) from the main islands of Bahrain. In 2001, the International Court of Justice gave Bahrain sovereignty over the Islands. Qatar fought this assertion with a multitude of documents – 82of which turned out to be forged. It was decided that Bahrain owns the islands, but is still a point of contention for some.

Qatar is a member of the UN, the Organisation of Petroleum Exporting Countries (OPEC), the Arab League, the International Monetary Fund (IMF) and the World Bank, and the Gulf Cooperation Council (GCC). It is a powerful country of the Middle East with many allies in the region, as well as abroad.

Doha was founded in 1825 under the name Al-Bidda (now the port area of the city). The city was made the capital of the British protectorate in 1916, and became the nation's capital when it achieved independence in 1971.

During the early twentieth century Doha's economy depended on fishing and pearling. With the introduction of Japanese pearls in the 1930's this industry suffered, and Doha experienced high rates of poverty. Oil was discovered in Qatar in the late 1930's, but the Second World War delayed exploration and exportation. Post WWII the city developed rapidly as oil exploration began. During this period, shrimp processing became one of the city's main industries, and remains so today. In the 1970's the University of Qatar and Qatar National Museum were established.

The city has continued to show monumental growth in recent years. By 2015, Qatar had a population of 2,194,817, making it one of the world's fastest-developing countries.

Do you have comments or personal information to communicate about this article? Add your comment.
Find links about overview / history of Doha and a lot more in The links of expatriation.
Find more definitions and general answers on expatriation issues in the Expat FAQ (Frequently Asked Questions).
Read more...


Go to the Forum to talk more about history of Doha, overview.
Search for members in Qatar