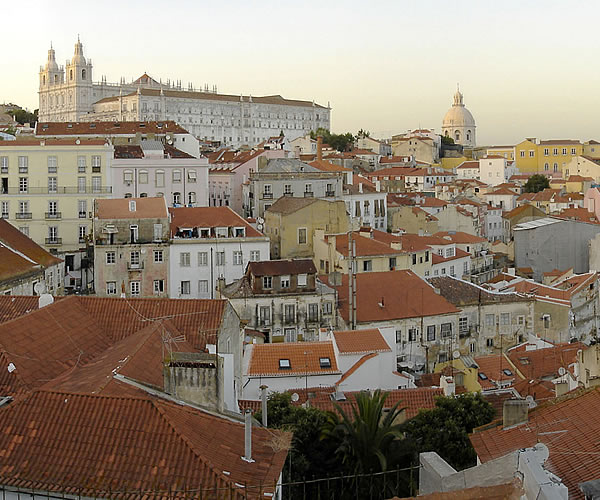 Lisbon is the capital and largest city of Portugal. It is also the seat of the district of Lisbon and capital of the Lisbon region. The westernmost capital in mainland Europe, it is located in the west of the country, on the Atlantic Ocean coast at the point where the river Tagus flows into the Atlantic Ocean. The city occupies an area of 84.8 km2 (33 sq mi). The western side of the city is mainly occupied by the Monsanto Forest Park, one of the largest urban parks in Europe with an area close to 10 square kilometres. Lisbon has a Mediterranean climate that is strongly influenced by the Gulf Stream, giving it one of the mildest climates in Europe.

The city is sunny throughout the year, with an annual average of 2900-3300 hours of sunshine. Summers are warm and dry with average daytime temperatures of 26–29°C, falling to 16–18°C at night. Winters are cool and rainy with temperatures around 8–15°C, while spring and fall are generally mild, or even warm during daytime. Extreme temperatures may reach 36°C in some of the warmest summer afternoons and 2°C in the coldest winter mornings. From May to September the city enjoys cheerful weather with blue skies and some wind as well. Annual rainfall is 1110 mm, spread over 100 rainy days, mostly from October to April.

Officially called the Portuguese Republic, Portugal is a country on the Iberian Peninsula. Located in southwestern Europe, it is the westernmost country of mainland Europe and is bordered by the Atlantic Ocean to the west and south and by Spain to the north and east. The Atlantic archipelagos of the Azores and Madeira are also part of Portugal.

Portugal is one of the warmest European countries and enjoys a Mediterranean type climate in the south and a Koppen type climate in the north. The northern landscape is mountainous in the interior areas, with plateaus indented by river valleys. The south, between the Tagus and the Algarve, features mostly plains and a climate somewhat warmer and drier than in the cooler and rainier north. The Algarve, separated from the Alentejo by mountains, has a climate much like southern coastal Spain. Portugal's highest point is Mount Pico on Pico Island in the Azores. This is an ancient volcano measuring 2,350 meters (7,713 ft). Mainland Portugal's highest point is Serra da Estrela, measuring 1993 meters (6,558 ft).

Do you have comments or personal information to communicate about this article? Add your comment.
Find links about overview / geography of Lisbon and a lot more in The links of expatriation.
Find more definitions and general answers on expatriation issues in the Expat FAQ (Frequently Asked Questions).
Read more...


Go to the Forum to talk more about geography of Lisbon, overview.
Search for members in Portugal