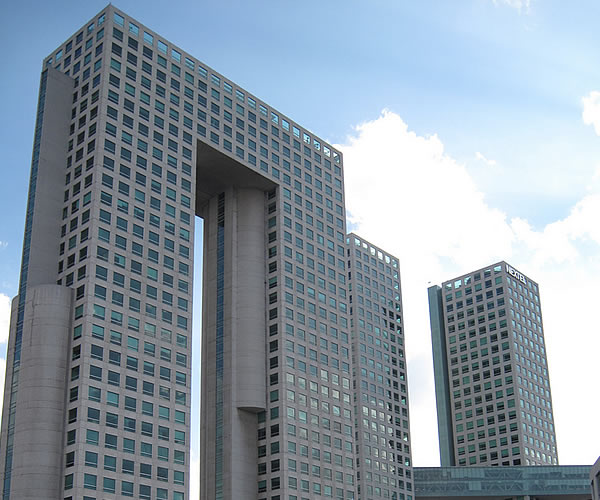 Mexico offers schooling from primary to junior high to senior high school. Most schools offer a kindergarten and pre-school education starting as young as 3 years old. The ratio of English and Spanish language teaching is often up to 50% English. Each school has its own applications, and some schools specialize in an almost complete education in English, such as the American School and Greengates. Classes generally run from early morning (8 a.m.) to early afternoon (2 or 3 p.m.). The literacy rate is at about 91.6% for the population and 97.2% for youths under the age of 14.

Public Schools's curriculum is managed by the federal level Secretary of Public Education. Funding is allocated by the government of Mexico City (in some specific cases, such as El Colegio de México, funding comes from both the city's government and other public and private national and international entities).

Private schools allow parents to have more of an influence over the curriculum and are much more expensive. In addition to monthly tuition fees and a one-off enrollment fee, parents are expected to pay for transportation and many of the books, texts and clothes (all schools require the wearing of school uniforms), all of which are sold in the respective schools.

When looking to change schools, there are many issues to be discussed. The school must ascertain how and at what grade a child is to transfer his or her studies from their old school to the new one. An official apostille is required from the relevant public office for education in the country where the child was last studying. This is to certify that your child can continue his or her studies in an equivalent school and grade in Mexico. examine the curriculums offered at different schools to find the proper fit for your student. Elements like if American English or British English is taught, and how much Spanish is used are important factors. How is the school certified and how will credits be transferred are more important questions. Another issue is transportation; how far from home is the school? Last but not least, compare tuition fees and enrollment fees.

Primary and secondary education is free and mandatory. Schooling is in several stages:
Pre-escolar: Federally Funded programs for children ages 4-5.
Primaria: Schools with grades 1-6 and at least one teacher per grade. Multigrados: One-room schools with one teacher for grades 1-6 or multigrade schools with several teachers, each teaching more that one grade.
Secundarias: Schools that enroll most nonrural students, including those who are college-bound for Grades 7-9.
Tecnicas: Schools that provide vocational training for noncollege-bound students in grades 7-9.
Preparatorias and Bachilleratos: Schools for college-bound youth, where students must choose one of 4 professional areas: physical-mathematics, chemical-biological, economic-administrative, or humanities for grades 10-12.
Tecnnologicas and Comercios: Schools for students who have a particular vocational career in mind in grades 10-12.

Textbooks are free for primary students, but students in grades 7-12 must pay for their texts. Texts in grades 1-2 use the "global method," which combines social sciences and environmental studies. Throughout primary school the teachers and texts emphasize Spanish and mathematics, and also include geographic and ecological knowledge.

The grading scale in Mexico is commonly 1 to 10, and teachers give examinations 5 times a year in each grade. The tests must cover the national curriculum, but are developed locally. There is a national examination at the end of the school year. Students who score less than a 6 on the test are retained in the same grade level for the coming year.

There are both public and private universities in Mexico. Many of the public universities in the country sponsor high school programs as well. Tuition ranges depending on how many courses the student is taking and the university of their choice. Each academic year costs approximately $1,800. Graduate programs are more expensive. There are scholarships and financial aid so students can acquire money for their studies.

The Instituto Tecnológico Autónomo de México (Mexico Autonomous Institute of Technology), commonly known as ITAM, is a private research university located in Mexico City. It is one of the nation's preeminent institutions of higher learning. The best business and economics school in Mexico (according to Reforma) and the best in Latin America (according to America Economia). It is also considered one of Mexico's think tanks.

Ciudad Universitaria (“University City” or “CU”)was designed by architects Mario Pani and Enrique del Moral. The structure encloses the Olympic Stadium and has about 40 faculties and institutes, the Cultural Center, an ecological reserve, the Central Library, and a few museums. It was built in the 1950s on an ancient solidified lava bed in Coyacán called "El Pedregal" to replace the scattered buildings in downtown Mexico City where classes were given. It was declared a World Heritage Site by UNESCO in 2007.

The National Autonomous University of Mexico (UNAM) is the second-oldest (established in 1551) and the largest (with 269,000 students) university in the Americas. Three Nobel laureates and most of Mexico's modern-day presidents are among its former students. UNAM conducts 50% of Mexico's scientific research and has presence all across the country with satellite campuses and research centers. The university is the highest ranked Spanish-speaking university in the world.

The National Polytechnic Institute (IPN) is s one of the largest and finest public universities in Mexico. The university has many programs devoted to scientific study.

One of the most prestigious private universities is Monterrey's Technological and Higher Education Institute (ITESM). It was ranked as the 7th top International Business School worldwide and 74th among the world's top arts and humanities university. ITESM has thirty-two secondary campuses, apart from its Monterrey Campus.

The National Library of Mexico(Biblioteca Nacional de México) is located in Ciudad Universitaria. Established on October 26, 1833, the library features heritage pieces of the country. The most valuable section is the Reserved Fund with custody manuscripts, incunabula, historical archives and published works by notable Mexican printers. The library also has an excellent collection of foreign books published about Mexico. In total, the National library houses 1,250,000 documents, including books, maps and recordings. It is the largest library in Mexico and one of the largest libraries in Latin America.

Newspapers and other periodicals are archived in the National Newspaper Library of Mexico (Hemeroteca Nacional de México) located also in Ciudad Universitaria, next to the facilities of the National Library.

Do you have comments or personal information to communicate about this article? Add your comment.
Find links about education / school system in Mexico City and a lot more in The links of expatriation.
Find more definitions and general answers on expatriation issues in the Expat FAQ (Frequently Asked Questions).
Read more...


Go to the Forum to talk more about school system in Mexico City, education.
Search for members in Mexico