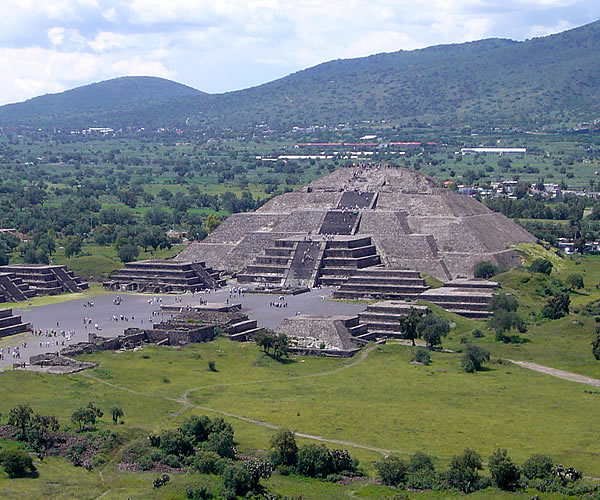 México City lies in the center of Mexico, the epicenter of the nation both geographically and historically. Mountains rise up beside the city on its high altitude plateau. The city is about 7300 feet (2225 meters) above sea level which makes the air thin and affect people who are not assimilated with headaches and light-headiness. The surrounding valley, known as the Valley of Anáhuac, is a lake basin with no outlets which has created some issues with run-off. Complex cannels and waterways were created first by the Aztec and further developed by the Spanish to accommodate the growth of the city. The time of day in México City corresponds to GMT -6, and daylight-savings time is observed in summer.

The temperature of the city averages at 18 degrees C (64 degrees F). This temperate climate is again due to the high altitude of the city. April and May tend to be hot and dry with the rainy season beginning in June ending around October. Mornings tend to be clear with rain clouds gathering in the afternoon during the summer months. February to May tend to be the warmest months. For more information on weather and updates, go to
http://www.allaboutmexicocity.com/weather .

México City's traditional layout and orientation has always extended from north to south, the north being associated with the area surrounding the Villa de Guadalupe and the south with the Ajusco volcano, the Tlalpan neighborhood and the pass that leads to Cuernavaca.

The city is officially divided into 16 delegaciones, also known as boroughs. The boroughs are sub-divided into colonias or neighborhoods. Here is a brief break-down of areas within México City:

Our network of international removal companies can move your furniture & possessions to Mexico and anywhere overseas.

Do you have comments or personal information to communicate about this article? Add your comment.
Find links about overview / geography of Mexico City and a lot more in The links of expatriation.
Find more definitions and general answers on expatriation issues in the Expat FAQ (Frequently Asked Questions).
Read more...


Go to the Forum to talk more about geography of Mexico City, overview.
Search for members in Mexico