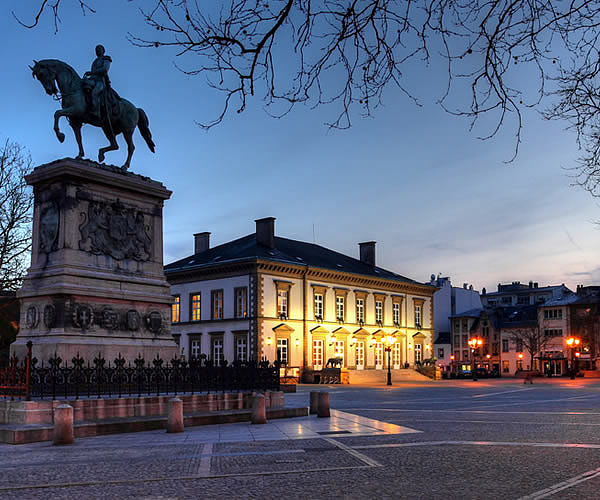 The tax year is the same as the calendar year - January 1st to December 31st. Residents pay tax (impôt) on a number of different types of income. This includes income from a business, income derived from employment, income from pensions and investments, revenue gained from renting out property and income from the sale of property or other assets.

There are five categories of taxable income in Luxembourg:
Income from trades or businesses, including net profits from a trade or business, including agriculture and forestry income
Employment Income including salary and benefits (i.e. housing, company car, etc), as well as all sick pay, maternity benefits or other disability payments made in lieu of salary. Exempt from income tax are certain bonuses paid for night or overtime work, severance pay and seniority bonuses.
Pensions and annuities on which residents must normally pay tax unless the pension is paid by a foreign government with which Luxembourg has a double taxation treaty. All forms of private pension are included in taxable income even when paid from abroad. Investment income including most types of interest and dividend (so-called passive investment income) and net income from rented property
Other income including any payments for jobs or services in excess of 250 euro and taxable capital gains.

Fortuitous receipts such as lottery or gambling winnings, gifts, rewards and prizes are exempt from tax.

Individual income tax rates can be as high as 40 percent (38.95 percent + 2.5 percent surcharge). The rate depends on which of the 17 income bracket you are in as well as family status. The basic types of tax are income tax (impot sur le revenu des personnes physiques or einkommenssteuer), social security (sécurité sociale), investment income and capital gains. As in many other countries, employees' income tax (sometimes called salary tax) is deducted by their employers. This is referred t as a "pay as you earn" (PAYE) system.

In Luxembourg, you'll pay 10-15% income tax on your earnings.

The number of dependents is indicated by a figure following the tax class. For example, a married couple with two children would be classified as 2.2, while a single mother with one child would be 1a.1. A married person who is widowed, divorced or separated remains in class 2 for three years following the bereavement or separation.

Foreign workers should be issued a tax card (fiche de retenue d'impôt) soon after arriving. The card contains personal details and the details of any deductions that you are entitled to, such as dependent children. The card will indicate the tax category to which you belong. This information is used to calculate the amount of tax payable and should be given to the employer. The tax card also includes a form for notifying the tax office of any changes to your personal circumstances which may affect the amount you need to pay.

The tax system in Luxembourg distinguishes between resident and non-residents. Residents are taxed on their world-wide income, while non-residents are taxed only on income originating in the local country. A person can be resident in more than one country, but can only be domiciled for tax purposes in one country. People entered into the local population register are most likely considered domiciled there for tax purposes.

Luxembourg has a corporate tax base of 30.36 percent. This rate is composed of 22 percent income tax, a five percent unemployment fund added to the income tax rate and a 7.5 percent municipal trade tax for Luxembourg City.

VAT is also known as TVA in French (taxe sur le valeur ajoutée ) or MwSt. in German (Mehrwertsteuer). Rates vary between 3 and 15 percent depending upon the service or goods provided. This is the lowest rate in the EU.

Taxpayers make an annual tax declaration (declaration fiscale or steuererklarungto)with their local tax office. The declaration must be submitted by the end of March in the year after the income was received. Also known as a tax return (déclaration des revenues), the process is somewhat complicated and most residents engage the services of a professional accountant.

Once the paperwork is submitted, it may take as long as six months to receive your tax assessment and bill. The assessment will summarize how much you have paid already throughout the year and if you are due money back, or owe more money. Any amount due to the tax authorities must be paid within two months of the date of the assessment. The tax authorities helpfully enclose a bank transfer form for you to complete. Payments can also be made in four installments during March, June, September and December. Returns are generally credited directly to your bank account within a few weeks of the assessment.

If you find errors in your assessment, you can contact the local tax inspection office (the address and phone number will be included in the assessment).

There are items of expenditure which are considered to be tax deductible (deductible des impôts). Take these into consideration when filing your return.

The Ministry of Finance publishes extensive information on income taxes to help you file taxes. Information is provided in a variety of languages. Local tax offices are also helpful in answering questions.

The country has over 50 tax treaties in place to prevent residents from paying tax on the same income in more than one country. Contact your nearest embassy or consulate to find out the details of your country's tax agreement with Luxembourg.

Our network of international removal companies can move your furniture & possessions to Luxembourg and anywhere overseas.

Do you have comments or personal information to communicate about this article? Add your comment.
Find links about at work / tax system in Luxembourg and a lot more in The links of expatriation.
Find more definitions and general answers on expatriation issues in the Expat FAQ (Frequently Asked Questions).
Read more...


The latest messages posted on the expat forums - Luxembourg