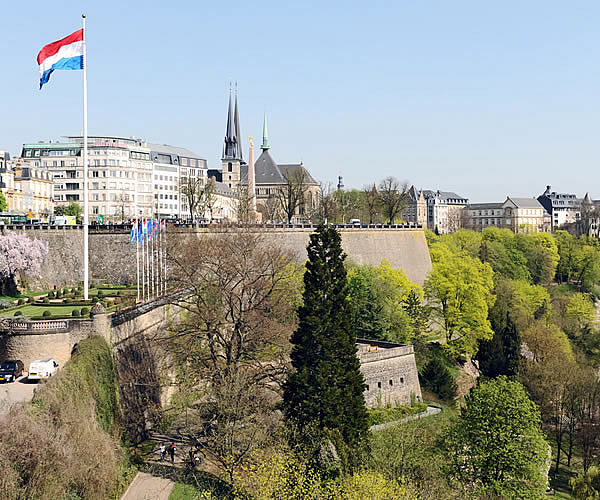 Luxembourg has been in an important position to make history. In 963, the Count of Ardenne acquired Lucilinburhuc, (Luxembourg Castle). A town developed around the fort and by the 14th century, 3 members of the House of Luxembourg reigned as Holy Roman Emperors. In 1437, a lack of a male heirs had resulted in a crisis. With no one to follow in royal footsteps, the land was sold to Philip the Good of Burgundy. The fortress town continued to develop and grow as the Bourbons, Habsburgs, Hohenzollerns, and the French all had a period of rule.

In 1815, Napoleon was defeated and the Prussians and the Netherlands fought for control. The Congress of Vienna made the decision to raise Luxembourg's status to a Grand Duchy, but to make it the property of the King of Netherlands William I of Orange-Nassau. During this period, the Belgian Revolution of 1830-1839 occurred, reducing Luxembourg's territory by more than half. At the end of the war, Luxembourg's independence was affirmed by the 1839 First Treaty of London. The treaty also confirmed Luxembourg as perpetually neutral, and the great powers agreed to protect the neutrality of the Grand Duchy. The territory was forced to join the German Confederation and to let Prussian soldiers occupy its fortress.

Luxembourg gained independence during the 1860s when the German Confederation was dissolved in 1866. The 1867 Treaty of London re-confirmed Luxembourg's independence and Prussia withdrew from the fortress and accepted Luxembourg as a neutral country. In 1890, William III died, leaving his heir, daughter Wilhelmina as Queen of the Netherlands. Adolphe, head of the house of Nassau, becoming Grand Duke of Luxembourg.

During World War I, Luxembourg was invaded and occupied by Germany. It was allowed to maintain its independence, but Grand Duchess Marie-Adelaide was ridiculed by her subjects for letting the invasion occur. In 1919, Grand Duchess Charlotte, her sister, took power. Luxembourgers voted to retain the monarchy, but extended their democratic privileges, including universal suffrage.

Luxembourg was not able to maintain its neutrality during World War II. In 1940 Nazi Germany invaded and occupied the country on its way to occupying France. Luxembourg was treated as a Germanic territory and formally annexed in 1942. The government of Luxembourg fled to London and tried to fight by sending a small group of volunteers to the Normandy invasion. Allied troops liberated Luxembourg in September 1944.

The country was a founding member of the United Nations in 1946. In 1949, it became a member of NATO. It was part of yet another large union in 1957 when Luxembourg became one of the six founding countries of the European Economic Community. The remains of the fortress were added to the UNESCO World Cultural Heritage list in 1993 and Luxembourg converted to the euro in 1999. The country continues to play a role in European and international affairs.

Our network of international removal companies can move your furniture & possessions to Luxembourg and anywhere overseas.

Do you have comments or personal information to communicate about this article? Add your comment.
Find links about overview / history of Luxembourg and a lot more in The links of expatriation.
Find more definitions and general answers on expatriation issues in the Expat FAQ (Frequently Asked Questions).
Read more...


Go to the Forum to talk more about history of Luxembourg, overview.
Search for members in Luxembourg


The latest messages posted on the expat forums - Luxembourg