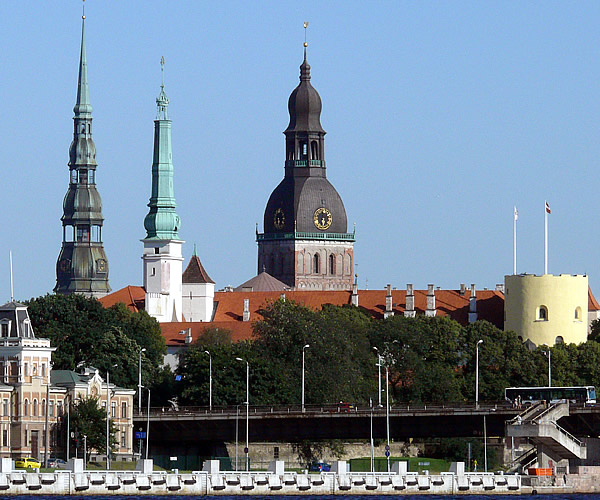 Latvia is a small, open economy. After experiencing a severe economic crisis in 2008 and 2009 when the GDP reduced by as much as 18%, Latvia chose austerity measures over devaluation of the currency and successfully implemented structural reforms. As a result, in the past years the country has had one of the fastest economic growth rates in the EU, and in January 2014 Latvia became a member of the Eurozone. Latvia is also a member of the World Trade Organization (WTO), and is currently in the process of joining the Organisation for Economic Co-operation and Development (OECD).

The majority of Latvian companies, banks, and real estate properties have been privatized. The state continues to hold stakes only in the largest enterprises, e.g., in the telecommunications, electricity, aviation, and forestry sectors.

In 2013 the Latvian GDP (purchasing power parity) was 38.87 billion USD, or 19.100 USD per capita. The service sector accounts for approximately 70% of the GDP. Exports annually contribute approximately one third of the GDP, the largest trade partners are Russia, Lithuania, Estonia, Germany, Poland, and Sweden. Latvia's unemployment rate in 2014 was 10% of the economically active population.

The most developed industries in Latvia are timber and wood-processing, agriculture, food products, as well as manufacturing of machinery and electronics. Due to its advantageous geographic position, also the transit sector is an important part of the Latvian economy. The three large ports of Riga, Ventspils, and Liepaja serve as transit points between Russia and Central Asia, and the West. A considerable part of the transit goods is composed of crude oil and oil products.

Riga is not only Latvia's capital but also its economic and financial center. The city is single-handedly responsible for half of Latvia's GDP, half of its exports, and half of its employment opportunities. Also the unemployment rate is lower in Riga than in Latvia is a whole, in 2013 it was 5.6 %.

Due to its advantageous geographical position, Riga has historically been a hub of trade and finance. These two branches of economic activity continue to be the most important also today with trade accounting for 20% of all jobs and finance and commerce for 17% of jobs in 2013. Other important industries are industrial manufacturing, transport, as well as tourism and IT.

The Riga International Airport is the largest airport in the Baltics and offers direct flights to over 80 destinations, operated by over 20 carriers. In 2014 the airport served just under 5 million passengers and delivered around 33 thousand tons of cargo. In turn, the Freeport of Riga has the status of free economic zone and it is the largest port in the Baltics by cargo turnover.

If you want to move money abroad, from Latvia or to Latvia for example, Fexco provides efficient and secure global bank to bank transfers and bespoke payment solutions for both business and personal clients.

Do you have comments or personal information to communicate about this article? Add your comment.
Find links about overview / economy of Riga and a lot more in The links of expatriation.
Find more definitions and general answers on expatriation issues in the Expat FAQ (Frequently Asked Questions).
Read more...


Go to the Forum to talk more about economy of Riga, overview.
Search for members in Latvia


The latest messages posted on the expat forums - Riga