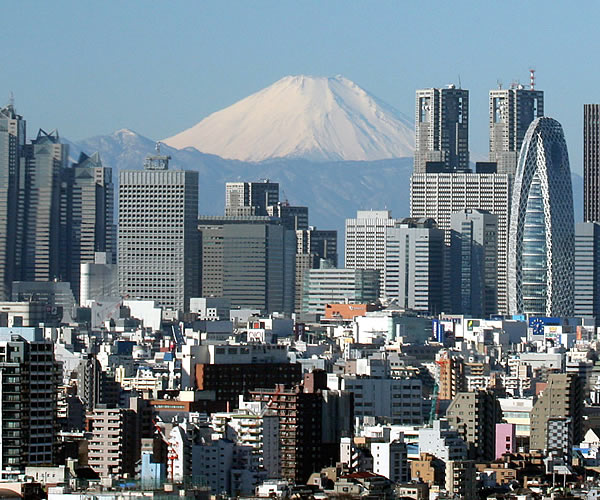 Archaeological evidence found in the region of what is now Tokyo has revealed that the area was inhabited by tribes during the Stone Age. The present city was founded in the twelfth century and bore the name , meaning estuary. In 1457 a castle was completed at Edo, which passed to Ieyasu Tokugawa,founder of the Tokugawa line of shoguns in 1590. After Tokugawa assumed the title of shogun in 1603, Edo became the capital of the shogunate, although the imperial capital remained . During this period city life was dominated by the shogun's palace, the residences of the feudal barons (or daimyos), merchants and samurais. Japan was practically closed to foreign influence for the next two-hundred and fifty years. The city of Edo thrived during the seventeenth and eighteenth centuries, but the power struggle between shogun and emperor finally diminished the power of the shogunate and the city's fortunes declined in turn. The shogun surrendered Edo castle to imperial forces in 1868, and the Emperor Meiji made Edo his capital, giving it a new name, Tokyo, or eastern capital. With the Meiji Restoration began a period of great modernisation and development in Tokyo. The feudal system was quickly abolished in favour of the prefectural system. In 1874 The Tokyo Metropolitan Police Department was established, and ten years later the first steps in the creation of a train system for the capital were completed. In 1923 an enormous earthquake struck, and the ensuing fire destroyed nearly half the city and killed more than 150,000 people.

In 1941 Japan attacked the American naval base at Pearl Harbour, which brought World War Two to Japan’s doorstep. Despite important gains early in the war Japan ultimately suffered great losses and the American firebombing of Tokyo on March 10th 1945 alone killed 80,000 to 100,000 people. By the time the Japanese surrendered to Allied forces in 1945, Tokyo's population had been reduced to half of its 1940 levels, either from the death toll of bombings or because of people fleeing the capital. From September 1945 until April 1952, when the San Francisco Peace Treaty came into effect, Japan was governed and occupied by the Allies, of which the United States was the main player. Indeed the American presence in Tokyo made it an important base for command and logistics during the Korean War. Under the terms of the post-war Japanese constitution Japan is only allowed to have a small military force of its own, strictly for the purposes of defence.

After the war the emperor was relieved of his political powers and was forced to publicly admit that he was not a living god, the belief held by followers of Shinto, the national religion, up to that time. The continuing American military presence in Japan - which in Tokyo includes Yokota Air Base and a small number of minor bases - is still sizeable and is a contentious issue for many Japanese, especially since American military personnel are practically immune from prosecution by Japanese authorities should they commit any crimes while on duty in Japan.

The first Shinkansen, or Bullet Train, then the fastest train in the world, was unveiled on 1964, the same year Tokyo hosted the Olympic Games. Tokyo had finally emerged from the trauma of World War Two and the Olympics helped make Japan's "economic miracle" the centre of world attention. A boom in the Japanese economy began in 1986 and land prices in Tokyo went through the roof. By 1990 however the bubble had begun to burst and many "Salary Men" (Japanese use the English idiom), or main breadwinners, suffered the painful humiliation of losing their jobs and no longer being able to support their families during the 1990's. The World City Expo was due to be held in Tokyo in 1996 but was cancelled as a result of the actions of the Aum Shinrikyo cult in March 1995. They released poisonous Sarin gas into the Tokyo subway system, killing twelve people and affecting thousands. In 1999 the colourful, dynamic and controversial politician Shintaro Ishihara was elected Governor of Tokyo, a post he still holds.

If you want to move money abroad, from Japan or to Japan for example, Fexco provides efficient and secure global bank to bank transfers and bespoke payment solutions for both business and personal clients.

Do you have comments or personal information to communicate about this article? Add your comment.
Find links about overview / history of Tokyo and a lot more in The links of expatriation.
Find more definitions and general answers on expatriation issues in the Expat FAQ (Frequently Asked Questions).
Read more...


Go to the Forum to talk more about history of Tokyo, overview.
Search for members in Japan


The latest messages posted on the expat forums - Tokyo