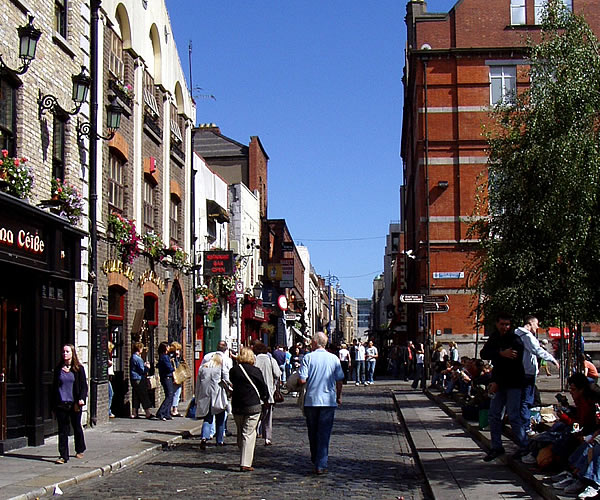 Dublin has an extensive bus network, as well as some rail and tram lines.

Fares depends on the distance you travel. For example, traveling stages 1-3 is 2 euro. You usually just tell the driver your destination, and they will calculate your fare.

The TaxSaver Commuter Ticket Scheme is an incentive for workers to use public transport (bus or rail).

This incentive is seen as a positive way to encourage more people to avail of public transport in Ireland and to reduce traffic congestion. The employers and employees participating in the scheme sign a contract with each other agreeing to participate. The employer then applies, for example, to Iarnród Éireann and/or Dublin Bus for commuter tickets for employees who have chosen to take part.

Employees participating in the scheme benefit from reduced income tax, PRSI and Universal Social Charge (USC) payments. They receive tickets either as part of their salary package (salary sacrifice), in lieu of an annual cash bonus or as a benefit-in-kind. Savings arise because tickets are not subject to tax, PRSI or USC.

Information on where to apply is available on Citizensinformation.ie

There is a Free Travel Scheme for residents over 66, as well as some special classes.

Leap Cards are another option. Similar to the Oyster card in London, this allows for you to pre-pay for credit and then pay a discounted fare as you go.

Buses and Light Rail in Dublin

Public bus services are regulated by the National Transport Authority. There is a range of public bus transport services (both private and State-owned) offering services on a number of routes.

Operators providing public bus passenger services are required to be licensed unless the service is subject to a Public Services Obligation Contract.

Luas (Irish for "speed") is Dublin's light rail tram system. The system consists of 54 stations and 36.5 kilometres (22.7 miles) of track. There are two main lines:

Many stations have "park and ride" facilities to encourage commuters to leave their cars in station car parks and reduce the volume of traffic.

Dublin's ferry port is located centrally and is at the heart of Ireland's road and rail network. It is the biggest and most popular port in Ireland. More than 1.7 million passengers pass through annually arriving from or sailing to England, Wales, France and the Isle of Man. There are 3 terminals with Irish Ferries and Steam Packet using terminal 1, Stena Line terminal 2 and P&O Ferries terminal 3.

Open since 1940, this is Ireland's busiest airport. The old terminal is a listed building and still in use, thought there have been major renovations and updates. There are almost 600 aircraft movements per day and they reach over 180 destinations.

How to Get to/from Dublin Airport

The airport is located 5.4 miles north of Dublin in Collinstown. Allow for at least 30 to reach the city centre from the airport (60 minutes to southern suburbs).

Shuttle: Airlink Express, AirCoach, Airport Hopper & CityScape also offer shuttle services. Expect to pay about 7 euros one-way, with discounts for booking online.
Bus: Dublin Bus offers many routes throughout Dublin, including the 16 to Ballinteer, the 41 to Lower Abbey Street and the 102 to Sutton Station
Drive: Near the M50 and M1 motorways
Taxi: Taxi is the best option for groups of three or more, even one euro is charged for each extra passenger. Expect to pay around 30 euros.

Find out how to get to/from Airport on DublinAirport.com

All taxis in Ireland have a large yellow and blue roof-sign and door signage. Taxis may be hailed on the street, picked up at a taxi rank or ordered by phone/app.

All taxis are metered and charges are the same throughout the country. Taxis have a fare sticker on the dashboard and fare cards in the seat pockets which explain the fares. If you want an estimate of the fare in advance, use the official online fare calculator.

The initial fares are:

There are no charges for luggage or an airport pick up and few taxis have facilities to take credit or debit cards in the cab.

Driving in Ireland can be a bit of the challenge for those not accustom to driving on the left. Not to mention, narrow winding roads, rain, mist and fog, sheep and cows, roundabouts, and the dreaded loose chippings. However, if you take it easy you should do fine.

Roads in Ireland are generally of a high standard. In the Republic of Ireland, motorways are prefixed with an "M" (for example M50). National roads are prefixed with an "N" (for example N18) and can be either national primary or national secondary roads. National primary roads almost always consist of several driving lanes in each direction, while national secondary roads may also include those with two-way traffic. Distances on road signs are shown in kilometres and speed limits are given in kilometres per hour (km/h).

Guide on car rental
If you're planning to rent a car, this guide should be useful..
https://www.irishcarrentals.com/renting-a-car-in-ireland.php

Opportunity to help you to update this page
Under Bus/Coach -
There is also a Leap card option which is a pre-paid card for transport including on DART trains and Irish Rail Commuter services, Dublin bus, Iarnród Éireann and Luas tram.

The minimum top up for the card is currently €5.

There are a daily/weekly/month cap to save money and it is cheaper than paying cash.

Under Airport -
Easyjet does not service Dublin city at either Dublin Airport terminals. This should be removed.

The Leap card : prepaid system for Dublin transport
The leap card is a prepaid card, introduced in Dublin at the end of 2011, that can be used instead of paper tickets to pay-as-you-go for transport in Dublin. It works on DART trains and Irish Rail Commuter services, Dublin bus, Iarnród Éireann and Luas tram.

The minimum top up for the card is currently €5.

Time based tickets (e.g. a weekly or monthly ticket) will be made available on Leap Cards in the near future.

The advantages of Leap Card are:
- You pay less with a Leap card than when you pay for single fares with cash.
-You can jump on Dublin Bus, Luas, DART and commuter rail services around Dublin when it suits you, without having to plan your journey or buy a specific ticket in advance.
- No more queuing at ticket machines for single tickets on Luas, DART and commuter rail.
- You can register your Leap Card online and see your card history and buy Travel Credit online.; also if it’s lost or stolen, no one else can use it.

Check the website for latest changes and recent fares: https://www.leapcard.ie/
Do you have comments or personal information to communicate about this article? Add your comment.
Find links about practical life / transport in Dublin and a lot more in The links of expatriation.
Find more definitions and general answers on expatriation issues in the Expat FAQ (Frequently Asked Questions).
Read more...


Go to the Forum to talk more about transport in Dublin, practical life.
Search for members in Ireland