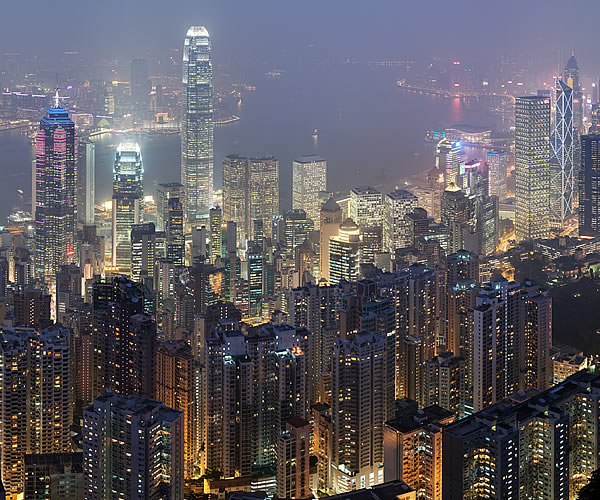 Hong Kong is a country made up of Hong Kong island, Kowloon and the New Territories (which make up the peninsular and which emerges from Southeastern China) and a scattering of 236 islands, both major and outlying, varying in size and population density. In 1998 one of these islands, Chep Lap Kok (off the important Lantau Island) saw the opening of the Hong Kong International Airport, or Chek Lap Kok Airport. This replaced the previous main airport, Kai Tak, which, having been built in 1925 in the busy Kowloon City district, was no longer able to cope with the sheer volume of cargo and passenger traffic now pouring though its gates.

Hong Kong is situated between the South China Sea, the Pacific Ocean and the Taiwan Straits, and has several deep natural harbours protected by mountains. Amongst these are the famous Victoria Harbour and Aberdeen Harbour. As a result of this extremely favourable location Hong Kong is a major international shipping channel.

With a population of over 7 million people squeezed into an area of 1104.3 km2, Hong Kong is one of the most densely populated countries in the world, although many of the outlying islands remain uninhabited. It is still in the midst of land reclamation and is already bigger than it has ever been. The two official languages are Cantonese and English and the population is made of 94,9% chinese, 2,1% filipino and 3% others (mainly europeans).

Although subtropical, with spring lasting from March to May, summer from June to September, Autumn from September to November and winter from December to February, its seasonal variations are fairly impressive with humidity reaching 87% in late spring/early summer and temperatures reaching as high as 33° Celsius compared to humidity of 74% and temperatures of a relatively low 17° Celsius in the winter. Despite being re-known for its typhoon season which runs roughly from May through to September, it is unusual for Hong Kong to be hit directly by one and all that may be noticed is a rather enthusiastic storm. However, this does not mean that the risk of a severe typhoon does not exist, and the country has put in place an easy warning system that ranges from T1 through to T10, with T1 being a warning that, although a typhoon has been spotted and may be a few days away if it passes over at all, it would be best to keep an eye out for further warnings, and T10 meaning that Hong Kong has had a ‘direct hit’. This means that the eye of the storm is directly above the country and damage to buildings can be very high with the possibility of loss of life. Fortunately this is an extremely rare event, with the last direct hit occurring in 1999.

Hong Kong’s landscape reflects its volcanic terrain ( the last major activity having occurred in the Jurassic period, over 140 million years ago) and thus has many hills and mountains, although there are many flat areas to be found on the Kowloon peninsular and the New Territories, in addition to which the flat, narrow band of land that lies on the northern shoreline of Hong Kong, between the mountains and the sea accommodates most of the population of Hong Kong.

The climate in Hong Kong is subtropical and very humid. It is also a region which has the monsoon. The average temperatures are between 15 and 25°C in November to February, 18 to 27 from March to August, 30-35°C and from September to October it would between 25 to 30°C.

Since the handover to China in 1997 (see the History section), Hong Kong is part of China.

China occupies a vast land mass (over 9 million km2) and has three distinct climatic zones. The northern part of the country, including Beijing, has severe winters with temperatures descending to artic levels, the central area, including Shanghai has a temperate climate and the southern region a subtropical climate. The landscape of the country varies from region to region, with mountains in the west and plains in the east. The majority of China's agricultural land lies around the mouths of the Huang He and Yangtze rivers, in the central eastern part of the country. The south of the country is characterised by hills and low mountain ranges. The northwest is drier, and includes the Gobi desert.

The area normally referred to as 'mainland China', which excludes Hong Kong, Macau and Taiwan, is divided into 22 provinces, 5 autonomous regions and 4 municipalities.

If you want to move money abroad, from Hong Kong or to Hong Kong for example, Fexco provides efficient and secure global bank to bank transfers and bespoke payment solutions for both business and personal clients.

Do you have comments or personal information to communicate about this article? Add your comment.
Find links about overview / geography of Hong Kong and a lot more in The links of expatriation.
Find more definitions and general answers on expatriation issues in the Expat FAQ (Frequently Asked Questions).
Read more...


Go to the Forum to talk more about geography of Hong Kong, overview.
Search for members in Hong Kong


The latest messages posted on the expat forums - Hong Kong