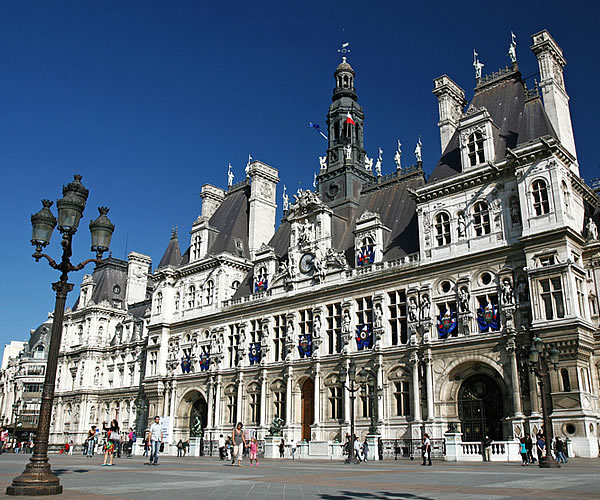 The teachers in public primary and secondary schools are all state civil servants. Professors and researchers in France's universities are also employed by the state. The ministry is the largest employer in France.

The school calendar is standardized throughout the country and runs from early-September to early-July (divided in 3 main zones for school holidays). Curriculum (le programme officiel) is the same for all French students in public, semi-public and subsidized institutions. The Bulletin officiel de l'éducation nationale lists all current programmes and teaching directives. Laïcité (secularism) is one of the main precepts of the French republic and religious instruction is not provided in public schools.

School years in France are numbered on a decreasing scale. Pupils begin their secondary education in the sixième (6th class), and transfer to a lycée in the seconde (2nd class). The final year is the terminale. The word for student (étudiant(e)) is usually reserved for university-level students. Collège and lycée students are referred to as élèves (pupils or students in English).

Primary education (enseignement primaire) is mandatory starting at the age of 6. However, many parents choose to send children to nursery classes (maternelle) starting as early as age 3, or pré-maternelle or trés petite at age 2. Maternelle are usually affiliated to a borough's primary school and therefore are free. The last year of maternelle, grande section, prepares young students to continue their education to primary school.

There is no entrance examination into collège, but administrators have established a comprehensive academic examination of students starting in sixième. The purpose of the examination is evaluating pupils's level on being graduated from primary school. The role of the collège is to prepare students for the advanced subjects of the lycée. At the end of the troisième class, students sit for le diplôme national du Brevet, an end-of-collège examination (equivalent to the British GCSE for example). The brevet is not required for entrance to the lycée, nor does passing it guarantee that a pupil will progress to the higher-level school. During the last conseil de classe in June, teachers and administrators decide whether or not a pupil can progress to the next grade. In deciding, they evaluate the student's skills, participation, and behavior.

A typical school week consists of around 26 hours of schooling. French language and literature occupy about 4–5 hours per week, with mathematics taking about 4 hours a week, and other subjects occupy 1 - 3.5 hours per week. Each class has a professeur principal (main teacher or class tutor) who is the link between the teaching staff, administration, and pupils. Pupils elect two délégués (delegates) and two suppléants (substitutes) to represent them at the conseil de classe (class council). These meetings dictate honours and records warnings on the bulletin de note (report card).

The lycée is the last stage of secondary education in the French educational system. Lycées are divided into
Lycée général - leading to two or more years of post–baccalauréat studies, this is the usual stepping stone to university and business school degrees.
Lycée technologique - leading to short-term studies
Lycée professionnel - vocational qualification leading directly to a particular career.

The country is divided into three zones (A, B, and C) for school holidays. Lyon, is in zone A, Marseille is in zone B, and Paris and Bordeaux are in zone C.

Private schools (écoles privées) can offer an elevated environment of learning for some students. An estimated 15 percent of students in France attend private schools. It is important to visit a school to determine the best fit for you and your child. There are a few private boarding schools (internat) in France, but most operate on a Monday to Friday basis. Many private schools are international schools.

Most private schools have open days for prospective parents, but it is wise to ask to make an appointment to visit on a normal working day. There's a wide range of private schools in France, including parochial (mostly Catholic) schools, bilingual schools, international schools and a variety of foreign schools, including US and British schools. Questions you may want to ask:

Private schools are generally quite expensive, but much less so than schools in the UK. Fees range from school to school so make sure to compare. Most annual fees range from €2,000 to €4,000 per year (they are subsidised by the State), but some specialty schools can cost in excess of €30,000 per year. On the other end, some sous contrat schools may be as low as €300 per year. Paris area schools are the most expensive.

Sous contrat d’association schools have a contract with the French government. These schools must follow the same educational program as state schools and receive government subsidies. They are generally less expensive.
Hors contrat or école libre do not have contracts with the government. These schools are free to set their own curriculum and are often religiously affiliated (Catholic is most common). They receive no state subsidies and are more expensive.

Most sous contrat charge additional fees, such as registration fees, lunches, etc. Extra activities like instrumental instruction, school uniforms, or school trips also require additional fees. Many private schools have their own second-hand shops selling uniforms and other supplies. There are occasional grants and scholarships for high-achieving students, but they are competitive. Ask at the school for opportunities.

The IB program is offered by a number of private schools. It is taught under the supervision of the International Baccalaureate Organisation. All students study languages, social science, experimental science, mathematics and arts.

There are over 3,500 different institutions offering higher education (enseignement supérieur) studies to over 2 million students. However, the Organisation for Economic Co-operation and Development (OECD) estimates that only 40% of young French people pursue higher education. The Ministry of Education provides information on institutes of higher learning.

To gain entry, students normally possess a Baccalauréat (Bac) or commensurate international qualification. If an applicant doesn't hold a Bac they may study a foundation course called the Diplôme d'accès aux études universitaires (DAEU). Some universities also admit a small number by recognition of professional experience and personal knowledge, provided candidates can also pass an entrance examination. Candidates from the EEC area need a good command of the French language and (if not part of an exchange programme) would need to apply direct to the university of their choice. French universities accept British A Levels as an entrance qualification, but not an American high school diploma. American students usually must spend a year at college or have a BA, BBA or BSc degree. Registration is made through a dossier de demande de première admission en premier cycle by February lst for entry the following October. Application forms are available from the cultural sections of French embassies.

French universities have adopted the European system of qualification: Bachelor (Licence), Masters, and Doctorate also called LMD. They have also adopted the ECTS credit system. However, some schools still teach the traditional curriculum which results in double standards and uneven standards. Some of the ancient universities are known as Masters of Arts (MA), with the option to graduate with an ordinary degree after three years or continue with the fourth year of study to obtain an honors degree. Grandes écoles admit the graduates of the level Baccalauréat plus 2 years of validated study whereas universities admit all graduates of the Baccalauréat. These schools and the technical institutes (IUT) have more selective admissions policies. These schools are also much more expensive at close to twice the price.

Licence and the Master degrees are organized in semesters: 6 for the Licence and 4 for the Master. These levels of study include various parcours (paths) based on UE (Unités d'Enseignement or Modules) which are worth a defined number of European credits (ECTS). A full-time student needs to complete 60 ECTS per academic year (between 1,500-1,800 hours).
Licence is awarded once 180 - 240 ECTS have been obtained.
Masters is awarded once 90 - 120 additional credits have been obtained.
Doctorat does not have a ECTS range.

Higher education is funded by the state and fees are generally low for universities. Tuition varies from €150 to 3,500 depending on the university and level of education (note that specialized schooling like private engineering/business schools can charge up to €8,900 a year). Students from low-income families can apply for scholarships which supplement tuition, textbooks, and can provide a monthly stipend.

Public universities in France are named after the big cities near which they are located, followed by a numeral if there are several. Paris has thirteen universities which are labeled Paris I to XIII. Many of these are actually in the suburbs. To avoid confusion, most take informal names - usually a famous person, place, or famous alumnus. In Paris, students can contact the Centre National des Oeuvres Universitaires et Scolaires (CNOUS, Tel. 01 44 18 53 00).

Panthéon-Sorbonne University or Paris 1
Address: 12 Place du Panthéon
75231 Paris, France
Tel: 33 (0) 1 44 07 80 00
This is one of the largest universities in France. Over forty thousand students are enrolled with degrees in law, political science, economics, management and humanities. The university is located in the Latin quarter (but first and second year students are often in the modern building in the south of Paris called Tolbiac) and occupies part of the Sorbonne and other prestigious French university buildings.

Université Paris II - Panthéon-Assas
Address: 12 Place Pantheon
75005 Paris
Tel: 33 (0) 1 44 41 57 00
Pantheon-Assas Paris II University, also known as Assas, is considered the best law school in the country. Pantheon-Assas has eighteen campuses in Paris with the majority of them located in the Latin Quarter.

Université Pierre et Marie Curie (UPMC)
Address: 4, place Jussieu
75252 Paris cedex 05
Tel: 01 44 27 35 44
Pierre and Marie Curie University is located on the Jussieu Campus in the Latin Quarter of the 5th arrondissement of Paris, France. It is the largest scientific and medical complex in France. It has over 125 laboratories, most of them associated with the Centre national de la recherche scientifique (CNRS).

Université Paris Diderot
Address: 5 rue Thomas-Mann
75013 Paris
Tel: 33 (0)1 57 27 57 27
Paris Diderot University or Paris 7, is one of the heirs of the Faculty of Sciences of the University of Paris. It focuses on Sciences and Mathematics.

Université de Paris
Address: 94 avenue Gambetta
75020 Paris
Tel: 01 44 62 40 40
The University of Paris was one of the earliest to be established in Europe. Founded in the mid-12th century, the university is often referred to as the Sorbonne or La Sorbonne.

Bibliothèque nationale de France
Address: Quai François-Mauriac
75706 Paris Cedex 13
Tel: 33(0)1 53 79 59 59
Also called Bibliothèque François Mitterand, BnF is the National Library of France. Located in Paris, it is a repository of all that is published in France. The current president of the library is Bruno Racine.

Do you have comments or personal information to communicate about this article? Add your comment.
Find links about education / school system in Paris and a lot more in The links of expatriation.
Find more definitions and general answers on expatriation issues in the Expat FAQ (Frequently Asked Questions).
Read more...


Go to the Forum to talk more about school system in Paris, education.
Search for members in France