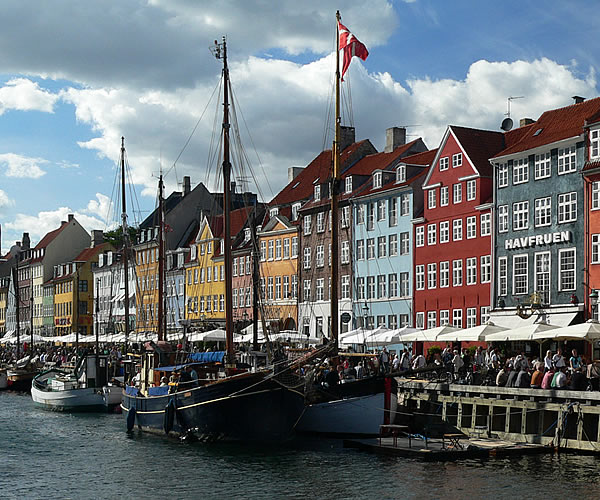 is the capital city of and is located on the straight between and , Øresund. The city is divided into 15 administrative and tax districts. Since completion of the Øresund road bridge and tunnel in 2000, the city has been joined with in to form the Øresund region. Many Danes now live in and commute into each day via the toll bridge.

The city was a great maritime power at one point and competed against the of trading cities. Today, it more often plays host to large cruise liners, which dock at Nyhavn in the northern part of the city. You will occasionally, however, see fairly large ships enter the waterway through the city, their passage facilitated by huge hinged bridges.

is a city on a very human scale and it is possible to reach most parts of the central area on foot. Walking from one end of the famous Strøget shopping street to the other takes around 15 minutes, assuming that you are not too distracted by the cafes, bars and shopping possibilities along the way.

is part of , although it is not located on the Scandinavian peninsular itself. The country is made up of a number of islands and it's only land border is that with . Around the border area, there is a degree of cultural overlap, due to the changing ownership of this disputed region over the years. The residents of some of these areas are able to choose whether they prefer to hold a German or Danish passport, depending upon which country they feel that they have the closes ties with.

Several of the islands are connected by bridge and there is also and extensive network of ferry services. is largely quite flat, with some gentle rolling hills in the southern parts of the country and higher ground in the area south west of Århus.

The climate in is relatively mild, with winter temperatures averaging around 0.5C and summer temperatures around 16C. It can, however, feel bitterly cold during the winter, due to the fierce wind that blows in from the sea on many days. Rainfall is quite frequent throughout the year and it is common to see snowfall during the winter. For those not accustomed to northern areas, the winters can feel long due to the limited hours of daylight. This is compensated for during the summer, where a really good night out can be judged based on whether it is already becoming light again when you are on your way home! At midsummer, it is only truly dark for a few hours each night.

Our network of international removal companies can move your furniture & possessions to Denmark and anywhere overseas.

Do you have comments or personal information to communicate about this article? Add your comment.
Find links about overview / geography of Copenhagen and a lot more in The links of expatriation.
Find more definitions and general answers on expatriation issues in the Expat FAQ (Frequently Asked Questions).
Read more...


Go to the Forum to talk more about geography of Copenhagen, overview.
Search for members in Denmark


The latest messages posted on the expat forums - Copenhagen