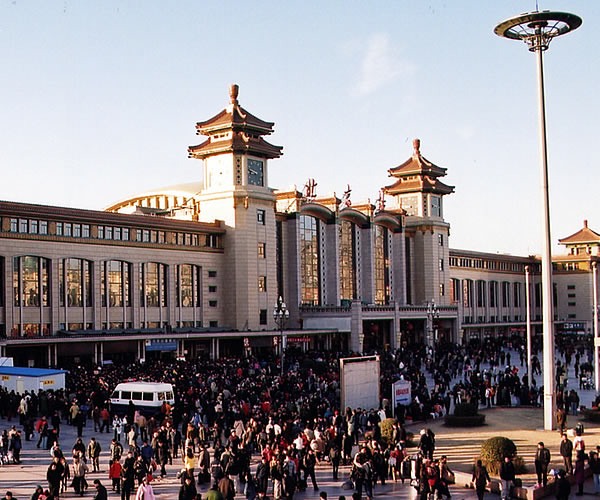 The official currency of the People's Republic of China is the renminbi ("People's Money"), often abbreviated RMB. The base unit of this currency is the RMB with an international currency code CNY. The official subdivisions of the RMB are the jiao with 10 jiao to the RMB. Most currency comes in the form of bills — even small change like the jiao. It also comes as a coin. In colloquial Mandarin, people often say kuai instead of RMB, and the jiao is also called the mao. A price of 3.7 would be read as "3 kuai 7 mao" (although the trailing unit is usually omitted).
The RMB is not legal tender in the Special Administrative Regions of Hong Kong and Macau, both of which issue their own currencies.

Counterfeiting is a serious problem in China and something you should be aware of whenever in China. All currency is subject to risk. The main focus is on the texture of different parts, metal line, change of colors under different lights. It is very common for Chinese cashier to scrutinize banknotes so don't be offended. When you get change, do the same (especially notes over 50 RMB). Salespeople may try to give you counterfeit money that they took from other customers as change. It is even possible to get counterfeits from ATMs, though less common. To be totally safe withdraw your money from the bank counter and say "I worry about jiabi (counterfeit)". Bank staff are understanding.

Outside of hotels, major supermarkets, and high-class restaurants, credit cards are generally not accepted. Most transactions will require cash. ATMs are all over the country and very common in Beijing. Many terminals only work with Chinese bank cards and not foreign cards (unless it is also a UnionPay card). Discover is the exception as they have an agreement UnionPay network. Most ATMs will charge a small and flat fee. Some ATMs require a 6 digit PIN. If you only have a 4 digit pin, put 2 zeros before it.

Before traveling you should confirm travel plans with your bank so they are aware that charges form a foreign location will be on your card. You should also inquire about the fees they charge and see if they have any recommended procedures as your bank may have great advice. It is common for home banks to charge a currency conversion fee between 1-3 percent. If you will be in China long-term, you should open a local account.

RMB is readily convertible in many countries, and places like Hong Kong or Vietnam will offer better rates. The Hong Kong dollar, US dollar, Canadian dollar, Euro, British pound, Australian dollar, Japanese yen and South Korean won can be easily changed in China. Southeast Asian currencies are generally not accepted, the exception being Singapore dollars, which can be changed at all major banks and licensed money changers.

Foreign exchange is under tight control in China. Some restrictions have been dropped, but it is still uncommon to see private money exchangers. In a bank, it usually takes 5 minutes to 60 minutes to process the exchange, sometimes a little faster in an hotel, depending on their experience. A form will need to be completed and you will need to how your passport. Keep the exchange receipt if you plan to leave the country with larger sum of money. Note that not all banks with the "Exchange" logo will exchange money for non-customers or for all currencies in cash.

Electronic money transfers to another country are no longer as difficult as they used to be. Just about every bank in the big cities offer this service. Service charges are variable (depends on the sending and receiving bank). The process can be slow taking up to a week.

The easiest way to complete a transfer is if you have a dual-currency account with the Bank of China. Electronic transfers to dual currency accounts incur no or very low fees. The time it takes is still about a week. Transfers to Chinese accounts from overseas also take from three to ten business days.

Western Union works through China Agricultural Bank and with China Post. Most people use these services to send funds. It is generally easier and cheaper than banks. This process can still have issues such as systems randomly being "down" or employee asking for excessive documentation.

Opening a bank account in China is a very straightforward process. For locally-owned banks you may only need your passport with a valid visa (tourist visas are acceptable). Banks usually charge a fee (around 1 percent) for depositing and withdrawing money in a different city than the one you opened your account in.

If you are employed in China, you may not get a choice. Many companies and schools deposit into only one bank, and therefore you must have an account with that bank to get paid.

If you want to move money abroad, from China or to China for example, Fexco provides efficient and secure global bank to bank transfers and bespoke payment solutions for both business and personal clients.

Do you have comments or personal information to communicate about this article? Add your comment.
Find links about practical life / bank services in Beijing and a lot more in The links of expatriation.
Find more definitions and general answers on expatriation issues in the Expat FAQ (Frequently Asked Questions).
Read more...


Go to the Forum to talk more about bank services in Beijing, practical life.
Search for members in China