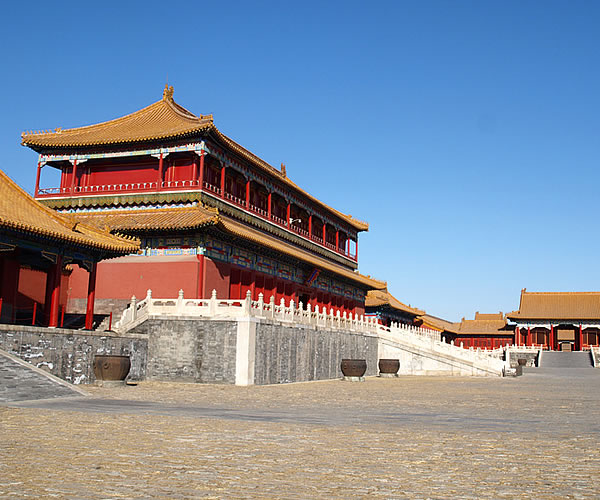 Tourism and Sightseeing in Beijing

Beijing is one of the most famous cities in the world. The mysticism and intrigue of the city has been written about for centuries, but in truth, the wonder of Beijing cannot be captured on the page. The amount of history, culture, and sights that must be seen within the city is almost unfathomable.

National Aquatics Center
Begun in 2003, this was a venue for the Olympics. It is currently a multi-functional facility for sports, culture and recreation, featuring a "water setting" for members of society. Located in the Beijing Olympic Green, it stands alongside the National Stadium.

Tiananmen Square
Telephone:8610-65243322
4 Jingshan qianjie (front street), Dongcheng District
Located in Dongcheng District, this is the world's largest public square at 440,000 square meters (about 109 acres) and accommodates 10,000,000 people. Surrounded by grand buildings including the Great Hall of the People, the Museum of Chinese History, the Museum of the Chinese Revolution, the Qianmen Gate and the Forbidden City, it is home to the Chairman Mao Memorial Hall and the Monument to the People's Martyrs. For an unusual look at the square and Beijing, get up early for the Flag Ceremony at Tiananmen Square. It takes place before sunrise and takes less than 15 minutes.
It is also notable for the Tiananmen Square protests of 1989. These were a series of demonstrations using non-violent methods, led by students and intellectuals. Sparked by mass mourning over the death of former CPC General Secretary Hu Yaobang, the protestors were trying to encourage continued economic reform and liberalization. Lasting seven weeks, the movement was put down by Premier Li Peng who declared martial law and ordered tanks and troops to clear the square. The exact number of civilian deaths is not known, and the majority of estimates range from several hundred to thousands. It is a must see for all visitors as an important place in Beijing, and an important moment in history.

The Forbidden City
This is the most important palace in the city. Located in the Dongcheng District, it was home for almost five hundred years to the Imperial Court during the Ming and Qing Dynasties. The Forbidden City is special in that it was not touched during the cultural revolution of communism. The complex consists of 980 buildings with 8,707 bays of rooms and covers 720,000 m2 (7,800,000 sq ft). The architecture exemplifies traditional Chinese palatial design and has influenced cultural and architectural developments of the world. It was declared a World Heritage Site in 1987 and is listed as the largest collection of preserved ancient wooden structures in the world.
The Palace Museum is also here and actually maintains the Forbidden City. It offers an extensive collection of artwork and artifacts built upon the imperial collections of the Ming and Qing dynasties.

Imperial Gardens
Parks and scenic areas brighten Beijing's cityscape. The most notable are the Beihai, Shichahai, Zhongnanhai, Jingshan and Zhongshan. These places are masterpieces of Chinese gardening art and popular tourist destinations.

Great Wall of China
How to get there: From the Southwest corner of Tiananmen Square, take the number 5 bus to the last stop. Or take Jishuitan subway station line 2 and walk east on the north side of the road to the bus station. Take bus number 919 (12 RMB one way, 4.80 RMB one way with pre-paid card, air conditioned coach bus) to Badaling. The last bus from Beijing to Badaling leaves at around 12:00, the last bus from Badaling to Beijing at around 16:00.
A one-day trip out of Beijing will take you to the Great Wall of China. In 220 B.C. sections of earlier fortifications were joined together to form a united defence system against invasions from the north. Orchestrated by Qin Shi Huang, construction continued up to the Ming dynasty (1368–1644). Upon completion, it became the world's largest military structure stretching from Liaoning Province through Hebei Province, Tianjin Municipality, Beijing Municipality, Inner Mongolia Autonomous Region, Shanxi Province, Shaanxi Province, and Ningxia Autonomous Region to Gansu Province within the country of China. Its historic and strategic importance is matched only by its architectural significance.
Condition of the wall range from excellent to ruined. The hike can be a challenge, although most people can complete it. Badaling and Juyongguan are nearest Beijing and are the most crowded sections of the Great Wall. Note that different sections have their own admission fees. Be careful when buying package deals around tourist locations in Beijing. Make sure you understand the terms and that you are getting a good value for what is offered.

The Summer Palace and the Old Summer Palace
No. 19, Xin-jian-gong-men Road, Haidian District, Beijing
Tickets: 20-60 RMB
The summer palaces lie in the western part of Beijing. The Summer Palace is a UNESCO World Heritage Site. It displays a comprehensive collection of imperial gardens and palaces that functioned as the summer retreat for the Qing Dynasty emperors.

Hutong
These historical buildings and alleys are symbolic of Beijing. They date back to when Beijing was the capitol of the RMB dynasty (1266-1368). Many neighborhoods are formed by joining one house to another to form a hutong. Since the mid-20th century, the number of Beijing hutongs has dropped dramatically as they are demolished to make way for new roads and buildings. There is growing movement to preserve these historical districts, so visit while they last.

The Imperial Palace of Prince Gong
Telephone:8610-66168149
A14, Liuyin Street, Xicheng District
Ticket: 20 RMB/person (Free for children below 1.2 meter)
In a quiet corner of Beijing, it is the largest and best-preserved imperial residence in China. It was the official residence of the Prince of the Qing Dynasty. It consists of two parts: the residence and the gardens.

Peking Man Site
Ticket: 30 RMB
50 kilometers (31 miles) southwest of Beijing, this is an important geographical site. It is a World Heritage Site and contains one of the first specimens of Homo erectus, and an assemblage of bones of the gigantic hyena Pachycrocuta brevirostris.

Lama Temple
Dongsi, Beijing, China, 010-64044499
Tickets: 20 RMB
Large complex with several gates and halls and countless buddhas. The largest of the statues is at the very back of the temple, an 18m buddha figure that fills a large building up to the ceiling.

Confucius Temple
13 Guozijian Street, Dongcheng, Beijing
Ticket: 25 RMB (student discount available)
Quieter than some of the other temples, it offers richly decorated halls and beautiful reflections in the small moat.

Beijing Zoo
Xizhimen Wai Avenue, Xicheng District Buses: 27, 347, 360, 632, 634, 714
The zoo covers an area of over 40,000 square meters with exhibits of bears, elephants, pandas, lions, tigers, songbirds, hippopotamuses, rhinoceroses, antelopes, giraffes and more. There are over 7,000 creatures of 600 different species, with the giant panda of China as a feature. It also sponsors zoological research.

There are many, many other things to see in and around Beijing. Explore and discover!

There are a vast array of tours and deals, but make sure you understand terms and conditions as China is adept at taking the most they can from tourists. Tours are available for special destinations (Great Wall of China, 13 Tombs of the Ming Dynasty), transport mode (by car, bus, bike, walking, rickshaw, etc), or by interest (history, art, heritage). Hotels and tourist offices will usually help you plan a trip or pick a tour.

As the Great Wall attracts massive amounts of people, it is one of the places that is easiest to get ripped off. A few tips will hopefully prevent that from happening to you.

Festivals in Beijing can overtake the city. The main elements are to bring happiness and well being and ward off misfortune and misery. Different festivals are celebrated all the year. Colorful celebrations of fireworks, food, and organized chaos enliven the already vibrant city.

Luckily, most attractions are extremely inexpensive so there are not as many discount options as in more expensive cities. Always ask about a student or senior discount. Many sights are vast and offer a choice of "access-all-areas" or "single-zone" tickets which is an easy way to save money if you have limited time or only want to see part.

Beijing Museum Pass: For RMB 80 up to three adults can get discounts to nearly all the city's main museums as well as several temples and cultural sights. They are valid through the entire calendar year. A limited number of booklets are available between late December and late January and can be purchased at main branches of China Post Offices or over the phone at 86-10-64177845 or from http://en.piao.com.cn/beijing/shouye.asp.

Do you have comments or personal information to communicate about this article? Add your comment.
Find links about entertainment / tourism and sightseeing in Beijing and a lot more in The links of expatriation.
Find more definitions and general answers on expatriation issues in the Expat FAQ (Frequently Asked Questions).
Read more...


Go to the Forum to talk more about tourism and sightseeing in Beijing, entertainment.
Search for members in China