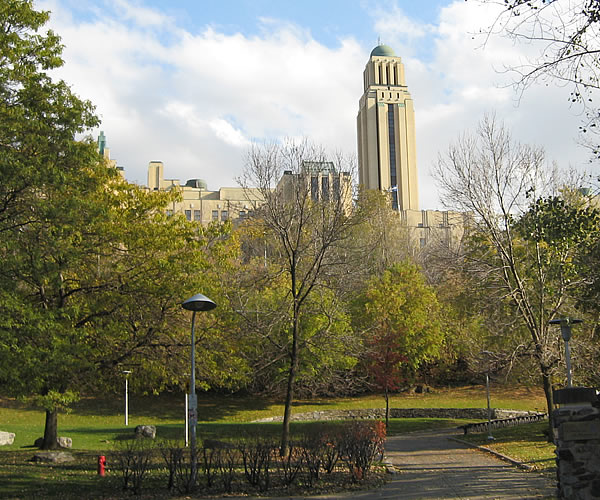 Primary and secondary education is publicly funded. Schooling begins with kindergarten at age 5 and ends with Grade 12 (at about age 18) in a K-12 system. It is administered by the Ministry of Education (Ministère de l'Éducation)

Children attend school Monday to Friday for six hours a day for approximately 190 school days per year. The school year begins in September, after Labour Day, and finishes at the end of June. Students receive a one to two week break from school at Christmas, a week break in either February (Spring Break) or March (March Break), as well as public, provincial, and territorial holidays.

The system within Québec is overseen by the Ministry of Education, Recreation and Sports (Ministère de l'Éducation, du Loisir et du Sport). The education system is made up of public and private French and English educational institutions. Education is compulsory in Canada up to the age 16. The primary language of instruction is French. Québec's education system is a bit different from Canadas in that it has four levels:

Education is free at the elementary, secondary and college levels. University students are required to pay tuition, which is relatively low by North American standards.

Québec has publicly funded French and English schools. According to the Charter of the French Language, all students must attend French language public schools, except:

These rules do not apply to temporary residents of Québec or First Nation children. If a parent had the right to attend English schools, but did not, they do not lose the right for their children. English is taught as a second language in French schools from Grade 1, and a few schools also offer English immersion programs for advanced students. English schools offer a wide range of programs that include French as a second language, French immersion, and fully bilingual programs that teach both English and French as first languages.

Kindergarten (maternelle) begins between the ages 5-6 and primary or elementary school (école primaire) ends in either Grades 6 or 8. Middle schools or junior highs are intended to prepare students for secondary education. These schools generally offer Grade 5, 6 or 7 to 8 or 9.

At a primary school level, one classroom teacher instructs students in all general subjects. Specialized teachers may instruct students in music, visual arts, or physical education.

Québec has the highest proportion of children going to private schools in North America with about 17% of the student population. This number rises even higher, at about 30%, within the city of Montréal. Private schools may be the best option for an expat family as they can offer an elevated level of education, or cater to a specialty like language or religion. Most private schools are secondary institutions, though there are a few primary schools. Private secondary schools usually select their students by having them go through their own scholastic exams and by making a study of the entire primary school record.

It is important to visit a school to determine the best fit for you and your child. Most private schools have open days for prospective parents, but it is wise to ask to make an appointment to visit on a normal working day.

Fees range from school to school so make sure to compare. The government of Québec gives a pro rata subsidy for each child to any private school which meets its standards and follows its prescriptions. To receive a grant, private and independent schools must be accredited in Québec and hire certified teachers. This can reduce tuition to approximately 30% of non-subsidized private schools. Ask at the school for scholarship opportunities and subsidy information.

Extra activities like instrumental instruction, school uniforms, or school trips may require additional fees. Many private schools have their own second-hand shops selling uniforms and other supplies.

All girls school serving grades 7-11. It was established as the first English girls; school in Montréal.

An English co-ed school with a strong French program, this school serves kindergarten to 6th grade. It was founded in 1947 on Catholic traditions, but today welcomes all religious backgrounds.

Founded in 1955, the CRA is a secondary school with instruction in French. The building and building are owned by the Sisters of the Congregation of Notre-Dame. The College is also a member of the Federation of Private Educational Institutions (FEEP).

A private French-language educational institution offering secondary school and CEGEP college-level instruction. It is a co-ed establishment for students in their final year of secondary school and in college. It is boys-only in the first four years of secondary school. It retains a dress code, but no specific uniform. It also provides a boarding school for college students wishing to reside at the college from Monday to Friday.

Elite private French-language high school. Prospective students must pass an entrance exam to be accepted in the school. A maximum of 350 students are admitted each year to form and maintain 10 groups of 35 in each grade. Students must wear uniforms.

An elementary and secondary level co-educational private school offering classes from Kindergarten through Grade 12. Students graduate from Grade 11, and then have the option of leaving the school and going on to CEGEP, which is the university preparatory system in Québec, or returning to LCC for the Pre-University year.

Post-secondary education in Québec begins following Grade 11, also known as Secondary V. Québec is the only province that requires 11 (rather than 12) years of study in order to obtain the high school diploma. While standard admission to college is based on the secondary school diploma of Québec (representing completion of grade 11), completion of the two-year college program does not give students the equivalent of a university Diploma. Holders of the two-year college diploma still must complete a minimum of three years of university education in order to obtain a Bachelor's degree.

There are a mix of French and English, private and public universities in Montréal. Degrees include undergraduate (3-4 years), master's (2-3 years) and doctoral (3-5 years) programs. The degrees awarded meet the highest international standards. The fall semester begins at the end of August or in early September. The winter session begins in the first week of January. Some universities offer a summer session which normally runs from early May to mid-August.

Public collegiates in Québec are commonly referred to as CEGEP (Collège d'enseignement général et professionnel), known officially in English as a "General and Vocational College". CEGEP can only legally be used to describe state-run post-secondary schools, but this is not strictly adhered to. CEGEPs offer two-year pre-university programs and three-year technical programs leading to a Diploma of College Studies (DCS). They also provide shorter technical programs leading to an Attestation of College Studies (ACS). These students can specialize in a number of different vocational or pre-university fields.

Tuition fees are lowest in Québec, which receives the most public funding for post-secondary education in Canada. Public CEGEP's have little or no tuition fees. Some Canadian universities may offer entrance scholarships ($500-$10,000) to encourage international students to enroll.

Many people take out private loans to facilitate higher education. Private companies, such as the Paras Education Foundation, offer student loans to international students studying in Canada. No collateral or margin money is required, and repayment periods are up to 20 years. Loans are available to all international students, regardless of nationality, with a cap of up to $65,000 USD per year per co-guarantor. Interest rates range from 7% to 8%. The Global Student Loan Corporation offers similar services and does not require a Canadian cosigner. In addition to covering your tuition, Global Student Loan Corporation also provides funding for other school related essentials such as insurance, electronics, travel, and housing.

Public university with English as the primary language of instruction. It is among the largest in Canada with about 45,000 students. The school ranks highly in Canada and internationally in fields such as fine arts, social science, journalism and engineering.

ETS is a public engineering school which specializes in applied teaching in engineering and technology transfer. It is ranked first in Québec and third in Canada for the total number of engineering diplomas awarded annually.

An engineering school affiliated with the University of Montréal. It ranks first in Canada for the scope of its engineering research.

HEC Montréal (formerly known as: école des Hautes études commerciales de Montréal), is the independent affiliated business school of the Université de Montréal. It is the oldest management School in Canada and holds accreditations from AACSB, EQUIS and AMBA - one of three schools in North America to hold triple accreditation in management education. It favors a multilingual approach to business education, offering bilingual (French and English) and trilingual (French, English and Spanish) bachelor's degrees, and graduate degrees both in English and in French.

McGill University is an internationally-renowned research university. It is listed among the top 20 universities globally. Approximately 34,000 students attend McGill, with international students comprising one-fifth of the student population. The language of instruction is English, but students have the right to submit any graded work in English or in French, except when learning a particular language is an objective of the course. Notable alumni include eight Nobel Laureates, one hundred and thirty-two Rhodes Scholars, three astronauts, two Canadian prime ministers, eleven justices of the Canadian Supreme Court, three foreign leaders, nine Academy Award winners, three Pulitzer Prize winners, and twenty-eight Olympic medalists. McGill University is one of two member-universities of the Association of American Universities situated outside the United States.

The Université du Québec à Montréal is a public French-language university. It is the largest constituent element of the Université du Québec (UQ). The school was founded on April 9, 1969 by the government of Québec, through the merger of the école des Beaux-Arts de Montréal, a fine arts school; the Collège Sainte-Marie, a classical college; and a number of smaller schools. Although part of the UQ network, UQAM possesses a relative independence which allows it to print its own diplomas and choose its rector.

Montréal has an elaborate library network known as the Montréal Public Libraries Network (Réseau des bibliothèques publiques de Montréal). It is the largest French language public library system in North America. It also has items in English and other languages.

Do you have comments or personal information to communicate about this article? Add your comment.
Find links about education / school system in Montreal and a lot more in The links of expatriation.
Find more definitions and general answers on expatriation issues in the Expat FAQ (Frequently Asked Questions).
Read more...


Go to the Forum to talk more about school system in Montreal, education.
Search for members in Canada


The latest messages posted on the expat forums - Montreal