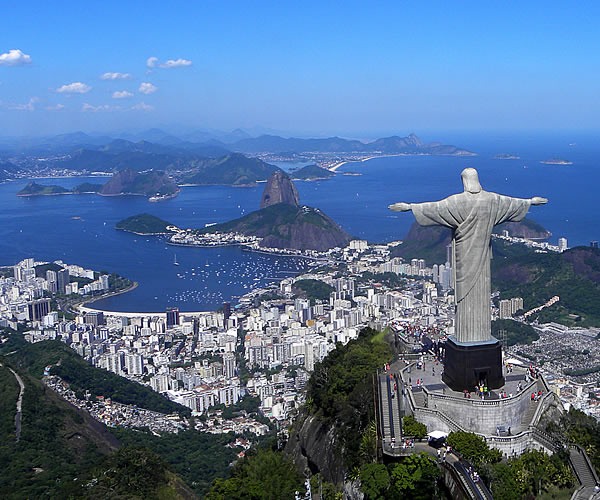 Indigenous people first cultivated this area, arriving over 8,000 years ago by crossing the Bering land bridge into Alaska and then spreading across North and Central America. At one point, there were as many as 2,000 nations and tribes seven million people. The indigenous of Brazil were mostly semi-nomadic tribes who subsisted on hunting, fishing, gathering, and migrant agriculture.

The Portuguese arrived in 1500 with Pedro Cabral leading the colonization. The Portuguese were first interested in the Amazonian brazilwood (for which the country was named). The Europeans had little respect for the native people and infighting between the tribes and with the European population, plus disease, decimated the indigenous population. Today, fewer than 200,000 of Brazil's indigenous people survive with just a few tribes in remote corners of the Amazon rain forest.

The territory was only loosely guarded at first and there were several invasions by other European powers. This changed in the 17th century as the production of sugarcane developed. Grown in plantation's called engenhos along the northeast coast of the country, Portuguese originally tried using the indigenous as slaves. This practice was not successful and so began the import of black slaves from Africa. This mixing of races and cultural, including the European frequently intermarrying with both the Indians and the African slaves, led to the unique variety in Brazilian culture.

In 1808, the Portuguese court fled Napoleon's invasion and established their government in their colony of Brazil, in Rio de Janeiro. It was from here that the Portuguese king, João VI, ruled his empire for 13 years. Issues in Portugal eventually called the crown back and the King's eldest son, Pedro, stayed in Brazil. Pedro was an advocate for the secession of Brazil from Portugal but was eventually removed in 1831. Pedro's five-year-old son, Pedro II, was left to succeed him which he eventually did in 1840. During Pedro II's rule, he oversaw the abolition of slavery in 1888 with his daughter, Princess Isabel, signing the Aurea Law.

Pedro II was ousted by a Republican military coup. Coffee production had become the dominant industry in the 19th century and brought in around one million European immigrants, changing the face of Brazil. Tired of an emperor's rule, wealthy coffee businessmen backed the coup which was the end of Brazil's imperial history. The coup was led by General Deodoro da Fonseca who became the country's first de facto president. From 1889 to 1930, the government was a constitutional democracy. This period, known as the "Old Republic", ended in 1930 with another military coup that placed Getúlio Vargas, a civilian, in the presidency.

Brazil's struggles today with a highly unequal distribution of wealth. By the 1990s, one out of four Brazilians continued to survive on less than one dollar a day. This social and economic issues led the 2002 election of Luiz Inácio Lula da Silva, the first working-class president. He has worked to increase to the minimum wage, to cut retirement benefits for public servants, and to establish the Fome Zero (Zero Hunger) program. Since 2005, Lula's government has dealt with allegations of corruption misuse of authority. Despite this, Lula was re-elected President in the general elections of October, 2006.

A sign of Brazil's development has been its successful bid to host the 2016 Summer Olympics.

Rio, like most of Brazil, was discovered and first explored by the Portuguese. On January 1, 1502 a Portuguese expedition led by explorer Gaspar de Lemos came upon the city. The time of year and location next to the river inspired the name of the city, "January River". However, it was first settled by the French Huguenots in 1555 who built Fort Coligny on Villegagnon Island when attempting to establish the colony for France. During this time the city was officially founded on March 1, 1565, but only portionally cultivated until the early 18th century as it was the only city through which gold from the interior could legally be exported.

In 1763, Rio replaced Salvador (Bahai) as the seat of the governor general of Brazil. It was also chosen as the capital by the royal court of Portugal when it had to abandon mainland Europe in 1808. The city remained the capital of the Brazilian empire, and the federal republic, until 1960 when Brasilia became the new capital. Elected in 1955, Juscelino Kubitschek had promised to develop a new, more advanced, capitol. Rio was made the capital of the newly enlarged state of Rio de Janeiro in 1975.

The beauty of the city combined with the fame and luxury of the Copacabana Palace Hotel evoked a strong sense of the exotic in the 1930s and foreigners from around the globe dreamed of Rio. Cariocas is the name given to residents of Rio de Janeiro and is given to the variety of Brazilian Portuguese language spoken in Rio. An important word in Brazil, simpatico, refers to a person that is friendly, agreeable, and good-natured. The Cariocas of Rio exemplify this idea. Throughout the 20th century Rio has continued to reign as a golden city of natural beauty and cultural vibrance. The announcement that Rio would host the 2016 Olympic Games only confirmed its upwardly mobile status.

Do you have comments or personal information to communicate about this article? Add your comment.
Find links about overview / history of Rio de Janeiro and a lot more in The links of expatriation.
Find more definitions and general answers on expatriation issues in the Expat FAQ (Frequently Asked Questions).
Read more...


Go to the Forum to talk more about history of Rio de Janeiro, overview.
Search for members in Brazil